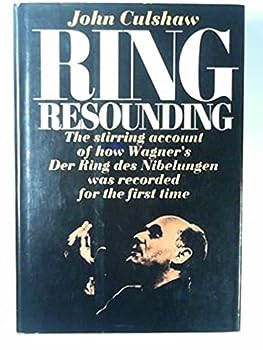 By John Culshaw. The stirring account of how Wagner'g Der Ring des Nibelungen was recorded for the first time. Published by The Viking Press, New York. This description may be from another edition of this product.

Published by Thriftbooks.com User , 15 years ago
This is one of a handful of books indispensable to the history of "classical" recording. It relates the on-again, off-again, 7-year history of what it took to record the first complete, commercial RING. (Other such books include Roland Gelatt's THE FABULOUS PHONOGRAPH; the Legge-Schwarzkopf ON AND OFF THE RECORD; and Culshaw's posthumously published memoir PUTTING THE RECORD STRAIGHT - in which Culshaw's observations are far less reserved than in RING RESOUNDING - and he names Names.) The 1972 Time-Life edition of RING RESOUNDING is the one to have - if you can find a "seperate" copy. (Originally, it was leather-bound, in a big black box, together with Peter Gutman's 1968 Wagner bio and Bernard Shaw's The PERFECT WAGNERITE.) Not only is the layout more generous, with thick, glossy pages, but in this edition we get many more photographs of the Solti RING artists - most of them taken by Hans Wild at the actual recording sessions. (The commerical hard-cover edition of 1967 has only a few pages of smaller-sized photos.) Granted, Culshaw had his blind-spots and biases. Still, it is perilously easy to look down on this man and his work when, in terms of appreciation and musical hindsight, we "record collectors" of today are standing on his shoulders. Because without Culshaw and his Decca-mates (Ray Minshull, Gordon Parry, Erik Smith, Christopher Raeburn & CO.)- without them, such a thing as the Solti RING would have taken much longer to materialize...And by THAT time, it would have been too late to capture (in stereo/hi-fi sound) the last generation-or-so of great Wagnerian singing which we can hear on the Solti RING. If this sounds like an exaggeration, consider that : 1) Kirsten Flagstad's terminal illness cut short her "comeback," within a year of her RHEINGOLD Fricka. 2) Within five years of this RING's completion in November 1965, Wolfgang Windgassen retired (and died soon thereafter). 3) Soon after the mid-1960s many of the older players, who formed the last vestige of the pre-war Vienna Philharmonic, began to retire - taking with them a unqiue, burnished sound. (In time, even the Concertgebouw and the Vienna Philharmonic got infected by the Post-Jet, Post-Karajan "International Sound.") That is to say, Culshaw and his team were able to record this RING, in state-of-the-art sound, only just in time. True, if you can put up with some smeary orchestral playing, there is always the stereo '67 Bohm/Bayreuth RING on Philips- with a host of great singers, including Wolfgang Windgassen and Birigit Nilsson (who preferred her Bohm/Bayreuth performance to her Solti/studio one). And yes, the live Bayreuth RINGs of the 50s (Krauss '53 and Keilberth's early stereo '55) allow us to hear several of Solti's singers, in younger and fresher voice...But remember that due to various "contractual" problems, these performances would not be legally OR widely available for decades to come. (Just for "starters," EMI had a "lock" on any Bayreu

Published by Thriftbooks.com User , 18 years ago
I got this book s part of a boxed set of Solti's Der Ring desNibelungen back in 1976. Culshaw was the sound engineer on theSofiensaal recording of Wagner's Ring, beginning in 1958, thepreparations took years to bring to fruition, and the whole ef-fort was a gamble on Decca/EMI/London's part, as noone was tot-ally sure that the record buying public would support financial-ly such a monumental recording. Just as the logistics of get-ting an internationally famous assemblage of singers weren'tdaunting enough, there were the gargantuan tasks associated withrecording this Mount Everest of music-and getting it right, without having to recall singers, conductor, and musicians again andagain. This part is absolutely fascinating, and if one gets thedvd/video as a an illustration, one will get a very fine appre-ciation of the tremendous efforts that go into the making of anyoperatic recording.This effort made it feasible for whole operas to be recorded andsold, not to mention pioneering recording techniques that con-tinue to be refined to this day.You really want to understand what goes into making an opera re-cording tick? Or what efforts go into recording sound? Thenbuy this!!!!!!!!!!!!!!!!!!!!

A mostly absorbing glimpse into the world of recording

Published by Thriftbooks.com User , 20 years ago
I was in elementary and junior high school when the legendary first-ever recording of Wagner's Ring Cycle was being set down and released. I did not get interested in opera until junior high and did not have access to the recordings until later, but in the meantime I did find and read this fascinating book, and have read it several times in the meantime.Culshaw begins by giving some background: the earlier attempts on the part of Decca/London to record and issue a Ring the "easy" way (by going to Bayreuth and taking one down, which they tried in both 1951 and 1955); their ultimately successful attempt to snag Kirsten Flagstad, who had retired from recording, into the Rheingold cast; and the early attempts at creating stereo productions for the phonograph which finally jelled when they got around to recording Das Rheingold.There are many, many fascinating stories within the main fabric of the tale, and it would take a review much longer than 1,000 words to even mention all of them. For example, although the reasons had to do mostly with the technical quality of the recording, this first-ever Das Rheingold captured the imagination of the opera-buying public in a way that nobody could have imagined or expected, despite the doubts of the competition and the lack of interest on the part of the Wagner cognoscenti. Another story is that of Kirsten Flagstad's tragically deteriorating health which ultimately prevented her from participating in any of the other operas, despite the glimmers of hope that kept flickering and the constantly changing plans Decca/London made to accommodate her. The story of the young unknown tenor who was supposed to be the ideal Siegfried except that he was unwilling to take the time to learn the role is a study in frustration. On the lighter side are the tale of the horse the producers brought into the studio to surprise Nilsson during the recording of Gotterdammerung, and the story of Regine Crespin's kicking James King in the shin during the recording of the Walkure Act I love duet.Culshaw has a definite way with words and thus has the ability to allow the reader to feel the tension, time pressures and catharses involved in the recording sessions. One example of this is his description of Decca/London's attempt to record an acceptable Rheingold prelude--in the middle of the night yet!--given that the first half of the piece could not be edited because of the way it is written, and so had to be recorded without mistake; the tension here is almost palpable. It is in areas such as this where Culshaw is at his strongest.Unfortunately, sometimes Culshaw fails to understand the power of his pen and as a result the book also has its weak and even offensive areas, usually centered around the author's own prejudices. For example, he dismisses the 1951 Bayreuth Gotterdammerung, which Decca/London almost issued but did not, as an inferior performance except for the Brunnhilde and the Hagen. However, this performance was fina

Published by Thriftbooks.com User , 22 years ago
It's an unexpected thing to say about a backstage book (not a genre I'm fond of) but this is an inspiring book about artistic collaboration, and a dream fulfilled. The recording it celebrates can now be seen to be not without its flaws. For example it's tragic that Hotter's vast voice had gone "woofy" by the time they recorded Walku:re, the last of the cycle to be recorded. Despite the awesome conviction and power of Hotter's vocal acting, he wasn't beautiful, and the transformed Wotan at the end of Act III has to be beautiful. And it's a shame that they replaced Paul Kuen's excellent, musical, Mime with Gerhard Stolze's over-the-top cackling, which has not worn well with time. But the Culshaw book helps put these flaws (and I can't bring myself really to consider Hotter a flaw, on balance) into perspective against the grandeur of the achievement - which, though complete Ring cycles are now common, remains unchallenged. Culshaw himself is a fine, clear and sometimes amusing writer and, it seems, a likeably modest and decent man. For example he kindly withholds the name of the tenor, a potential superstar as Siegfried, who nearly killed the project by refusing to study his role. It's now known that that was Ernst Kozub, by the way, and you can consider Culshaw's claims about the magnificence of his voice by listening to his Erik on the Klemperer "Fliegende Holla:nder". He must be kicking himself to this very day. On the other hand, the story of Wolfgang Windgassen's artistic integrity and decency in stepping in and singing to save the recording, even while his agent was still working out the contracts, only adds lustre to the excellence of his performance. And if it were in a movie ("The hell with this; I'm going in to sing") no-one would believe it.Kirsten Flagstad appears as perhaps the most loveable soprano, or singer of any kind, I have ever heard of, and the story of her death still, when I read it again, brings tears to my eyes. Culshaw's considerably more guarded treatment of Birgit Nilsson, undoubtedly a fine artist, tells a very different story... It's also inspiring to read about record company management who were not solely motivated by the bottom line. Perhaps nowadays that would see the book classified as science fiction. :) Good book. The best of it's kind. Recommended. (And they should re-print it.)Laon

Published by Thriftbooks.com User , 23 years ago
Justly called everything from "the greatest recording of anything" to "the insurpassable", the legendary Ring of the Nibelungen Cycle deserves its rich history. Most audiences' eyes will have already been caught by this fabulous work of Wagner's incredible genius, from the Levine/Behrens performance with the Metropolitan to the original Bayreuth productions. Though there is an abundance of Ring recordings and several very fine complete Cycles on compact disc, few can even compare to the stunning Solti recording. John Culshaw's chronicle of the events leading into the titanic, historic feat of the Sofiensaal recording of the Ring is a stunning, open memoir. There is valuable insight into the character of many of the singers, musicians, and producers. There are unusual tales told in this book, from Regine Crespin's kick to insults directed at Kirsten Flagstad. Furthermore, the entire book is written in an easy-going manner, so that it in no way resembles a stuffy, pompous book that could scare off the general populace. Even if you are not familiar with the Ring Cycle, the book is an excellent stepping-stone. To those who are, especially with the Solti recording, the book is invaluable. Reading it will add a whole new dimension to the music: memoirs include countless events, including the orchestral squabbles with Decca at Die Walkure, Joan Sutherland's and Kirsten Flagstad's seemingly inadequate roles, Birgit Nilsson's performances, and the death of a beloved cast member of Das Rheingold, before the Ring's final, complete release. The photographs are also tasteful: though many of them directly chronicle the event of recording, a great deal of the others set the mood of Vienna and the past history of the Ring. This book is indeed rare-I found only one copy at the local library. Yet it is to me the most important book of its kind. A must-have to all interested.
Copyright © 2022 Thriftbooks.com Terms of Use | Privacy Policy | Do Not Sell My Personal Information | Accessibility Statement
ThriftBooks® and the ThriftBooks® logo are registered trademarks of Thrift Books Global, LLC