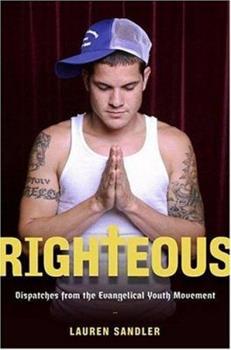 There?s a new youth movement afoot in this country. It?s a counterculture fusion of politics and pop, and it?s taking over a high school near you. Like the waves that came before it, it?s got passion, music, and anti-authority posturing, but more than anything else, this one has God. So what does it mean when today?s youth counterculture has a mindset more akin to Jerry Falwell?s than Abbie Hoffman?s?In RIGHTEOUS: Dispatches from the Evangelical Youth...

Published by Thriftbooks.com User , 15 years ago
Lauren Sandler opened my eyes to Christian counter culture's ability to provide a sense of belonging for so many isolated kids in return for their total commitment to the "inerrancy" of the Bible. I was angered by required regression of feminist liberation and saddened by the willingness of young women to accept subjugation to their husbands and function primarily as breeding stock. Listening carefully to the casual conversations of younger people in social settings around me, I heard evidence that "Righteous" identifies a very real threat to my right to choose. But it also offers plausible solutions to using the mind-bending strategies of the Evangelical Movement successfullu against them. Well-written and researched with keen observations from a very intelligent author.

Wake Up call for Secularists

Published by Thriftbooks.com User , 15 years ago
This book reads like a very personal and entertaining ethnography. The author is not content to study her subjects from the outside, and an outsider she admittedly and proudly is; rather she employs a more participatory technique, submerging herself in the communities she hopes to expose. I can't help but wonder how her subjects will feel, how many evangelical types may take offense to this. Most evangelicals feel Christianity is not a religion. It is the truth. To call it a religion and to study it as if it is one belittles it in their eyes. A Christian reading this book might feel something like Oscar Meyer reading Sinclair's The Jungle. Yet, I think to the author's credit, she did something Sinclair couldn't do. She connects with these communities as much as possible, given their vastly different world-views. We learn more about these people than their religion. We learn of their warmth, their humanity, their strengths and needs. Yes, for me this was the most commendable part of the book. The author finds common ground with her subjects; so much so that she shares with the reader when she feels her heart-strings pulled and her eyes fill with tears in more than one church service; the draw of a ready-made, accepting and loving community. She wants to know why so many people are drawn to evangelical Christianity, so she goes and finds out first-hand. She even goes so far as to admit that she could have easily converted if she was perhaps younger, and yes, sorry, more naive (my word). Her analysis: what these people are trying to escape from is the postmodern condition, the lack of love and a feeling of belonging, the overwhelming effect of relativism and information overload, lack of identity and community. Christianity answers these needs in a way that secular society has failed. But the dark underbelly is that this new generation of evangelicals will not rest until they've conquered the world, or changed it sufficiently to bring on the second coming. Her quest seems to derive in part from being stumped on how a documented liar can lead a country into war under false pretenses and yet still be re-elected. How could this happen? If you've ever wondered this, I would highly recommend this book. It opens the lid on a community that many secularists don't take the time to engage. And not that this is entirely our fault, considering the quality of dialogue and debate one can have when one's counterpart got all the answers beforehand directly from God. But it provides a real answer to why the current political drift in this country is underway. It is alarming, and I must say more all-encompassing than I had realized. It also plays with another interesting theory that I'm happy to see addressed in print. The affinity many evangelicals have toward the idea that we are all living in the last days (how can they not apreciate how common this belief has been since the time of Jesus?), dovetails nicely with a dismissive attitude toward 'worldy'

Published by Thriftbooks.com User , 16 years ago
Readers who are enraged by this book should take a really good hard look at themselves. Despite the fact that I am not an atheist, if given the choice between secularism and fundamentalism, I'd opt for the former. The fact remains that in a democratic multicultural society, secularism works best (sorry!) because it leaves room for *choice*. The tone of the reviewer (AlteredBeat) below is frightening. She/he should reread this book because nowhere does the writer defend Islam. This is simply racism, paranoia and poor reading skills on the part of the reviewer. And anyone who refuses to see that Bush's administration has turned our current war into a religious (Christian) crusade is either deluded or is a fundamentalist Christian himself/herself. Ignorance is not bliss. It's time that we, as a nation, did a comprehensive body count. In it, we need to include the women who are simply "blessed" for being baby-making machines in the name of Jesus.

You can be even handed, and still come out swinging

Published by Thriftbooks.com User , 16 years ago
Righteous is pretty much just that: righteous. It's a sobering look at a generation who have turned away from critical thinking, science, tolerance, in favor of a christianity which can never stray from the literal word of the bible. These kids and young adults attend christian colleges where their professors "debunk" evolution. Even the skate-punks in this "disciple generation," with their tattoos and baggy clothes, believe that their mission is to "save" the rest of their generation, because the end is nigh. I found all of this to be a terrifying indictment of where this country is heading. With an unparalleled access to information and technology, many of our youth are nonetheless opting for the 2,000 year-old comfort of fundamental christianity. They have agendas, as the book points out, like "repopulating cities with christian voters," or larding the halls of congress with their christian academies' grads. In the face of this terror, Sandler is never cruel to her subjects--she really tries to understand, and present to the left, how and why these people are drawn to the new fundamentalism. She says at one point that she even comes close to feeling some tinge of rebirth. (turns out it was something else, which is hilarious, but i won't spoil it here). As kind as she is to her subjects, she never lets us forget that this is the end of times in many ways--the end of the secular world's chances at building communities as connected as the fundies, before it's too late. If it sounds alarmist, that's because it is. This is a war, and the author is part journalist, part conscientious objector, part soldier. Scary world we live in, right here at home. I only hope that Sandler's kindness toward her subjects impels some of them to pick it up, and rethink some of their "values." That would be salvation to me.

As objective as she needs to be...

Published by Thriftbooks.com User , 16 years ago
First of all let's stop all the "this author isn't objective" garbage. Who is objective anyway? Not me. Not you. And not the good folks who review books on this site. Let's leave objectivity to the journalists (yeah, right). Anyway, Sandler's book is the first of it's kind. There are a lot of books looking into the intersection of right-wing religious groups and politics, but none to my knowledge have looked into how youth from a broad demographic have come to make up a wide variety of right-wing, wrath-of-god-fearing evangelical youth movements. This book is an important and much needed contribution to the larger discussion of the dangerous intersection of religion, politics and culture. One of the most revealing and unsavory aspects of the book is how Sandler effectively reveals the contemptible recruitment tactics employed by the groups (predators) out there which take advantage of youthful fears, uncertainties, the desire for meaning and the desperate need to belong. Their insidious tactics excel at manipulating kids, teens, young adults at their weakest and most vulnerable. These things I find a deplorable. This is a fine book which reveals how progressives must pay attention to the real emotional, existential and spiritual needs of our youth. We must help them find and use secular, enlightened means of achieving lasting value and meaning in their lives; not by means that exploit youth in vulnerable moments, but by means that are rooted in healthy questioning, open mindedness and individual choice. And as Sandler makes clear, these are certainly not the means employed by the various evangelical youth movements. By the way, if an individual makes an uncoerced decision to live by the teachings of the Bible, that's fine by me and many progressives I know. A terrific, much needed read.
Trustpilot
Copyright © 2022 Thriftbooks.com Terms of Use | Privacy Policy | Do Not Sell or Share My Personal Information | Accessibility Statement
ThriftBooks® and the ThriftBooks® logo are registered trademarks of Thrift Books Global, LLC