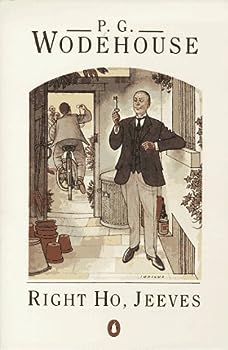 (Book #6 in the Jeeves Series)

This description may be from another edition of this product. Follow the adventures of Bertie Wooster and his gentleman's gentleman, Jeeves, in this stunning new edition of one of the greatest comic novels in the English language. Bertie must deal with the...

Published by Thriftbooks.com User , 16 years ago
"...write about Wodehouse and you tread on hallowed ground. He's a writer people mind about intensely, a writer who, without strong feelings himself, encourages the most vehement reactions." - Robert McCrum "No library, however humble, is complete without its well-thumbed copy of 'Right Ho, Jeeves,' by P.G. Wodehouse, which contains the immortal scene of Gussie Fink-Nottle, drunk to the gills, presenting the prizes to the delighted scholars of Market Snodsbury Grammar School, built around 1416." -John Le Carre An acquaintance of mine who was then recently introduced to Wodehouse, when I was trying to encourage him to embark on the journey of devouring the whole canon, asked me a question that is often put to Plum(Wodehouse was called Plum by those who loved him - he still is) devotees, ''What is your favorite Wodehouse?'' Now, that is what I call a very difficult question to answer. Take the case of someone visiting the Tulip Gardens of Holland being asked about the single flower he liked most among the breathtaking sight of all the flower beds symmetrically laid; wouldn't that someone be baffled to no end? Or like Shakespeare's Othello, be perplex'd in the extreme? I feel very similar when I am faced with the question. :) I love all of the master's works like ''how the male codfish which, suddenly finding itself the parent of three million five hundred thousand little codfish, cheerfully resolves to love them all''. The books have never failed to put a smile on my face in many a dull moment of life caused by the heart-ache and the thousand natural shocks that flesh is heir to. I think the best way to go about reading Wodehouse - the way I employed to wade through the whole Canon of 100 odd books - is to start at the Jeeves and Wooster series featuring the adventures of the kind hearted blundering upper class British man about town Bertram Wilberforce Wooster and his omniscient, omnipotent, Spinoza reading Gentleman's personal Gentleman, Reginald Jeeves and after that pounce on the Blandings Castle series featuring the absent-minded Peer, Clarence, the 9th Earl of Emsworth at the helm of affairs and his paraphernalia complete with his hat trick medal winning Berkshire sow, the Empress of Blandings. There are fourteen of Jeeves and Wooster Novels and an almost equal number of Blandings castle novels. After fraternizing with the above mentioned sterling creations of the master, one should not miss the escapades of Psmith (the P is psilent as in Pterodactyl), Uncle Fred and a lot more of other interesting creations. Before I proceed further, there is more to be said about Uncle Fred. He is a peer mostly confined to the country side and on the occasions he is unleashed on London, those being the occasions when his better four-fifths is away visiting friends or on some other errand that keeps the redoubtable Uncle Fred away from her temporarily, he tends to ''step high, wide and plentiful''. I do not know if you are familiar with the w

Maybe Mephistopheles was a bad idea after all...

Published by Thriftbooks.com User , 18 years ago
You know things are going bad for Gussie (Agustus Fink-Nottle) when Bertie steps in to lend a able hand in his affairs..The premise of this ridiculously funny book is simple, Gussie has fallen in love with Madeline Basset, friend of Bertie's cousin Angela, who (Angela) has quarelled with her lover and Bertie's longtime friend (the episode at the Drones notwithstanding) Tuppy Glossop over the matter of the latter not acknowledging the former's tryst with a shark at Cannes. Simple enough right? Take all these people and confine them in a country house, add a liberal dashing of Aunt Dahlia and that man of intellect Jeeves, not to mention a few assorted cooks and uncles, and you have a tale of horror (for Bertie) or a tale of absolute joy for the rest of us. When helping convey Gussie's love to Madeline, Bertie convices Madeline that he loves her too. So when Madeline falls out with Gussie, she comes running to Bertie, who would rather she not. Tuppy, is also convinced that some low-lying snake has stolen Angela from him, and thinking that this l.l.s is Gussie. Gussie, meanwhile, to brace himself for the gruelling task of presenting the prizes in the Market Snodsbury school (for which he is down at Brinkley Court) tanks up on alchohol, and threatens to sully the Wooster name in a gathering of Market Snodsbury's finest. When the going gets tough, the tough ring for Jeeves. Can the man save the hour and untangle this absolute mess?This is one of Wodehouses's finest Jeeves books. I say that in a different way in every review of mine, but I cant help it. The man is so good! If you cannot read this book in its entirety (shame on you!) just read the description of Gussie presenting the prizes. That one chapter will brighten your day, suffuse you in a radiant light of good cheer and make you feel that life is one great glad song. Don't miss this book. It's an absolute ringer!

Published by Thriftbooks.com User , 19 years ago
Previous: Thank You, JeevesOne of the most popular of the Jeeves novels, Right Ho, Jeeves brings us to Brinkley Court, the lair of Bertie's Aunt Dahlia, who is by far my favorite secondary character in all the books. This book is overshadowed by a decidedly antagonistic relationship between Jeeves and Bertie over a certain white jacket with brass buttons, and one can practically see Jeeves snickering in the background when his brilliant solution to the problems at hand is accomplished at Bertie's expense. Nevertheless, he does "rally round" when needed, and saves Bertie from a fate more hideous than death, viz. marriage to the loony Madeline Bassett. There are moments of laugh-out-loud hilarity in this book, notably Gussie Fink-Nottle's prize-giving at the local grammar school after drinking a jug of spiked orange juice, Bertie's very ill-timed question about haggis (a personal favorite of mine-the line, not haggis), and Aunt Dahlia's calm suggestion that Bertie go out to the garden pool and drown himself. This is comedy at its brilliant best. A wonderful beginning to a chain of events and characters that will follow in many books to come.Next: The Code of the Woosters

Wodehouse at his best

Published by Thriftbooks.com User , 19 years ago
This is a favorite of all Jeeves and Wooster fans, and it features one of the most memorable scenes in the Wodehouse canon: Gussie Fink-Nottle's presentation of awards at a grammar school, after drinking a double-spiked orange juice. This is Wodehouse at his best - and that's saying plenty.

Published by Thriftbooks.com User , 21 years ago
A highly comic romp with the English gentry, you know, those fellows of Eton, living in Manors (and having impeccable ones,I am told), with little to do but receive social approval for whatever they do; all with the quietly dignified, prescient aid of their butler. Pleasant enough, but P.G. Wodehouse masterfully parodies the upper crust and their sometimes foolish pretenses as he skewers one Bertram "Bertie" Wooster ("A lesser man, caught in this awful snare, would no doubt have ceased to struggle; but the whole point about the Woosters is that they are not lesser men."); often through the verbal and psychological ingenuity of "Jeeves," the almost obedient servant who masters the master ("I fear, sir, that I was not entirely frank with regard to my suggestion of ringing the fire bell").Wodehouse (who belongs with those other two-initialed humorists of the era, A.J. Leibling, S.J. Perelman, and T.E. White) created icons and, perhaps, an entire genre through Bertie and Jeeves. The dialogue is, as they say, splendid: Droll and dry, understated yet preposterous. Perhaps nowhere else have the strictures of etiquette been exposed with such wit: "A touch of salmon?" "Thank you" "With a suspicion of salad?" "If you please." Wodehouse manages this satire through the first-person narrative of the object satirized-no mean feat, what? (You may find yourself uttering Wodehousian English phrases for a few days after reading this.) The plot is a bedroom farce without the bedroom, with lots of the usual twists and turns, but the ending is a little too neat. One reads Wodehouse, however, mostly for his delicious language, his assortment of odd, engaging (and oddly engaged) personalities, and, above all, his adroit sense of humor and timing. Right ho! Highly recommended.
Copyright © 2020 Thriftbooks.com Terms of Use | Privacy Policy | Do Not Sell My Personal Information | Accessibility Statement
ThriftBooks® and the ThriftBooks® logo are registered trademarks of Thrift Books Global, LLC