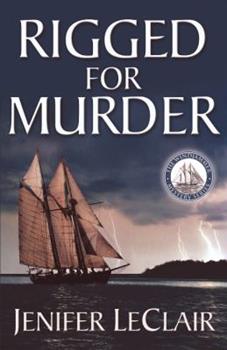 (Book #1 in the Windjammer Mystery Series)

On leave from the Minneapolis Police Department after being shot, homicide detective Brie Beaumont has gone to Maine where she has family roots. She ships out on the Maine Wind for an early season cruise with Captain John DuLac and eight others. Caught in a gale, they anchor off remote and windswept Granite Island. When someone aboard is murdered, Brie must single-handedly stage an investigation that moves from the ship to a small fishing village...

Published by Thriftbooks.com User , 12 years ago
Reviewed by Leslie Storey for RebeccasReads (8/09) "Rigged for Murder" is the first of a new series by Jenifer LeCair. They say you should write what you know, and the author has done that by incorporating sailing into her books. She has been an avid sailor since she was 17 and has been on many windjammer cruises since 1995. Detective Brie Beaumont has taken leave from her job with the Minneapolis Police Department from an incident that killed her partner and left her with PTSD. She decides to take a leave of absence and go back to her roots and what is familiar, sailing. Brie signs up for a windjammer cruise in the Northeast aboard the Maine Wind and while she tries to escape her past for awhile, a man is murdered on the cruise in the middle of a bad storm. True to form, Brie calls upon all of her skills as an investigator and looks into the murder and then the apparent suicide of another shipmate. Was it suicide or was he also killed? "Rigged for Murder" grabbed me after the first chapter. While the book is not heavy on sailing terms and techniques, there is enough information and imagery that paints a picture of the ship and how the crew must work together to run it. The character Brie is dealing with her own issues but is able to put them aside to look for clues, minus any CSI type assistance from the Coast Guard or local police - because there is none on the island! The author also incorporates a love interest for Brie with Captain John DuLac. There is a mutual interest and while the characters do not move too far forward to fast in this possible relationship, there is enough to keep the reader interested but not so much that it does not seem real. The author did a good job of hiding who the killer was because I did not figure it out until near the end when the killer was revealed. To me, that is a sign of a good writer, one that does not give away too many clues of who the killer is before you are half way through the book. I do wish there had been more sailing terms used, but too many would have left a novice wondering what everything meant and would have detracted from the actual story. I recommend this book for anyone that likes mysteries (cozy or otherwise) and have an interest in sailing, you'll find that this books is a great combination of the two.

Published by Thriftbooks.com User , 13 years ago
Still suffering from PTSD following the death of her police partner Phil and blaming herself, Minneapolis homicide detective Brie Beaumont takes a needed leave of absence. Brie recalls her favorite childhood activity was sailing with her dad in command of their vessel until he died from a heart attack at only forty-eight years old. Realizing being away from the job is not enough as Phil haunts her every step, she leaves town booking a sailing tour starting in Camden Harbor, Maine on the schooner Maine Wind captained by John DuLac. However, a storm forces the captain and crew to seek haven in Granite Island Harbor. At dinner, Pete McAllister flirts outrageously with Alyssa Lindstrom, whose husband Rob angrily threatens to kill the womanizer and his wife. At 3:15 AM, a screaming hysterical Alyssa wakes up everyone having discovered the murdered corpse of Pete. Detective Beaumont offers her investigative skills and DuLac accepts. Thus the cop and the captain try to uncover the identity of a killer although the jealous spouse is the prime suspect. Admiration of each other's talent turns into an attraction between Brie and John that is used to enhance an engaging New Englander whodunit. Readers will believe they are sailing on the schooner and waiting out the storm at Granite Harbor as Jenifer LeClair vividly captures the Maine background in the Windjammer mystery. With a strong support cast including the capable crew, the battling passengers, and the eccentric islanders to add depth, fans will enjoy RIGGED FOR MURDER. Harriet Klausner

Published by Thriftbooks.com User , 13 years ago
A sailor herself since she was 17 years old, St. Paul Minnesota author Jenifer LeClair has rigged her first novel in her Windjammer Series into a winning combination of psychological thriller, police procedural, and action adventure. It's a five-star launch for her aptly named sea-going series and hopefully a precursor for an armada of others to follow. At thirty-six, Brie Beaumont, as LeClair tells it, has got twelve years of service as a veteran detective with the Minneapolis Police Force. She's recovering from the trauma of a shooting in which her partner was killed and she's bearing the burden of guilt. Now with a leave of absence, she's returned to her childhood summertime solace at seaside Maine on a windjammer cruise to hopefully heal her psyche and wash away her burden. But it doesn't work that way when a murder occurs on board the windjammer "Maine Wind" where she's a passenger and she's forced into the detective's role she was hoping to escape. With only long distance police backup from Minneapolis but no direct access to the CSI technology available there, she now has to revert to her basic instincts and fundamental Sherlockian techniques to assess clues, question the eight passengers and crew on the jammer, analyze them and herself and conclude who had the means, motive and opportunity to impale the victim with the marlin spike found in his chest during an overnight storm. Within the close confines of the ship and a nearby island where they shelter from the storm, Brie believes, "At least the killer can't escape; nowhere to go." And so it seems as she interviews each of the passengers and crew, each with his or her stories to tell, sometimes forthrightly, sometimes tripped up by their own lies about voyeurism, homosexuality, womanizing, jealousy, or past lives, and sometimes caught in Brie's net as she toys with a piece of frayed rope, making and unmaking sailors' knots, trying to unravel the strands of her past or tie down her currently surging feelings for ship's captain John Dulac. It's a process in which she discovers that "finding the truth was somewhat like sifting through sand looking for salt." And while she seeks and sifts, the sea whips around the ship and the island retreat with moods as varied and unpredictable as the motives that wash over the novel's characters and sail them towards a surprisingly action-packed and riveting ending. Tightly written and intricately constructed, LeClair's "Rigged for Murder" is first-class storytelling in a setting so authentic you can hear the ocean's roar and taste the salt from the sea. -END- M. Wayne Cunningham

Published by Thriftbooks.com User , 13 years ago
Reviewed by Richard R. Blake for Reader Views (6/08) Homicide Detective Brie Beaumont has taken a leave of absence from the Minneapolis Police Department. Brie is working through unresolved issues and nightmares from post traumatic stress since the death of her partner Phil. "Rigged for Murder" is the first in The Windjammer Mystery Series written by Jenifer LeClair. Within the first chapter I found myself engaged vicariously as I experienced the gale force winds and storm-washed deck of the Maine Wind as Captain John DuLac "fought to turn the ship's rudder in the heavy seas." The captain and crew changed the course of the battered schooner and soon safely anchor in the harbor off the Coast of Granite Island, to wait out the storm's fury. Dinner aboard the Windjammer became a study in group dynamics as tensions built, passengers became edgy, and crew members voiced innuendos and insults at one another. Womanizer, Pete McAllister, bantered with flirtatious, Alyssa Lindstrom, until her husband, Rob Lindstrom exploded with jealously and threats. This storm created a new tension matching that of the storm still brewing outside the ship. As LeClair skillfully introduced her cast of characters, made up of the ship's crew and passengers, I found myself matching wits with Brie as I speculated, first on who would be the murder victim, and secondly who might be the most likely suspect. A scream in the early morning hours brought the ship to life as Alyssa Lindstrom discovered the body of a murder victim. A disabled radio made it impossible to contact the Coast Guard. Detective Beaumont and Captain DuLac took charge of an investigation and soon moved the body to Granite Island. Long time friends of DuLac operated a bed and breakfast inn on the island and soon the investigation was transferred to the library of the lodge. A thread of possible romance develops as Brie, smitten by John's good looks, admires his strength and calm as he conquered the winds and waves of the sea, as well as the way he faced the crisis of a murder during his cruise. John in turn was impressed with Brie's beauty, her mysterious demeanor and her expert way of examining evidence, interviewing suspects, and her strength of character. A strong plot, non-stop action, and first-class character development combine to make this an exciting, page-turning adventure novel. Adding to the tension, intrigue, and mystery is the meticulous care in researching the details and terminology of sailing, lobstering, and the Maine coastal islands and communities. I have added Jenifer LeClair to my list of "must read" authors and I am eagerly looking forward to the sequel to "Rigged for Murder," another story of high seas adventure, murder, intrigue, and romance.

Published by Thriftbooks.com User , 13 years ago
"A dirty sky boiled overhead as the Maine Wind beat a course through heavy seas toward Granite Island. Blasts of wind heeled the ship over, and banshees wailed up and down her rigging. Her old timbers groaned as if she were in labor, but she plowed on under deeply reefed sails." What a masterful mood setter. Jenifer LeClair kept me guessing with a finely-tuned plot filled with twists and turns. The author draws strong characters, capturing a cross section of humanity, from Captain DuLac, a man with many strengths but a weakness for Detective Brie Beaumont, to the pathetic and confused Alyssa. And what's not to like about colorful and quirky Fred Klemper, the general store owner on Granite Island. "Rigged for Murder" is fast-paced, and it draws you in. I couldn't put it down. (And for the critic from GA, on my sailboat I furl my jib sail but fold the mainsail over the boom.)
Copyright © 2022 Thriftbooks.com Terms of Use | Privacy Policy | Do Not Sell My Personal Information | Accessibility Statement
ThriftBooks® and the ThriftBooks® logo are registered trademarks of Thrift Books Global, LLC