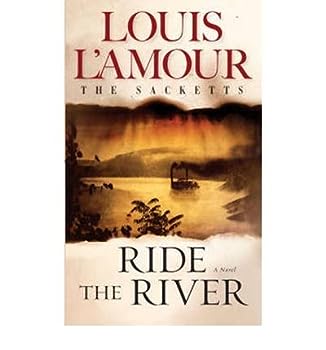 (Book #5 in the The Sacketts Box5 Series)

This description may be from another edition of this product. Alone in the big city, a fierce young frontierswoman must outsmart a dangerous con man before she can stake her claim to the family fortune. Sixteen-year-old Echo Sackett has never been far from her...

Published by Thriftbooks.com User , 16 years ago
Louis L'Amour writes like a girl, and when he's telling the story of 16-year-old Echo Sackett, that's an excellent thing to do. Echo leaves her mountain home in 1840 to claim an unexpected inheritance in the City of Philadelphia, and the story is principally about her efforts to outwit and outfight the criminals who want to make sure she doesn't get back to the mountains with what is rightfully hers. Echo, every inch the lady, has spunk and smarts enough to go with the knife she calls her "Arkansas Toothpick." Being a Sackett, she also has a lively sense of her family history. As in most L'Amour books, the Sackett ethos -- help your kin at any cost -- is on full display here. I also enjoyed the book because it includes a free black man and a gallant city boy, not to mention serious villains. Their adventures, and reactions to them, are true to the time and place of which they're part. It's also worth noting that the moral code that suffuses this book -- the idea that doing good deeds is like scattering bread on the water -- is L'Amour's version of what author Catherine Ryan Hyde would famously call "Pay it Forward" many years later. In short, on the river or off of it, Echo Sackett is good company, and not just another pretty face. She reminds me of a family friend who ignored the unspoken navy blue dress code to interview for an elementary school teaching job wearing a lime-green skirt and matching Eisenhower jacket. You'll enjoy this story even if you haven't had the good fortune of knowing a young woman of such character.

Published by Thriftbooks.com User , 18 years ago
Echo Sackett is one of the few women mentioned of the family. She is young, but she is a better shot than her brothers. Echo is also a strong female character who still aspires to be ladylike and not masculized. But she still knows to "expect Higginses" when she finds she is due an inheritance and travels alone to retrieve it. Fortunately, being a woman is an advantage in a world of men who will underestimate her abilities. I admire L'Amour for writing such a strong, young female character. Girls may become interested in reading westerns after their introduction to Echo Sackett.

Published by Thriftbooks.com User , 20 years ago
Another book in the great sackett series! Not only is this book great for the story of Echo SAckett and her traveling adventures, but it also provides a link between the books on the foundation of the Sackett family and their later exploits further west. A great read as are all of the sackett series,

A strong woman, but not a bull-headed one

Published by Thriftbooks.com User , 22 years ago
I loved this book because, first of all it was a Sackett book and second it was about one of the few mentioned Sackett women. Echo is young , but not too young to realize when someone is trying to pull the wool over her eyes. Dorian Chantry is just the type of man she needs, not too controlling, and Oh so cute. I loved it so much that I read it in about three hours one night then about five times since. It's one of my favorite L'amour books. Read it!!

This is a crowd-pleaser. Everyone loves this book!

Published by Thriftbooks.com User , 22 years ago
This is my favorite Louis L'amour. Yes, I am female, but all the guys I know that have read it enjoyed it as much as I. I keep my own copy on my shelf and have read it several times. It's got a little bit of everything. Shooting, fighting, out-witting, and even just a little bit of romance. You will not be disappointed with this one.
Copyright © 2020 Thriftbooks.com Terms of Use | Privacy Policy | Do Not Sell My Personal Information | Accessibility Statement
ThriftBooks® and the ThriftBooks® logo are registered trademarks of Thrift Books Global, LLC