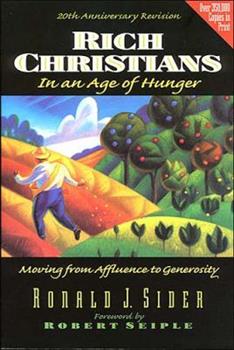 Rich Christians In An Age Of Hunger: Moving from Affluence to Generosity (20th Anniversary Revision)

In the 20th anniversary revision of his groundbreaking book Rich Christians In An Age of Hunger , Ronald Sider examines the complex causes of poverty and offers concrete, practical proposals for social and individual change. The most thorough, biblical case against poverty-20 years ago or today.

Published by Thriftbooks.com User , 17 years ago
It's about our salvation! I would say this is the basic message of Rich Christians in a Age of Hunger. Sider makes it loud and clear that these two facts are undeniable and inescapalbe. First, God is not passive about economic justice. Just read the 64 passages in The Bible about the liberation of the poor and oppressed and God's love of the poor and oppressed including Matthew 25:40. In addition, poverty and its horrible effects are wide spread in our world today.Up to now, most of us have been denying the challenges of poverty to avoid feelings of guilt. What we need to do today is remind everyone that economic justice is about compassion not guilt. We can practice our compassion by doing our best to be more generous everyday. In the business world, this is known as "continuous improvement." Some good companions to this book are Opting For The Poor by P.J. Henriot S.J, How Much Is Enough? by Arthur Simon, and Unexpected News by Robt. M. Brown. These great books inspired me to compile a social ministry manual which is online and free at www.slu.edu/departments/church/SocialMinistry.htm .

Having a Heart for the World

Published by Thriftbooks.com User , 19 years ago
After reading the reviews posted, all I can say is that this book proclaims real biblical truth. While I am not an economist, and cannot verify the soundness of the economic theory, the main message of the book is certainly true: there are lots and lots of desperately poor people around the world, and God loves them; and who God loves, we should love too. It is so hard living in the West, especially in a wealthy country like the USA, to have a global perspective that constantly keeps in mind and has compassion for the suffering of the poor in the third world. And considering how much Jesus talks about money and the dangers of being rich, it is valuable to read a book that challenges us to instead store up treasures in heaven. The central messages of this book are really uncontroversial in light of scripture: God loves the poor. We should give generously and effectively. We should love the poor. That's really what this book is saying. From Ron Sider's repeated disclaimers and prefaces to his specific economic suggestions, it doesn't seem Ron Sider is saying there is only one definite way that will truly help the poor. All he's saying is that we must help them. Do unto others.... Overall, I really enjoyed reading this book. The third section was pretty dry and difficult to get through (but with important facts and figures), but the the rest of the book is convicting and inspiring. This is a book that every Christian should read--and approach with an open heart and willingness to make lifestyle changes. Reading this book as a Christian in America is a lot like Jesus' confrontation with the rich young ruler; and after reading it, many people go away sad (or angry!). But imagine the joy in store for the person who really takes this biblical call to love the poor seriously...it's immeasurable.

The older edition is still worth reading

Published by Thriftbooks.com User , 20 years ago
This book has a become a classic, and rightfully so. More recent editions have been issued. The newer versions hold the same basic principles but with a few revisions, including up-to-date statistics, but the old one still has much value. Sider follows a three-part structure: The first part is aptly titled "Poor Lazarus and Rich Christians", and the title reveals its contents. Full statistics are given on the extent of global hunger, and the wealth of global Christianity, particularly in North America and Europe. The second part is an in-depth Biblical study on the importance of helping the poor and the wise use of possessions in Christian living. The third part offers some suggestions for living out these Biblical principles.Good: All three sections are solidly researched and every assertion is fully supported, from both a Biblical and a social/statistical perspective. The impacts of hunger are particularly hard-hitting. It's hard for me to imagine someone reading this book without being fully convinced of the following: 1) Hunger is a BIG problem; 2) Christians have the resources to stop it; 3) Caring for the poor is presented in the Bible as a paramount issue for Christian discipleship; and 4) We need to do more, and there are things we can do.Bad: This older edition kind of damages its credibility a bit in the introduction by giving a possible 1985 nuclear war scenario with hunger as the pivotal issue. Opinion: This book very bluntly presents the hard truth for Christians: we're not doing what God has called us to do, in terms of taking care of the needy. No Christian should pass this book by. The issues are overwhelmingly Biblical and too critical to ignore. At this point I'm embarrassed that I didn't read it sooner.

Published by Thriftbooks.com User , 21 years ago
Sider presents us with a problem as Christians. We are filthy rich while others are extremely poor. While some will call this book "liberal" and "socialist," the best word for it is orthodox. One of the best points Dr. Sider makes is that while we try desperately to be theologically orthodox (and he is), in our actions we are heretics. The book of Acts describes the system of the early Christians regarding money quite well. The were essentially communists, but most importantly they shared and didn't care for material possesions. The same is true of the early Christians, they would take literally Jesus' words "Sell everything you have and give to the poor..." Sider's facts are shocking as to how poor suffering souls are over the world. The basic premise of this book is to show the extreme poverty of most of the world, and then show the Bible's opinion on this. He is a prophet against materialism and I like his style. He supports capitalism as I do, but he believes we as Christians are just as materialistic as the non-Christians. It was Jesus himself who said "Its easier for a camel to go through the eye of a needle than a rich man to enter the kingdom of heaven." Finally a book that does not confuse Biblicism with conservative economics.

Getting to the heart of things

Published by Thriftbooks.com User , 21 years ago
Reading this book has helped me to see that this world does not revolve around me or the west. Mr. Sider goes through and gives pratical, challenging ways to implement loving the poor. This book has helped reshape the way I see and think about Jesus. It has helped to show me the Lord is not just concerned with the western world, but also for the majority of the world that does not live in the west. He came to set the prisoners free. This book challenges readers to do the same. I loved this book. It has the potential to change your life, if you let it.
Copyright © 2020 Thriftbooks.com Terms of Use | Privacy Policy | Do Not Sell My Personal Information | Accessibility Statement
ThriftBooks® and the ThriftBooks® logo are registered trademarks of Thrift Books Global, LLC