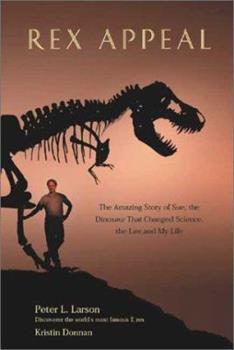 Rex Appeal: The Amazing Story of Sue, the Dinosaur That Changed Science, the Law, and My Life

by Kristin Donnan and Peter Larson

Unraveling the fascinating puzzle of who the Tyrannosaurus rexes were and how they lived, this book shares the amazing story of the uncovering and painstaking restoration of prehistory s most popular monster. Written by the most successful T. rex hunter in history, this guide tells how a crew without university grants or funding, even without PhDs, were able to buck the academic establishment and sometimes even the United States government and the...

All Rex no Sex

Published by Thriftbooks.com User , 17 years ago
"Rex Appeal" is the amazing story of one of the most significant fossil discoveries in the last fifty years. The story of "Sue" the fossil Tyrannosaurus Rex discovered by Peter Larson's associate Susan Hendrickson spins a web of intrigue from the moment the dinosaur's bones are discovered. With splashy headlines and national press coverage "Sue" becomes the darling of science, then the bane of Larson. The landowner from whom the fossil was "bought" cries foul. Maurice Williams who is one eighth Lakota Sioux had put his land in trust with the United States Government. When Williams realizes the fossil may be worth many multiples of the $5000 he was paid for its excavation, the United States Government gets involved and when that happens it makes an IRS audit look like a toddler's birthday party. The problem for Larson is that he is not strictly a scientist, but has established a for-profit organization called the Black Hills Institute. Not to say that Larson has nothing to contribute scientifically to the study of dinosaurs. His science is outstanding by current standards. But, the government suspects that Larson has nefarious intentions and pursues him with the fury of, well, of a pissed off T.Rex. "Sue" is seized by the FBI and the South Dakota National Guard and the ensuing legal battle is extremely one-sided, according to Larson of course. He is confronted with an over-zealous prosecutor and a biased judge. Without hearing the other side of the story it's impossible to pass judgement on the veracity of the case against Larson. But it is safe to say that the judge in the case certainly defied all logic when he declared "Sue" real estate. 65 million year old bones hardly qualify as real estate, especially if the landowner was paid a handsome sum for their retrieval. In the end Larson winds up in prison for nearly two years, his marriage to co-author Kristin Donnan dissolves, and his Institute is nearly bankrupt. Somehow Larson manages to emerge at the other end of the tunnel a changed man. He still pursues fossils with vigor after learning what many who have gone before him could have told him, "you can't fight City Hall". The only criticism of the book is the complete lack of any intimations about Larson's relationship with co-author and ex-wife Kristin Donnan. Donnan is a free-lance writer who covers the "Sue" story and eventually falls in love with, and marries Larson. There is nothing in the book about their affairs. Whether that is intentional or not it would have at least contributed something to the story and clarified some of the events. In all the book is highly recommended. Larson's theories about T.Rex and other issues related to dinosaurs are well thought out and informative. This book is a must for all us amateur paleontologists who can't get off our couches to go out west to do a little digging ourselves.

educational book on all fronts....

Published by Thriftbooks.com User , 18 years ago
I found reading Rex Appeal to be highly entertaining and informative book. I learned quite a bit about the people who dig dinosaurs and about the T-Rex itself. The author's legal problems smack with pure malice by the justice department. I wondered why such a thing was allowed to go as far as it did. Highly readable book, it revealed the world of paleontology and its rewards and risks. I wonder if Judge Battey can look in his mirror and see a honest man?

T-REX will always be the big boy on the block!

Published by Thriftbooks.com User , 19 years ago
This is not just another dinosaur book. It is not just another dinosaur book with some fascinating facts about T-rex. This is THE book about T-rex by one of the foremost authorities on this bad boy of the Cretaceous. Peter Larson's intimate knowledge of this beast comes from excruciatingly hard-earned experience. While it is a recounting of the nightmare saga surrounding the Sue specimen, it is also a manifest of the current thinking regarding T-rex, its lifestyle, and place in prehistory. Despite his own grievous experiences with the legal system, there is no self-pity in Mr. Larson's book. He simply states the facts as he knows them to be, as any researcher worth his salt should.An A+ all the way.

Published by Thriftbooks.com User , 19 years ago
I concur completely with the eloquent words of Niles Eldredge, distinguished invertebrate paleontologist at the American Museum of Natural History - and with his late friend Stephen Jay Gould, created the theory of punctuated equilibria - who notes that not only is this book a riveting saga, but also, "...a gripping account of a horrific episode in American paleontology that should never be allowed to happen again." This is simply one of the finest books on field paleontology that I've come across, told through the graceful - and at times - eloquent prose of Kristin Donnan, Pete Larson's ex-wife. Indeed, her splendid writing is occasionally as mesmerizing as Frank McCourt's lyrical prose in "Angela's Ashes", describing the legal affairs of Peter Larson and his firm, Black Hills Institue of Geological Research; legal affairs that seem as dismal as the tragic childhood which Frank endured. Pete does an elegant job surveying what is known about Tyrannosaurus rex and its nearest relatives, drawing in part on his own ground-breaking research, which includes determining dinosaur sex. He also successfully conveys what is - and isn't romantic - about life as a field paleontologist. Yet the reader may find more compelling his descriptions of academic political fighting in vertebrate paleontology and the unjust seizure of "Sue" by the FBI which ultimately led to a U. S. government-orchestrated show trial against Pete and his colleagues at Black Hills Institute. I was fortunate to meet Pete, his brother Neal and their Black Hills Institute colleagues years ago during the annual Tucson Gem and Mineral Show when I was a brash graduate student of paleontology, highly skeptical of his motives. I was soon won over by Pete's sincerity and devotion to paleontology. Both his sincerity and love of paleontology are demonstrated repeatedly throughout this terse, yet still riveting, tome. It's a pity that no major publisher is promoting "Rex Appeal". It's truly a splendid book worthy of such promotion. In light of the trials and tribulations which Pete, his family, friends and colleagues endured over "Sue's" legal battles, it seems appropriate to refer to this book as a paleontological "Angela's Ashes".

The "crime" of committing business

Published by Thriftbooks.com User , 19 years ago
I was there. I live 20 miles from the world's foremost paleontological business. I saw Sue's skull before the government stole it from the Black Hills Institute of Geological Research. I cried when the acting U.S. Attorney (on whose law degree the ink had not yet dried) sent the Army (didn't think they could do that, did you?) to raid a group of entrepreneurs whose offense was "committing business".I cried again when I read "Rex Appeal". "Rex Appeal" is, in a way, an allegory for the events which spawned it. It's an exciting adventure, spanning tens of thousands of centuries of natural selection unspoiled by federally-supported academics and their lapdog federal agencies wielding arbitrary power (or is it the other way around?). It's also an illuminating look into the "legal" processes which, daily, throttle creativity and choke the life out of progress and the attempt to gain knowledge about the great mysteries.A phenomenal scientific find is made; the finders try to share it with anyone interested. Instead of celebrating, the academic scientific community binds with lawyers to punish the finders. U.S. Attorneys can't find laws which cover the activity, so they apply laws which don't. A federal judge makes up law out of thin air -- "Bones are real estate." A jury revolts after finding it was bamboozled by the lawyers and judge.And all along, paleontologist Peter Larson (who spent two years in a federal prison for . . ., well, nothing) draws us into his world of childlike curiosity, the sort of curiosity without which absolutely nothing would be known about anything. Kristin Donnan's writing skills whirl around Larson's narrative like knitting needles, weaving the yarn into a fascinating story of science, law and, ultimately, a denouement of both triumph and defeat (but mostly triumph).Caution: a reader will be unable to 1) put "Rex Appeal" down, 2) avoid gaining tons of knowledge about dinosaurs in general and the "terrible king of lizards" in particular, or 3) maintain respect for a legal system which can and does whimsically make criminals out of peaceful honest people who actually produce something of value.Icing (on a cake which is already delicious without it) is Donnan's use of punctuating quotes from Lewis Carroll's "Alice in Wonderland" (which gave me some insight as to what "Alice" is really about). Sample: "I don't think they play at all fairly. They all quarrel so dreadfully one can't hear oneself speak -- and they don't seem to have any rules in particular."Don't bother to think about it any more. Buy this book today. It's only a shame that I can give it no more than five stars.
Copyright © 2022 Thriftbooks.com Terms of Use | Privacy Policy | Do Not Sell My Personal Information | Accessibility Statement
ThriftBooks® and the ThriftBooks® logo are registered trademarks of Thrift Books Global, LLC