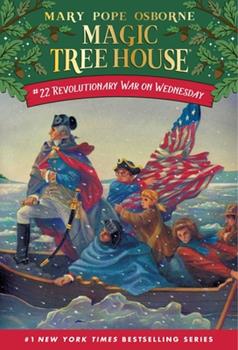 The #1 bestselling chapter book series of all time celebrates 25 years with new covers and a new, easy-to-use numbering system! It is a dark and snowy night when the Magic Tree House whisks Jack and Annie back to colonial times. General George Washington is about to lead his army in a sneak attack against their enemy. But now a terrible weather is making the great general question his plans. Can Jack and Annie keep history on track? The fate of the...

Great Book! Ignore the Bad Reviews if you just want your kids to enjoy reading and be read to!!!!

Published by Thriftbooks.com User , 16 years ago
COME ON PEOPLE! First of all this book and the entire series is meant for KIDS NOT ADULTS so go with the flow. Imagine you are a boy or girl who is 5 or 6 and is just starting to enjoy stories and reading. You will love it! The whole point of a book is to have children begging for more. This book and the series does just that! ENOUGH SAID! My 5 yr old loves this book and as a result he has become interested in American History. This appetite he has led us to purchase many more books on history. In my opinion, the book has accomplished what I wanted. AN INTEREST IN LEARNING! AN INTEREST IN HISTORY! AND AN INTEREST IN READING! The text should be simple! The text should be silly at times! Thank you to Mary Pope Osborne for creating a wonderful series which I believe has turned my child into a history buff eager to learn everything about America!

Don't Miss This Review of Revolutionary War on Wednesday!

Review of Revolutionary War on Wednesday

Published by Thriftbooks.com User , 21 years ago
This book was interesting because it told about the Revolutionary War. I learned that George Washington was nice to Jack and Annie who were good characters in the book. I highly recommend this book.

A Series Your Child will Enjoy Reading

Published by Thriftbooks.com User , 22 years ago
The Magic Tree House series got my third Grader son reading. My son couldn't wait to read this one and enjoyed it as much as the others! Number 22 in the series, this installment is true to Jack and Annie's adventures. The book is 2nd in their quest to Save Camelot. Jack and Annie go back to the Revolutionary War period. They learn about America's fight for independence and a lesson about perseverance. I like the way it presents factual events and history to the young reader. The book also gives facts about the Revolutionary War that teachers and parents can build on. Mary Pope Osborne does a wonderful job in writing a series that children anxiously await the next installment!

This is a really COOL book!

Published by Thriftbooks.com User , 22 years ago
This book is about a boy and girl named Jack & Annie who travel back in time in a Magic Treehouse. This adventure is about George Washington and the Revolutionary War. George was a Captain during the war, and is well-known for crossing the Delaware River. The Revolutionary War is what began the Right of Independence for the Americans. If you like to read or want to know about United States History, this would be a great book for you!
Trustpilot
Copyright © 2022 Thriftbooks.com Terms of Use | Privacy Policy | Do Not Sell or Share My Personal Information | Accessibility Statement
ThriftBooks® and the ThriftBooks® logo are registered trademarks of Thrift Books Global, LLC