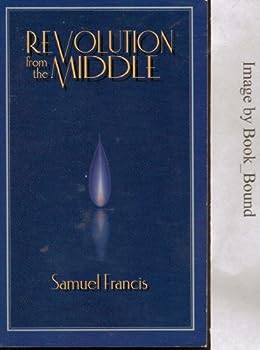 Revolution from the Middle

Book by Francis, Samuel T., Woodruff, Jerry This description may be from another edition of this product.

A Conservative Counterrevolution Countering the Hegemon?

Published by Thriftbooks.com User , 18 years ago
~Revolution from the Middle~ is essentially an anthology of op-ed articles compiled by conservative journalist Samuel Francis from Chronicles Magazine. Francis is perceptive even if it misses the mark. He makes the contention that Middle America must become self-conscious or be crushed in a gigantic pincer movement by the Left Coasters, the Neoconservatives in orbit around the Beltway and the Limousine Liberals of the Northeastern Establishment. Internationalism coupled with runaway immigration from the Third World, cosmopolitan urbanization, decadent entertainment, vanity and crass materialism are the seeds of discontent sowed by the elites. If the crisis goes unabated, Middle America will be assimilated into a cultural and spiritual void. Francis hopes to thwart the dawning of America as a new Tower of Babel seething in a moat of cosmopolitan decadence and one-worldism. The book is thought-provoking and should not be ignored by conservatives. Samuel Francis breaks with conservative luminaries like Russell Kirk and Erik Von Kuehnelt-Leddihin who for principled reasons rightly refuse to conflate conservatism to being an ideology or deem ideology as desirable. Samuel Francis on the other hand reasons that there is little left to conserve. For this reason, conervatives need to take a cue from communist theoretician Gramsci and adopt an insurgent ideology, albeit one of a restorationist, traditionalist and counterrevolutionary nature. This conservative counterinsurgency should strive to displace the hegemonic ideology of the transnational elites. Cognizance of the modus operandi of the Left, apparently has led Samuel Francis to believe that we must emulate their tactics to effectively fight and win a culture and political war. Gramsci, of course, proposed "a long march through the institutions," which would lead to the creation of a veritable state within a state. The Leftist ideology would topple the "bourgeoisie superstructure" from within, graft itself onto the existing state and gradually throw residual elements of the old order off. It seems, however, that the cultural overlords have already accomplished their Fabian goal of gradual change when conservatives break from traditional conservatism to become in Francis words Middle American Radicals (MARS). I reckon traditional Old Right conservatives can find fault with him for conflating conservatism to some kind of ideology. Neoconservatism is after all an ideology, and not representative of an authentic American conservatism, but rather retooled New Deal liberalism designed to pacify America's nominally conservative elements as a ersatz opposition to the alternative of modern statist liberalism. Nonetheless, Francis' pessimism is not tainted with the resignation that so many other avowed conservatives have. Francis obvious thinks Middle America shouldn't go out with just a mere whimper, but fight to the end. In analyzing some of the finer points of Francis' conservative counterrevolutio

RFTM must rdg for principled conservatives of all stripes

Published by Thriftbooks.com User , 23 years ago
Dr. Francis has a writing style and a subtle wit that I believe is second to none. He illustrates well poitical phenomenoms that very few writers see or dare to touch. Even though RFTM is a collection of his essays in another publication from 1989-96, the sundry subject matters fit together very well in near-booklike fashion. Dr. Francis does contradict himself from time to time (to his credit, far less than most conservatives, neo, ultra, or paleo), and he seems to posess a fundamental Washingtonesque snobbiness on infrequent occasion, and those are the only reasons I would give that I did not give it a perfect ten. Otherwise, get it, committ it to memory, and avoid lending it out as you may never get it back.
Copyright © 2022 Thriftbooks.com Terms of Use | Privacy Policy | Do Not Sell My Personal Information | Accessibility Statement
ThriftBooks® and the ThriftBooks® logo are registered trademarks of Thrift Books Global, LLC