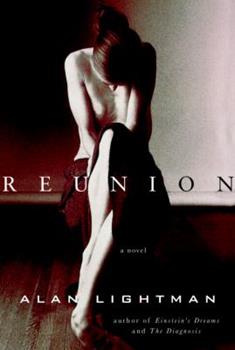 TheNew York Timeshas called Alan Lightman "highly original and imaginative." Each of his novels is a new exploration of that imagination, utterly unlike the others.Einstein's Dreams, an international best-seller, was a whimsical and provocative tone poem about time.The Diagnosis, hailed by the Washington Post as a "major accomplishment" and a finalist for the National Book Award, was a disturbing examination of our obsession with speed, information,...

The Road Not Taken.

Published by Thriftbooks.com User , 15 years ago
Alan Lightman's fourth novel, "Reunion", is a nostalgic journey through memories of faded youth. Charles reluctantly attends his school reunion. Now aged fifty-two, he feels confident with his financially comfortable life, despite his carefully ignored emotional emptiness. The reunion is not merely a meeting of aging ex-students, with all their petty competitiveness and subtle dislike of each other, but of Charles with his own recollections of ballerina Juliana, whose driving ambition allowed little room for anything outside of dance classes, a trait characteristic of all dancers. Reliving his memories of the girl he'd loved passionately, Charles is not only forced to admit to himself that his familiar version of events has veered from the original, but also that the loss of Juliana has shadowed his adulthood. With "Reunion", we are given a middle-aged man's grief for lost youth, for lost love, and also for the loss of any real thirst for life. Sensitive, introspective and melancholy, "Reunion" weaves a thoughtful consideration of the road not taken.

Published by Thriftbooks.com User , 17 years ago
Is it possible for a person to love without wanting love back? Is anything so pure? Or is love, by its nature, a reciprocity, like oceans and clouds, an evaporating of seawater and a replenishing by rain? ~Alan Lightman Einstein's Dreams is a delicate taste of the banquet of intimacy in Reunion. I am never sure if Alan Lightman's books are novels or the deepest expressions of his romantic nature. After reading Einstein's Dreams I knew there was more to discover and here it is in all its intimate beauty. The first few pages left me in a high state of amusement. How I understand that love of words as he wishes to be reading a book while lost in the world of a woman. Yet, what would the world be without romantic seduction and the seduction of words? In Reunion, the two dance together, intertwined in poetry and longing. Detailed accounts of action and reaction fill the pages as Alan Lightman's mind breathes every nuance of life, every consideration. Amidst the contemplations, humor mingles with memories and astute observations. I kept thinking: "I feel all my life past was a beautiful prison from which I unwillingly escaped." Alan Lightman revels in the sense of adventure he creates through imaginative descriptions of all that occurred or could have occurred. Are memories how we imagine life could have been or how life actually occurred? Does it matter? Alan's recollections are worth reading twice. He creates ambience and nostalgia in one sentence. Nostalgia for rain drenched sidewalks I have never walked on and musty libraries I wish to visit or return to hours later in memory. His powers of observation flow into a complete unveiling of appearances and private passions. Reunion is an escape into a world of imaginative observation. Even Alan Lightman's recollections of college and college roommates become an introduction to his main character's inclinations. We follow hearts through secret pains and pleasures. As Charles, a middle-aged professor, decides to attend his thirtieth college reunion, he remembers his senior year. He wanders with his twenty-two-year-old self in 1960 and the entire book become a journey to a past he so desperately wants to relive in memory. I am so in love with the writing in this book, I hardly mind that a person named Charles wanders in the pages and is in love with a beautiful dancer. I want to know more about how Alan Lightman views the world. His characters seem to me a backdrop for his heart's revelations. This is an obsession with love and life itself and I love the way the writing style changes and keeps your full attention. At times you are reading a novel, at times a memory and at times you have become so seduced by sentence structure, you are lost in a world of words and you are in love. ~The Rebecca Review

Published by Thriftbooks.com User , 18 years ago
I've read all of Lightman's previous novels but, except for Einstein's Dreams, I haven't been too impressed. I was tempted to skip this one. I'm glad I didn't.Reunion is the story of a college professor/poet named Charles who goes back to his thirtieth college reunion. While there, he experiences a vivid flashback to his senior year in college when he was in love with a ballerina named Juliana. Through the flashback we get to experience this brief, fiery affair from beginning to end. It is a wonderful experience.It is not a wonderful experience in the way one might expect, however. Really, it is a rather ordinary love affair of a 22-year-old complete with the intense range of emotions from passion and doubt to jealously and joy. And it is in its ordinariness that this novel is so special. Because, excepting the end where a few surprises muddle the works, its ordinariness allows Lightman an extraordinary truthfulness.Charles is perhaps a more real character than any I've read. I felt I understood this man--his reactions to his current lover, his former classmates, his memories. I felt that he was having the same kind of emotional experiences that I have had. And though Charles' story is his own, his emotions are universal. This is a very difficult effect to produce and Lightman does it brilliantly here.Of course, this is a brief novel but, in this case, perhaps that is best. The quick read helps convey the intensity of the experience, particularly the flashbacks. And though the protagonist is a man, I think the universality of the emotions will speak to any reader. I highly recommend this book.

Yet another unique, elegant novel for Lightman

Published by Thriftbooks.com User , 18 years ago
"Is it possible for a person to love without wanting love back? Is anything so pure? Or is love, by its nature, a reciprocity, like oceans and clouds, an evaporating of seawater and a replenishing by rain?" - from "Reunion," by Alan LightmanEvery few years, I get a little gift: a new novel from Alan Lightman. He doesn't publish fiction often, but when he does it is invariably worth reading. Best of all, each book is different from the others, while all are good.Lightman's style is one of elegant language and a unique perspective. In each of his books, I find enjoyment simply in the words he uses, and how they flow together to form his narrative. In this, "Reunion" is no different -- Lightman's use of language is beautiful in and of itself.In terms of the story itself, "Reunion" is about a man in his fifties who attends his 30th college graduation class reunion. In his own words, he lives a "comfortable" life -- he's divorced, with one child, and basically unremarkable, but "comfortable" nonetheless. At his reunion, he sees some people he remembers from college and meets a few new people. However, the real "reunion" of the story is when the main character (Charles) confronts his memories of the intense love affair he shared with a ballet dancer in his last year of school.To be honest, this is a story that most of us have read before. It is Lightman's perspective on the story, and his keen sense of observation, which elevate "Reunion" above the trite and pithy messages of other, similar, stories. Lightman offers ideas and viewpoints which are rare in modern fiction -- perhaps even unique to this novel. As such, "Reunion" is a rare and valuable book.Particularly memorable about "Reunion" is the way Lightman conveys Charles experiencing his memories. In several instances, he sees and hears what happened in different ways -- the idealized version that is what he thought would happen at the time, and the more human version which is probably closer to what really happened. The reader is left to question whether either "version" of Charles' memories is what really happened, or if true events were some unknown mixture of both versions. The subjectivity of memory is one of the major topics of the novel."Reunion" is a story about love, to be sure... and a touchingly bittersweet one at that. However, it is also about the changes and compromises that come with age, about the natural fallacy that personal perspective brings to events, and about the fragility of our memories. While it may not be my favorite of Lightman's books (that label still belongs to "Einstein's Dreams"), it is ceratinly an example of why I always look forward to a new Alan Lightman novel.

Published by Thriftbooks.com User , 19 years ago
The Reunion might be thought of as an elaboration of the climactic chapter of Good Benito, in which the irrationality of human existence is manifested as a woman obsessed with artistic expression, and with whom the hero is in turn obsessed, with tragic results.The choice of narrating most of the book as nostalgic revery from decades into the future risks making the hero's loss pathetic. Yet it also adds the half-expectation of a true reunion that never arrives, besides also allowing the contrast of the foolhardy passion of a youthful Charles, as a budding poet as helplessly compelled to pursue Juliana as she is compelled to dance, with the staid boredom of the middle-aged Charles, the tenured literature professor with anything but passion for his perfectly stable and "not unattractive" romantic partner.His unenviable end state is reflected in a dreadful former classmate, who has built a tremendously successful shoe business, but only by transforming himself from fully human to a mere shoe salesman. The unflattering suggestion is that Charles has strayed so far from the inspiration that led him into his career, his selling of poetry and literature classes has become nothing more than an equivalent of selling shoes. Something inside him recoiled from the harsh results of living life with the passion of poetry, but that withdrawal turned his capacity for feeling into a husk.Indeed, the complement to Good Benito might be extended. Whereas that earlier book explored the failures of life as a physics professor, Lightman's earlier profession, Reunion explores the failures of life as a literature professor, Lightman's current position, including a scathing portrayal of petty careerism involving Charles's antiheroic literary mentor and another protege. Perhaps, like Stephen King, Lightman feels driven to cast his fears into fables as a means of exorcising them.Like all Lightman, the style is somehow both subtle and operatic. He poses this specter: that which makes us human has little if anything to do with what makes life easier or more socially acceptable. Yet the hero is as apparently helpless to choosing a course among fates here as in The Diagnosis.What is left is the inevitability of loss. And Charles's loss, though stale with the passage of thirty years, is as poignant and palpable as his brief relationship with Juliana was torrentially glorious. There is the ring of truth in this exploration of yearning, joy, and regret.
Trustpilot
Copyright © 2022 Thriftbooks.com Terms of Use | Privacy Policy | Do Not Sell or Share My Personal Information | Accessibility Statement
ThriftBooks® and the ThriftBooks® logo are registered trademarks of Thrift Books Global, LLC