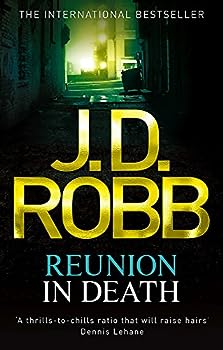 This description may be from another edition of this product. A birthday bash sets the scene for a frightening reunion with a killer from Eve Dallas's past in this novel in the #1 New York Times bestselling In Death series. At exactly 7:30 p.m., Walter Pettibone...

Definitely on the Top of My In Death Favorite List

Published by Thriftbooks.com User , 16 years ago
It is so hard not to have ALL of the books at the top of the "favorite" list since each story is just as good, if not better, than the last. "Reunion" brings back a case Eve had closed more than 10 years ago, however, the system failed and allowed this cold killer, Julianna Dunne, to be released from prison. Julianna attacks her victims with cyanide and is a champ at disguise. She is cold and callus and out to get her revenge on Eve (for being the cop who locked her up the first time) in the worst possible way - by killing Roarke. The story is written very well (the scene in Dallas in heart wrenching) and I particularly enjoyed the comic relief with Eve putting up a big fight about medical care and an even bigger one when Roarke infringes on her territory at Cop Central. That situation was very well played out (I had read some negative reviews on the way Nora handled this, however, I do believe Roarke saw the error of his ways and more than made up for it by the end of the story). This book also celebrates Eve and Roarke's first wedding anniversary in a way that brought tears to my eyes. Any story that can touch you that deeply, is definitely well written. Also, I couldn't conclude my review without acknowledging the supporting characters as well. They always add to the excitement, suspense and romance and the series would be nothing without them.

She Does It Again!!!

Published by Thriftbooks.com User , 19 years ago
I am truly amazed by Nora Roberts writing. How does she crank out so many books, all with the quality and zest that each and every one seems to have.This book is the latest in her In Death series written under the name of J.D. Robb.This time, Eve Dallas faces serial killer Julianna Dunne, whose recent release from prison has not seemed to help. She is out for payback against the one person in the world she respects, Eve. And the payback involves the murderous Julianna playing hardball on Eve's New York City area and she even stalks Roarke. Eve's vulnerabilities are seem to show, to Roarke and the reader. Julianna Dunne is a brilliant adversary, and she has done her homework well. This installment does seem to drag very slow in the beginning but sure picks up pace. All the characters seem to build and I do enjoy that part and getting to know the crew better. This was not the best In Death book but it was sure worth the read. If you enjoy this series then you do not want to miss it. If you are new to the series then start at the very beginning with Naked in Death and you sure will be delighted!

Published by Thriftbooks.com User , 19 years ago
As a devoted fan of this series I wasn't disappointed with "Reunion". The personal growth of Eve in this particular book was actually painful at times to read. I hope that now that Eve has confronted her demon, future books in this series won't have to keep rehashing her past in such depth. Always satisfying is the "marriage" between Eve and Rourke. Ms. Roberts is often at her best when she touches on the vulnerabilities of her characters. For readers who enjoy this series and want a recommendation: Dennis Lehane's series starting with "A Drink Before the War" is excellent. (I read somewhere that he was one of Nora Robert's favorites.)

Published by Thriftbooks.com User , 19 years ago
Got this book the other day and read it over night. Couldn't put it down. Robb has another winner. Each Eve Dallas story keeps getting better. In this one an opponent from the past challenges Eve by trying to kill Roarke and Eve meets the challenge. Eve faces her past in this book by going back to the city were she killed her father. We also meet Peabody's parents and they make the story interesting.

Published by Thriftbooks.com User , 19 years ago
I loved this book! It totally fit into the series and focused on some issues that we all wanted answered for a while. It didn't totally give anything away and all the close calls made the ending totally sweet! Eve and Roarke make such a great couple, it's too bad that I'm going to have to wait another 6 months for the next book to come out. Peabody and her family are a hoot and a half. I loved how this book started playing on Eve's little insecurities and it showed how everyone has developed in the year that Eve's been married to Roarke! Great read and can't wait for Purity in Death! =)
Copyright © 2020 Thriftbooks.com Terms of Use | Privacy Policy | Do Not Sell My Personal Information | Accessibility Statement
ThriftBooks® and the ThriftBooks® logo are registered trademarks of Thrift Books Global, LLC