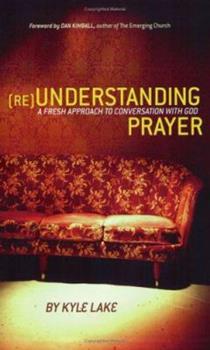 (RE)Understanding Prayer: A Fresh Approach to Conversation With God

What If, After Countless Hours Within the Walls of Church, you woke up one day feeling completely brain-dead about prayer? What's the purpose? How does it work? Why even do it? A few years ago, Kyle Lake-a pastor-found himself in this very predicament. So he set out to "reunderstand" prayer. Here, Lake deconstructs the wrong ideas of prayer that handicap our conversations with God and seeks answers to a few of faith's most pressing questions like:...

Published by Thriftbooks.com User , 13 years ago
The essential, five-star, lesson to be learned from this otherwise dangerous book appears in its title: Kyle Lake's "RE"-understanding of prayer cost him his life. Jesus is a loving God, a merciful God; but He is is NOT someone you want to get "Fresh" with in a conversation. Here's what actually happened to Kyle Lake as soon as his book was published. On Halloween Sunday (31 October 2005), at the University Baptist Church in Waco, Texas, Pastor Lake led his congregation in liturgical prayer, saying, "Surprise me, O God! Amen!" With hands raised in prayer, the congregation of 800 said aloud, in unison: "Surprise me, O God! Amen!" When the prayer was over, Pastor Lake, 33, descended into the sanctuary's chest-deep baptismal pool, to immerse some fifteen smiling converts in the name of the Father, the Son, and the holy Ghost. He gave a gentle tug on the microphone cord. Oops, what a big surprise, O God! Kyle Lake's faith in Jesus was well grounded that day, but the microphone was not. The poor man lit up like a child's sparkler on the Fourth of July, or like St. Elmo's Fire on a sailboat mast in a thunderstorm on the high seas, or like a mosquito on a Bug Zapper®. The congregation of 800, all ages, were nearly as shocked as the minister himself ¬- and what a long, drawn-out shock it was, because the Lord mischievously kept the circuit breaker from tripping. Pastor Lake might have known. It was only a few years earlier, in neighbouring Louisiana, that Jesus played the same olde fry-ye-preacher jest on the Rev. John Allen of the Victory Life Church, in Larose. Pastor Allen did not pray, "Surprise me, O God," but he did venture to baptise fifteen converts on the same day. During the thirteenth baptism, having grown tired of the show, Jesus electrocuted Pastor Allen with his own microphone. Kyle Lake was not a bad guy, nor even a bad Christian. But what was the man thinking? "Surprise me, O God," is exactly the kind of prayer that the Lord loves to answer with an ironic twist, especially on such traditional holy days as Halloween. Pastor Lake might just as well have asked his congregation to pray: "Trick or treat, O Lord!" I'm no minister of the gospel - truly, I may have missed my calling, in that respect - but I have studied the Holy Bible well enough to know that you should never, ever, let slip with an audacious prayer such as "Surprise me, O God!" unless you're wearing full body armor and have no dependent children. But how's this for a surprise? on the very same Halloween that Jesus fried Pastor Lake of Waco, he also whacked Pastor Frye, in a lake! Halfway around the world, the pastor of the Jerusalem Apostolic Church in Johannesburg, South Africa, was conducting a sunrise baptism, when the rock on which he was standing started to give way. Rev. Frye prayed, "Whoops! Don't surprise me like that, O Lord!" - but the Lord surprised him anyway, sucking Pastor Frye into a deep pool enclosed by a steep ravine. The minis

Very good book for what it is...

Published by Thriftbooks.com User , 15 years ago
I picked up this book with some inkling of what I'd find inside. DO NOT, I repeat, please do not buy this book if you are looking for a new formula for getting what you want out of God. You will be disappointed. Like so many of the 'Emergent' authors, Kyle Lake instead focuses on the essence rather than the mechanics of prayer (although he does devote a short section to what he describes as 'nuts and bolts'). By essence, I mean a book that tries first to deconstruct what prayer is not, and then reassemble it using examples and ideas from Judaic literature, Eastern thought, Jesus' prayers, and everyday experience. What I appreciated most about this book was its clear expose' of the self-centered, indulgent, if I push God's buttons this way I-will-get-what-I-want/need kind of prayer. Those buttons can be: 1. Waking up at 4:00 AM because that's when really spiritual people wake up to pray. 2. Praying for X amount of hours 'cause God really likes that. 3. Letting my cultural idioms dominate the communication in an effort to be 'real' ect... When you are really honest about these activities, aren't they (for the most part) an effort to covnince God (or yourself) that you are really serious/spiritual about prayer and that He SHOULD respond to this amount of piety? Kyle speaks about this and other subjects such as: Unanswered prayer, What is prayer, public vs private prayer... Some of the sections of the books really annoyed me, though. I realize that this could my personal taste, but there were probably 15 pages worth of email exchanges between him and some of his students scattered within the book. I really didn't find these very helpful and they became tedious to read. Also (and I hope that his makes sense), the book should have been twice as long, or twice as short. There were things in the book that I thought were very inciteful, and I would have loved for him to expand upon them. However, there were entire sections (like the emails) that I though the book would have been better without. Finally, I have to say that overall this was a very good book, and I would especially recommend it to those who don't pray at all...it will help you find a starting place. PS If you like Brennan Manning and Dallas Willard, they get their fair share of quotes within this book.

An Emergent Pastor Struggles with Prayer

Published by Thriftbooks.com User , 16 years ago
I am not a fan of the emergent movement to say the lease. In fact I would argue that I am opposed to it. Having said that, let me be the first to say that I did enjoy Kyle Lake's book on prayer. While I don't think this book will by no means be a classic on prayer, I do think Lake does what he set out to do and that is get the believer thinking about what prayer truly is. In this short work, Lake first takes us through his own struggles of prayer over the years. Is prayer simply a discipline? Is prayer merely selfishness? Is prayer to be on a charismatic level? What is prayer? While I am dissappointed that Lake doesn't take us through a study of Scripture to find his answer, he does take us to his own experience and how he know enjoys prayer by seeing it as a conversation with His Father. That is what Jesus had in mind in Matthew 6:9 when He taught His disciples to pray by starting out, "Our Father." Relationship before rules! Overall the book is good to read. While Lake is an emergent pastor and you get that feel in the book, the book is not heretical. Unlike some emergent books I've read, Lake doesn't just chop up the Church but he truly wants to see Christians enjoying prayer. While I would appreciate more exegesis of prayer texts, the book is a refreshing read on prayer.
Trustpilot
Copyright © 2022 Thriftbooks.com Terms of Use | Privacy Policy | Do Not Sell My Personal Information | Accessibility Statement
ThriftBooks® and the ThriftBooks® logo are registered trademarks of Thrift Books Global, LLC