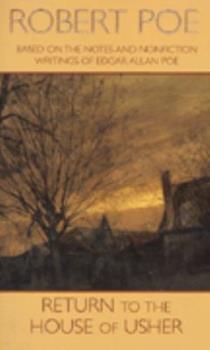 Return to the House of Usher

John Charles Poe, a small-town reporter in Crowley, Virginia, drinks a lot of bourbon and works because he doesn't have to. The heir to the family fortune, he has just received the most unusual part of the Poe legacy-the casket. The three-foot-long wooden box contains the notes and personal papers of the Poe men dating back to the eerie and mysterious Edgar Allen. It is passed on to every male Poe on his thirtieth birthday. John Charles has sworn...

Published by Thriftbooks.com User , 15 years ago
It is almost impossible to write a decent sequel to a Poe short story or poem. I was skeptical until I began reading this novel. Robert Poe did his famous ancestor proud.

Published by Thriftbooks.com User , 21 years ago
This book had me captivated from page 1. The author did more than just "update" Poe's original tale--he made it his own. Although you may have an inkling half-way through of the final conclusion, if you are reading it during a big windstorm at night, you don't really notice. I would recommend this book for any Poe lover & I look forward to reading other books of Robert Poe.

Published by Thriftbooks.com User , 26 years ago
---- RETURN TO THE HOUSE OF USHER Robert Poe Forge, Oct 1996, $22.95, 288 pp. For over a century and a half, just south of Richmond, the ruins of the House of Usher laid. Everything change when Dr. Roderick Usher and his sister, psychiatrist Dr. Madeline Usher open up a sanitorium at the very location where his ancestors faced a colossal collapse. However, strange phenomena occur and Roderick calls his fellow Virginia University alumni John Poe, a nearby reporter, to investigate the goings on. John, who has not seen or heard from Roderick in five years, travels the seven miles to the sanitarium. He soon finds himself fighting ghosts, a mad doctor, searching his strange inheritance of a casket containing his revered relative's notes on Usher, and struggling with some modern day crooks. John may find out what is behind all the weirdness at Usher Sanitorium, but the price could be very high. John risks death to learn his ancestor's secret to help resolve the events in the present. I know Edgar Allen Poe. He is a friend of mine. Robert Poe is no Edgar Allen Poe. But then again who is. Mr. Poe scribes a modern day gothic tale that would please his namesake. Though the secondary plot involving some nineties laundering and land schemes add little, the primary plot, the Ushers, John, a divorcee, and other secondary characters add immensely to a brilliantly written foreboding sequel. This reviewer recommends reading both novels. Harriet Klausner
Trustpilot
Copyright © 2022 Thriftbooks.com Terms of Use | Privacy Policy | Do Not Sell My Personal Information | Cookie Preferences | Accessibility Statement
ThriftBooks® and the ThriftBooks® logo are registered trademarks of Thrift Books Global, LLC