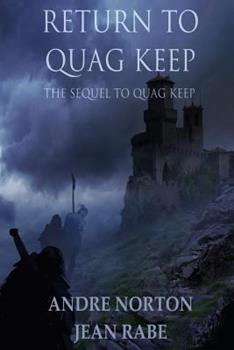 by Jean Rabe and Andre Norton

In the sequel to 'Quag Keep', the classic fantasy based on the role-playing world of Dungeons & Dragons, six courageous adventurers return to the city of Greyhawk to embark on an all new quest, the... This description may be from another edition of this product.

Published by Thriftbooks.com User , 13 years ago
Great book by Andre Norton. I had talked to her on the phone years ago. She was a gracious lady and even sent me two lettrs. I would recommend every book she wrote. I have over 150 of her books! Gene Kroll

Once More Into the Keep

Published by Thriftbooks.com User , 15 years ago
Return to Quag Keep (2006) is the second fantasy novel in this series, following Quag Keep. In the previous volume, the seven heroes have fought their way across the Sea of Dust to the quag surrounding the keep. Gulth provides transportation across the quag to the highland surrounding the keep itself, but oversized fanged frogs dispute their passage. After a final battle with Carlvols and his fighters, the heroes enter the keep and confront the power who has brought them to this world. In this novel, the heroes have come to a city to regroup after leaving Quag Keep. However, Gulth is dying and Deav Dyne has no cure. They meet with Yeleve, Wymarc and Ingrge to pass on their plans and then leave the city to travel to Gulth's swamps. Milo and Naile are waiting in the Golden Tankard, hoping to get a job with a merchant caravan. Meanwhile, they are drinking ale and getting drunk. Three other drunken men enter the tavern and insist that Milo and Naile are sitting at their table. One of the three gets very insistent, but Milo and Naile ignore them. Finally they see someone who looks like a prosperous merchant and get up to approach him. Naile, however, accidentally knocks down the most vociferous of the three drunks and a fight ensues. Milo and Naile have been blamed as the persons who started the fight and thus liable for all the damages. Yeleve and Ingrge get them bailed out of gaol, but they are now indebted to the merchant, Ludlow Jade, and will be working for him without pay as caravan guards. Wymarc stays behind to play in the inn as restitution for the damages. As the caravan wends its way north to several small villages, Yeleve drives one of the wagons. Milo and Naile walk alongside until they tire and then ride on the wagons for a while. Ingrge scouts ahead and behind to search for the bandits expected by Ludlow Jade. He finds partially obliterated footprints ahead of them and then discovers someone following them. Just then the caravan is attacked by the Undead buried alongside the trail. Everyone fights back, but Naile changes into his were-boar form and becomes the most effective combatant against the skeletons and zombies. Although the caravan suffers losses in personnel and horses, they continue to the next village. The man who had been following them is Berthold, a thief and wearer of another bracelet identical with their own. He was himself a gamer and a member of another group seeking Quag Keep, but the others were killed or vanished before they reached their objective. Now he is alone and certain that something is seriously wrong in this world. Berthold has had a dream about a wizard imprisoned below Quag Keep. Although Milo explains that they had thoroughly searched the Quag Keep tower, Berthold points out that they did not search the underground portions. Milo and Naile agree to travel with him to Quag Keep while the others remain with the caravan. In this story, Fisk Lockwood is an agent for Pobe, a sh

A lot of mystery and suprises that really kept me interested

Published by Thriftbooks.com User , 16 years ago
A group of adventurers, who have been whisked away from Earth to a magical land much like the one they play Dungeons and Dragons in, are forced to protect a caravan to pay off their debt that they made when they accidently started a bar fight. On their way to one of the towns, one of the scouts, Ingrge, captures a man who was following them. The man tells them he was sent here to, and why they were whisked away here after they touched the figurines. He also tells them that the only way to get back to Earth and to save Earth is to save a wizard locked in Quag keep. The band of adventurers try to make their way to Quag Keep, while encountering more and more dangers, that help them find out the truth of why they are here. Will the adventurers save Earth or even find their way home??? I thought this was a great book. I love fantasy books so this suited me well, and would be great for fantasy readers and Dungeon and Dragon players. This book was confusing, however, because this was the sequel to the first book, so I reccomend reading the first one before reading this. This book really intrigued me because it had a lot of mystery and suprises that really kept me interested. I also thought it was cool because the main characters were regular people like you and me. The authors are very good writers, and they kept me wanting to read more. Reviewed by a student reviewer for Flamingnet Book Reviews www.flamingnet.com Preteen, teen, and young adult book reviews and recommendations

I enjoyed this story!

Published by Thriftbooks.com User , 16 years ago
Now, I realize that I am dating myself, but I remember when the original Quag Keep was released, and how excited my gaming buddies and I were to read it. We enjoyed the story, with its gaming references and those mysterious bracelets. But I have to confess that I enjoyed this book even more, at times laughing right out loud as the characters from our world tried to cope with life in a fantasy realm. You don't need a gaming background to understand the problems modern people would face, or their dismay at that lack of hot showers and soft beds. This tale gives the characters life and breath, and expands the world around them. It's a wonderful blend of adventure and humor that any fantasy reader would enjoy.

A Sequel that Surpasses the Original

Published by Thriftbooks.com User , 16 years ago
Hailed as the first fantasy novel based on the Dungeons & Dragons roleplaying game, the original Quag Keep was a pretty linear adventure. Like roleplaying gaming at the time, there was little reason for the characters to stay together (other than a magical geas) and a bigger focus on overcoming the obstacles and puzzles to succeed at their quest than there was on character development and interaction. As gaming matured, however, character background and interaction became more important, atmosphere and credibility of the adventuring environment developed substantially, and motivation and group dynamics made characters more complex and interesting. The long-awaited sequel, Return to Quag Keep, parallels these developments in gaming, with more vibrant narrative description, more complex character interactions, and more focus on motivation--all amidst a rollicking fantasy adventure with all the swashbuckling battles and magic that are essential for any adventuring yarn. Comrades even fall by the wayside as things become more dangerous when the party splits to go separate ways, each group following their own agenda--a nod to an all-too-frequent gaming experience that heightens the suspense and credibility of the tale for gamers and non-gamers. Fast-paced and fun. Jean Rabe, a renowned gamer and fantasy writer, proves herself worthy to help carry on Andre Norton's tradition of compelling fantasy novels. Recommended for all gamers and lovers of fantasy, as well as for anyone who read the original. Also recommended fantasy reading: The Finest Creation; The Dragonlance Chronicles; and Warprize. Donald J. Bingle, gamer and author of Forced Conversion.
Trustpilot
Copyright © 2022 Thriftbooks.com Terms of Use | Privacy Policy | Do Not Sell My Personal Information | Accessibility Statement
ThriftBooks® and the ThriftBooks® logo are registered trademarks of Thrift Books Global, LLC