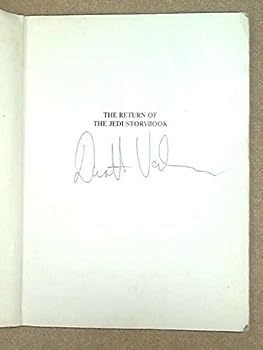 Return of the Jedi

This description may be from another edition of this product. It was a dark time for the rebel alliance...Han Solo, frozen in carbonite, had been delivered into the hands of the vile gangster Jabba the Hutt. Determined to rescue him, Luke Skywalker, Princess...

Published by Thriftbooks.com User , 19 years ago
I really enjoyed this book. It provided an insight into the thoughts and feelings of the main characters which the movie was unable to. Darth Vader's thoughts in particular, are an amazing revelation. Kahn describes very persuasively the incredible lure that the dark side of the force possesses - the heady exultation and sense of unbelievable power make it seem almost sexy. I began to see how Anakin would have been seduced by the dark side. The best part of the novel is the confrontation between Luke and Vader - it is dealt with in far more detail than in the movie. The scene where Darth Vader dies is poignant, even heartrending because we find out what he is thinking and it is this more than anything else, which made me realise what the title "Return of the Jedi" actually means. The only part of this book which I had a problem with is when Vader is unmasked and he is described by Kahn as an "old man". This perplexed me because according to the starwars timeline, Darth Vader would have been about 45 when he died. Apart from this detail, the novel is well done and much better than the movie - even the Ewoks are less silly and irritating than they are in the movie.This book has the distinction of being the only starwars novel that has ever made me cry.

Published by Thriftbooks.com User , 20 years ago
Return of the Jedi has always been my favorite Star Wars movie, both because I like how all the characters matured, (especially Luke) and because it finally delt face to face with the dark side, possibly the best force of evil ever thought of in the realms of fiction. This book exheeded not only my expectations for the book itself (which were very high) but even surpassed the movie in some ways. The author has a deep, highly emotional writing syle which apealed to me greatly, and was so profound that all through the book I truly felt as if was there, a part of the story. Every Star Wars fan should read this at some point, especially those who didn't like Return of the Jedi because they thought it was weaker than the others. I could almost garantee this book would change their minds. Also, the author did a tremendous job on the characters. Just they way they were presented made me truly feel for them, even characters who were previously not my favorites. At times this book had me sitting on the edge of my seat actually wondering if maybe this time it would turn out differently, and the part where Anakin Skywalker dies almost had me in tears. Anyway, I don't think think this book belongs in any particular age range, though probably some of it (in fact a lot of it) would most likely go over the heads of people younger then twelve or so.

It captures the settings and feel of the movie perfectly

Published by Thriftbooks.com User , 22 years ago
A great adaptation of the movie captures a lot of the thrill and excitement of the movie with a bit more insight as can be gained in a novel. You also get a chance to learn several things that you would not have gotten in the movie.A lot of the feel of some of the dire situations are wonderfully captured and you can easily forget it's a novel you are reading.A must for any Star Wars collection

one of the best novelizations ever

Published by Thriftbooks.com User , 22 years ago
This is not a typical novelization. I recommend reading this after you have watched the movie as very important details (you cannot miss this) here are not mentioned at all in the movie. This book is very well written (not as good as Tim Zahn though) and if you're a true SW fan you should read this at least 3 times. Vader's thoughts, Luke's feelings are all written down beautifully and you can really sympathise whith them.This book tells you that Owen Lars really is Obi-wan's brother, how Anakin turned to Darth Vader (the now well known fact that Ben and Anakin had a duel and Anakin fell into a lava pit, thus scarring and disabling him for life) and other fascinating details you can't possibly miss.I read this before the ESB novelisation (7 years ago - which was terrible cos I had such high expectations - didn't show Vader's feelings at all) and this is a definite must read.

This is what Star Wars is all about

Published by Thriftbooks.com User , 22 years ago
You'll never see me cite one Star Wars movie being better than all the others (at least until Episode III comes out, which I'm convinced has the potential to be the best movie of all time), but as far as the novelizations go, Return of the Jedi is by far my favorite.If you didn't already know it, there are a handful of important details included within this book that didn't make it into the movie. These details alone are reason enough for all Star Wars fans to read this book. When Episode III finally comes around, you will be able to appreciate it much more having read this book.However, the true strength of this book is the wonderful portrayal of the characters. So much depth was given to them that it just strengthened all of the reasons why I love Star Wars. And the reason I do love Star Wars is because of the characters. While all the sci-fi stuff is really great, it is the story of these characters that has drawn me into this universe. Reading about Luke flaunting with the Dark Side as he faces against Vader and the Emperor is gut wrenchingly incredible.This is the third part of a three part story. I recommend reading the first two parts first respectively - the third part is a treat you won't regret.
Copyright © 2020 Thriftbooks.com Terms of Use | Privacy Policy | Do Not Sell My Personal Information | Accessibility Statement
ThriftBooks® and the ThriftBooks® logo are registered trademarks of Thrift Books Global, LLC