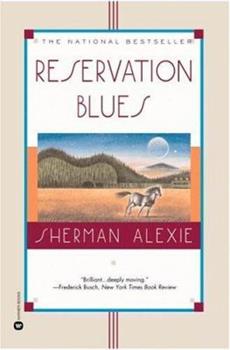 This description may be from another edition of this product. "Many may remember the tale of Robert Johnson, the musician who sold his soul to the devil at the crossroads in exchange for being the best blues guitarist around. What many may not know is that after...

Published by Thriftbooks.com User , 16 years ago
Reservation Blues, which won the American Book Award in 1995, is a touching look at modern life on the Spokane Indian Reservation. When legendary blues guitarist Robert Johnson shows up on the rez with his enchanted guitar and a dark secret, Thomas Builds-the-Fire begins a journey of self-discovery and painful realization that will forever change him and his friends. After the magical guitar ends up in his hands, Thomas forms Coyote Springs, a band made up of two seemingly unmotivated drunks Victor and Junior, and two Flathead Indian sisters, Checkers and Chess. The book chronicles the bands' humble beginnings playing at the local bar on the rez to a hopeful encounter with record executives in New York City. It is within this context that Alexie is able to confront serious issues facing the Indian community today with his own subtle sense of humor. The straight forward plot is layered with metaphorical connections to a general Indian past, while each character is forced to confront haunting personal issues. For Thomas, it is the embarrassment of his alcoholic itinerant father. For Victor, it is the sexual abuse he faced at the hand of the reservation priest. For Checkers and Chess, it is a feeling of loneliness, the search for a "good Indian man," and being seen as outcasts on a reservation not their own. Ironically, their music is the only thing which gives them a feeling of power and inner strength, yet it is the opportunities provided by this music that alienate them from their own people. Alexie believes the problems facing Indians today are the same faced by their ancestors 100 years ago. An obvious example is the names of the record executives for "Cavalry Records," Mr. Sheridan, Mr. Wright, and Mr. Armstrong; a direct link to the Generals who murdered their ancestors. Signing away your freedom in exchange for an empty promise is an idea which transcends the generations for Indians; the record contract and the peace treaty. Another problem Alexie confronts is the relationship between half-breeds and full-bloods. In his own original and comical way, Alexie uses a pick-up game of basketball which pits Thomas' father and the rez drunk, Leonard, against the half-breed Tribal police force. Insults fly, and the comedy that ensues is unforgettable. Reservation Blues was a delight to read. Alexie is a talented writer whose gift for storytelling is enhanced by his social commentary and his humorous presentation. Few writers would be able to tackle such subject matter without the work falling into the category of a tragedy. Alexie's grasp of his people's sense of humor is unparalleled, and the jokes transcend racial and social lines. His ability to remain light-hearted when discussing suicide, alcohol, and rape is an impressive feat. It is not a surprise that he feels it is this very philosophy that gives Indians the ability to move forward and succeed. Focusing on the positive, while making light of the negative is a quality

Published by Thriftbooks.com User , 20 years ago
Through the entertaining story of the rise and fall of a Spokane garage band, Sherman Alexie manages to pack the complexities and frustrations of contemporary Native American Indian life on and off the Reservation. Though his narrative is full of droll wit, his themes are profound. He speaks of the poverty, alcoholism and broken family structure that haunt reservations, of the meanness of HUD housing, surplus food and the local police. As for co-existence with whites: any white left after reading this who thinks white culture understands and treats Indians better these days is as dense as they come. The author explores how outside culture bids for the Indian soul. There is an identity crisis for sure, a rattling sense of purposelessness. Infusing the story with mythic components that extend beyond specific ethnic borders, the author expresses the anger without hate and searches for purpose and redemption. His sentence structure is deceptively straightforward. It drips with allusion and music. In a few strokes, each character becomes a fully developed individual. I hadn't read this talented writer's work before and am in awe of his voice.Some of the other reviewers have mentioned that a movie will be made of this. It will be a challenge to deliver what the book does. What happens to the band, Coyote Springs, at the hands of the New York record company in the book is not good and I wouldn't want Hollywood to do that to this fine work. On the other hand, Alexie is knowing, so I trust he has been careful in letting it go.

Published by Thriftbooks.com User , 21 years ago
Unimaginably rich, funny, tragic, engrossing, intoxicating, layered, tasty and beautiful writing. It's thrilling to find a book that changes the way you read. Completely convincing, fully-realized characters throughout, from Thomas, Victor and Junior to General Sheridan, Robert Johnson and Big Mom. The settings and action are entirely credible and tangible, even though much of it takes place in songs, dreams, legends, visions, fantasy and magic. Alexie composes heart-rending, high-spirited, authentic blues and shows you exactly where they come from. At the same time, he dares or inspires you to reach this spot in oyur own soul. Every page is a revelation or a belly laugh, often both. This book more than fulfills the promise of Alexie's earlier poetry and short stories.If all you know of Alexie's work is the movie "Smoke Signals" you should be aware that key characters in this book have the same names and back stories. However, the written characters are entirely different. Suspend the implanted images and get to know people who are far more interesting.

Published by Thriftbooks.com User , 21 years ago
Alexie's book about Coyote Springs all Indian band is contemporary and he does not lose any of the flavor of being "Indian" with his storytelling (so much like Thomas'). The humor, sadness, love, fame, groupies, experiences he depicts in this tale of the band members and Robert Johnson and how their lives become intertwined with the Spokane Indian Reservation is a masterpiece! I can't wait for the film and to find out who will play the characters! Keep writing, Sherman, because you have been making people like me laugh, cry and continue to be connected with other Indian people who have grown up on reservations to leave for a "better life" in the urban cities (S.F. Bay Area) but who always return "home" (Wind River Reservation, Wyoming).

The blues written down

Published by Thriftbooks.com User , 23 years ago
The blues, unlike any other music I've ever heard, has the astonishing ability to yank your heart out of your chest while making you laugh at the same time. In his first full-length novel, Alexie brings that same quality to his story about five Indians and a rock and roll dream.It's been said that there are two stories in the world: one, someone sets out on a journey, and two, a stranger knocks on the door. In "Reservation Blues", a stranger arrives on the Spokane Indian Reservation at the end of a long journey. The stranger turns out to be the legendary bluesman Robert Johnson, who made a scant 29 recordings before dying of poison in 1938. In the novel, it turns out that Johnson faked his death in an attempt to escape the "Gentleman", an enigmatic figure that anyone familiar with the Robert Johnson mythos will recognize.Johnson leaves his guitar in the back of storyteller Thomas Builds-the-Fire's van, which sends the plot rolling through themes of identity, alienation, tragedy and redemption. All of this, with a liberal sprinkling of the deft comic twist that is a hallmark of Alexie's style, and of the blues itself.Being a musician, or any kind of artist, requires sacrifice--whether it's not getting enough sleep because you have to get up for your day job no matter how late you played the night before, or making a choice that results in losing something you care deeply about for the sake of your art. "Reservation Blues" shows how well Alexie understands this, and how even failure can be turned into success.I first heard of this book in a review journal put out by a science fiction/fantasy bookstore, but Alexie integrates the fantastic elements of his story far more deftly than most writers of fantastic fiction can manage. Although the construction of the story is non-linear, Alexie never loses track of the threads of the tale, and the result is a great read that I've enjoyed over and over again.
Copyright © 2020 Thriftbooks.com Terms of Use | Privacy Policy | Do Not Sell My Personal Information | Accessibility Statement
ThriftBooks® and the ThriftBooks® logo are registered trademarks of Thrift Books Global, LLC