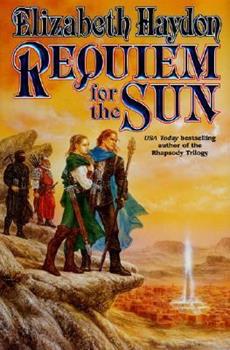 Requiem for the Sun (The Symphony of Ages)

(Book #4 in the Symphony of Ages Series)

It all began with the nationally bestselling Rhapsody Trilogy. A fellowship of three had been forged, companions brought together by fate, driven by prophecy: Rhapsody, a Singer of great talent and beauty; Achmed, an assassin with unearthly talents; and Grunthor, a giant of jolly disposition and lethal skill with weapons. The three overcame great adversity in defeating the F'dor - an ancient evil being intent on destroying the world - their battle...

Published by Thriftbooks.com User , 19 years ago
Requiem for the Sun picks up a few years after the end of the Rhapsody trilogy in a new era of history, where peace reigns and rebuilding is taking place after the battles that culminated in Destiny. Within this era of calm, however, evil is brewing in many different places--a political coup to the south in Sorbold, the bloody plans of a murderous assassin queen bent on revenge, and the long-denied lust of a demonic monster. Haydon is such a master of suspense that I found myself physically anxious as I read, turning pages and being afraid to stop reading. While the focus is more on the male protagonists in this book--the uneasy relationships between Achmed, Gruntor and Ashe, as well as some older-generation characters--it is amazing to see how firmly entrenched these "people" are in my mind, and how much I care about them. The loss of one who has been with the series from the beginning was heartbreaking, but Haydon writes with a brutal honesty that reflects life in all its glory and horror. Sometimes there are no second chances.

Published by Thriftbooks.com User , 19 years ago
"Requiem for the Sun" is Elizabeth Haydon's sequel to the best selling "Rhapsody" Trilogy. From the very beginning of the book she takes a tangled skein of plot threads, from the ancient past and the present, and weaves them into a richly colored and very satisfying novel.We begin three years after the almost cataclysmic conclusion of "Destiny: Child of the Sky." King Achmed and Sergeant-Major Grunthor are overseeing the Bolg restoration of Ylorc. A severe drought is crippling Yarim and their normal water supply has dried up. Only the monstrous Firbolg have the skill and the muscle to restore the water supply. But the nobles of Yarim aren't exactly happy to have the savages in their lands. The Lord and Lady Cymrian, Ashe and Rhapsody, decide it is time to have a child. To the south, the death of the Dowager Empress, and her heir, leaves Sorbold in chaos while they select a new leader. Meanwhile an ancient evil, bent on torture and destruction, looms just over the horizon.We learn even more about the characters we've come to know and love over the course of the "Rhapsody" trilogy and are introduced to other equally enjoyable characters never seen in the series until now. There are plenty Haydonesque plot twists and dialog quips. Readers will be delighted. It was a joy to read."Requiem for the Sun" is another outstanding movement in Elizabeth Haydon's The Symphony of Ages.

Published by Thriftbooks.com User , 19 years ago
I don't have flowery words for why I like this series. the characters are now like old friends to me and I look forward to seeing them each time a new Haydon book comes out. The action scenes are not dragged out, overdramatic or boring. As a Vietnam veteran I think Haydon has a better grip of fighting than many of the male authors out there writing so-called action. This book tore along, making it hard to put down. Further character development of some of my favorites, Sargeant Major Grunthor, Anborn and young Guydion made me even more eager to read whatever else this talent ed author writes.

lives up to the reputation of the Rhapsody trilogy

Published by Thriftbooks.com User , 19 years ago
In Requiem for the Sun, Mrs. Haydon has composed another excellent fantasy tale. In it, we see the return of Rhapsody's ancient nemesis, Michael, the Waste of Breath, as well as development of all the characters that we have come to love: Ashe, Rhapsody's husband, Achmed, King of Ylorc, Grunthor, the giant Sergant-Major, Anborn, Gwydion, and others. I couldn't put the book down, and read it all in one day. A gread read for all fantasy lovers!

Published by Thriftbooks.com User , 19 years ago
I was so sad to see the Rhapsody trilogy end, and have been checking constantly to see when Requiem would be out. I was nervous that this one would not be able to match the magic of the previous three, but thankfully that fear was not realized. Requiem for the Sun is a fast paced, fascinating sequel, beginning a new part of the history of Haydon's amazing world. Achmed the Snake is in his glory here, though showing a vulnerability and obsession that was not evident before. My favorite character, Gruthor the Bolg sargeant, brings even funnier lines and Rhapsody has evolved into a more complex, more real woman. The threads of the past, present and future, as laid out in the first three chapters of the book, form an intricate story with great depth. Elizabeth Haydon has once again shone herself to be one of the best writers of epic fantasy out there.I read this book in one VERY long sitting. I am happy. Now I can go back to agonizing wait for the next one.
Copyright © 2020 Thriftbooks.com Terms of Use | Privacy Policy | Do Not Sell My Personal Information | Accessibility Statement
ThriftBooks® and the ThriftBooks® logo are registered trademarks of Thrift Books Global, LLC