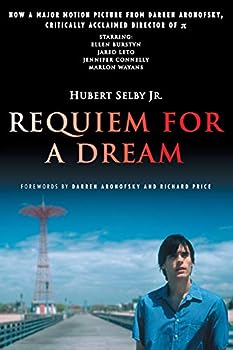 Requiem for a Dream: A Novel

The acclaimed novel that inspired the Darren Aronofsky film--the story of three friends whose pursuit of wealth ends in addiction and tragedy. "To understand Selby's work is to understand the anguish... This description may be from another edition of this product.

It will make your soul cry

Published by Thriftbooks.com User , 17 years ago
Every now and then a book will come along that will move you in ways that are indescribable, uplifting you to the zenith of joy or dropping you into the pits of emotional hell. `Requiem' takes you to hell, slowly descending the steps as you feel life and hope and love failing, falling away from you like strips of rotting flesh. In Darren Aronofsky's forward (Director of the movie) he mentions that the hero of this story is Addiction, and the more you read, the more you grasp the truth of these words. This really isn't a story of Sara or Harry or Marion or Tyrone, but about Addiction and how it changes their lives forever, triumphing over the good that they once held in their hearts. Sara Goldfarb, a lonely widow, receives a phone call telling her that she has one a chance to be a contestant on a television show. With television already her constant companion, Sara becomes extremely excited and vows to loose weight so that she can fit into her red dress for the show. But loneliness and diets don't work well together, so Sara goes to a doctor and gets diet pills. Sara's son Harry is a junkie, and when he and his friend Tyrone Love come across some `dyn-o-mite' heroin, they hatch plans to score a pound of pure, dreaming that this will be their ticket to the easier life they long for. Harry's girlfriend Marion is a wanna-be artist who is waiting for life to happen to her, and she believes she has found what she had been seeking with Harry. Their addictions grow, eating alive everything important to our four characters, their dreams, their hopes, their love, their friendships, their health, and their souls. This is the story of a savage beast running rampant through their lives, devouring humanity without regard or regret. What really impacted me the most was the horrors Sara and Harry suffer at the hands of medical professionals, under the brutal pretexts of pride, profit, ignorance, routine, efficiency, and prejudice. The disregard for these human lives by the doctors who run the institutions and judge the behavior over the illness is gut-wrenching in its heartlessness. The inhuman cruelty of these doctorate-carrying monsters exceeds anything their own monsters created. Selby's prose is difficult to get into at first, unique in that it is a meandering and strewn-together style not often seen or read. Everything flows together, thoughts and spoken words, with minimal punctuation and entirely without quotation marks to indicate spoken text. Stick with it, as the story begins to unfold you will find the style lending itself to the surreal and dreamlike flow of the character's lives, and as you slide into their hopes and dreams, their cravings and failures, Selby's style becomes less and less an obstruction and more of an enhancement to the nightmare he has painted so well for us. If you liked the movie, you will like the book, and if you like the book you will like the movie. Also of note is the stupendously dark score to the movie by

Published by Thriftbooks.com User , 18 years ago
Hubert Selby's 1978 novel "Requiem for a Dream" must certainly rank as one of the most effective depictions of addiction ever written. A critically acclaimed film of the same name, released in 2000 and directed by Darren Aronofsky, has brought more attention to the novel. Although I have yet to see the film, I decided to read the book before watching the movie because I wanted to know what dark visions await me when I finally slide that DVD into the player. If the story is any indication, the film promises a devastating experience. This is not a sunshine and smiles book. It is an unflinching look at addiction and its consequences.There are four central characters in "Requiem for a Dream." There is Sara Goldfarb, a lonely widow who spends her days watching television, eating chocolate covered cherries, and pining for her late husband Seymour. Harry Goldfarb, Sara's black sheep of a son, is another main character. Harry's circle of acquaintances includes his girlfriend Marion, an intelligent, attractive young girl with a talent for painting but paralyzed with defeatist and self-loathing feelings. Harry's best friend is Tyrone C. Love, a young black man who grew up poor in Harlem but would like to escape from the harsh realities of the street. While minor characters come and go during the course of the story, Selby focuses on these four in an attempt to show the trajectory of doom associated with addiction.Things do not seem to go very wrong throughout the first part of the book. It is summer in New York City and time for fun and sun. Harry, Tyrone, and Marion spend their time partying with their friends, listening to music, and enjoying each other's company. Sara watches her television shows and eats her candy in blissful peace, only occasionally worrying about what her son Harry is up to. Even better news lands in the laps of our four characters in short order. Sara receives a phone call from a company that finds contestants for game shows, promising her that all she need do is fill out a questionnaire and she will have the chance to appear on television. Sara is of course elated, and decides that if she really has a shot at winning some dough she should probably go on a diet and lose a few pounds in order to look her best. Meanwhile, Tyrone and Harry implement serious plans to obtain a pound of pure heroin so they can get rich and retire from street life. After putting in a grinding week working, the two earn enough money to purchase some drugs and begin dealing to people they know on the street. As the money flies in, Marion and Harry start making plans to someday open their own little business. Even though the three are users and breaking the law by dealing drugs, the future seems bright.Then winter arrives. Things start to fall apart for Sara, Harry, Marion, and Tyrone. For Sara, an attempt at a diet found in a book does not have the expected payoff. At the recommendation of a neighbor, she goes to a local doctor who prescribes diet pills. Sar

How low can you go?

Published by Thriftbooks.com User , 21 years ago
I've read several books, and seen several movies regarding drug addiction. But none of them compare to "Requiem for a Dream," by far the most accurate and frightening works on the subject. Selby not only gets into the mind of Sara, Harry, Marion and Tyrone, but into the monster itself: addiction. Like a cancer, addiction eats away at ones' soul and dignity. From the beginning the characters are already in a pretty sad state - but they all have dreams. And their dreams are what keep the vicious cycle going. Sara's story made me the saddest. She's so oblivious and so lonely; it's heartbreaking to read. I found Sara's descent so frightening in that she honestly has no clue what's happening to her. Towards the end, I would cringe when a "Sara paragraph" came up as her agony became unbearable for me. Not to discount the others' plights. What made their stories disturbing to me was how they would constantly set new guidelines and restrictions just to keep their habits going. Their decline is so rapid and at times, hard to read. But then again, I was also facinated ("addicted"??) and couldn't put the book down. I saw the movie first before reading the book. That being said, the actors certainly did their homework in understanding their characters. Superb performances by all four, especially Ellen Burnstyn. Hoping Hollywood will ignore the NC-17 rating a recognize those who really deserve an Oscar nod.

a shattering story on delusions of grandeur

Published by Thriftbooks.com User , 23 years ago
Even though, on the face of it, this book may appear excessive and brutal in the latter stages, the true worth of this novel comes from its subtlety. The reader stands in the foothills of hope and glory for all 3 characters at the start, expectations high, their hope feeding into us as we watch there small lives unfold. The book has a pivot that lasts for a very short time as we see them at the pinnacle of their hopes and we are drawn into thinking it all could happen. But with a Selby novel, you know that things will not work out the way you think. What happens is a set of events whereby with each downfall we wonder how the character got there but know that the reasons are imperceptible from the last event. On a downward spiral, this book shows human determination in the extreme. Each person, with only one thing in mind, do anything to sustain the dream, deceiving each other and themselves.I almost wanted to cry after reading this book, coupled with the fact that I have read most of Selby's books, I feel as if I have read the best set of books ever written about human nature, and I am hollow in the knowledge that I will not find anything quite the same
Trustpilot
Copyright © 2022 Thriftbooks.com Terms of Use | Privacy Policy | Do Not Sell My Personal Information | Accessibility Statement
ThriftBooks® and the ThriftBooks® logo are registered trademarks of Thrift Books Global, LLC