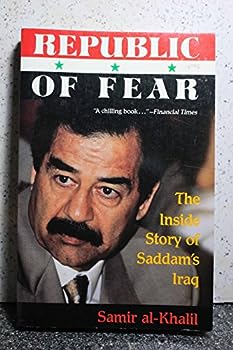 Republic of Fear: The Inside Story of Saddam's Iraq

by Kanan Makiya and Samir al-Khalil

First published in 1989, just before the Gulf War broke out, Republic of Fear was the only book that explained the motives of the Saddam Hussein regime in invading and annexing Kuwait. This edition,... This description may be from another edition of this product.

Published by Thriftbooks.com User , 13 years ago
Saddam Hussein was a member of the Iraqi Baath party. In his brilliant analysis of Saddams Iraq the author Kanan Makiya illustrates how the Baathist regime managed to hold the Iraqi population in its grip for so long. Children from 5 and up where indoctrinated with Baathist ideology in the old Iraq. The children where encouraged to spy and tell on their parents if they heard them backtalking the party. During Baath party rule the Iraqi litteracy rate was raised as the output of state propaganda soared. Women where brought into the workplace and the country was developed. Meanwhile, personal freedoms sank-all in the name of progress. Similar developments can be seen in the revolutionary governments of Cuba, China, Vietnam and Algeria. Development took the place of freedom. Baathist Iraq built itself as a movement and in power on Stalinist norms. It contained both the crude violence and primitive isolationist outlook on one hand while at the same time pushing forward extensive mass education and a modern planned economy. Just like Stalin, the Baath party used the countries "backwardness" as an excuse to resort to extreme measures of violence. And just like Stalin, the Baath party managed to create a more powerfull nation, while at the same time unleashing a regime of terror. It became necessary for Iraqi civilians to wear a "mask". One could never speak openly about the fear, violence and conformity in the society without risking being punished. So the Iraqi citizen would become like "a snail sealed in a shell". The personality becomes liquidated in the oppressor group and its values. Saddams image was everywhere. On a typical radio broadcast his name was mentioned thirty to fifty times an hour. Saddams images appeard on TV several hours a day. Children had to memorize verses in his honor. The USSR and East Germany imported "the methods, investments and structures needed for the effective torturing institutions" in Iraq. The Iraqi Baathist state systematically invaded its citizens privacy, denied their individuality and generated fear. Torture was the "apex of that system". Things like public hangings, corpse displays, rape rooms, executions, confession rituals and torture where all used to breed fear in the Iraqi population. The main idea of Baath government was to uproot individuals from their traditional groups and tribes, thereby destructing the social reality. This would then be replaced by a "new state-centralized network of relationships. The undifferentiated Leviathan like mass that emerged was in principle either hostile to or sealed off from other "partial" non-Baathist sense of belonging." The Baathist view of the world was split up into extremes. On one side the infinetly good(socialism and pan-Arabism) and on the other side the infinetley bad (Zionism, imperialism and foreign agents). Baathism rose to power out of the Pan-Arabist movement. According to the author, this was a movement intent on getting rid of western colonialism a

Published by Thriftbooks.com User , 18 years ago
During this time of transition in Iraq where many believe that going in there was a mistake, this book will remind you as to why we did what we did. The book goes in depth about the brutality of the former Saddam hussein regeime.It goes into such detail about the torture, genocide and other regeime atrocities that I could just about feel the bottoms of my own bare feet being caned until the soles of my feet were completely covered with lash marks and blood.Please read this book to remind yourselves why it was important to remove Saddam Hussein.

A Chilling Look Inside An Evil Regime

Published by Thriftbooks.com User , 19 years ago
This is a very good book to read at the current time. Although it is a bit dated, Republic of Fear presents an extremely detailed and in depth look at Saddam Hussein's Ba'thist regime. The party's history and it's structure are explained very well. The details are extremely chilling. The parallels between the Iraqi regime and that of Josef Stalin are plentiful, from mass killings to child indoctrination. It is obvious early in the book that Iraq is a country ruled by fear and death, where a large percent of the population spies and informs on their neighbors.Also interesting is the operational makeup of the Iraqi security apparatus. It is through this web of overlapping agencies that Hussein stays in absolute control. The man himself is portrayed as a fiendishly clever but thugish brute who will kill absolutely anyone to stay on top. The Iraqi people are identified as cowed sheep who are desperate to find a way to avoid contact with officials or any kind of Iraqi administration.Just hope for a free Iraq, it could be a reality very soon.

The Regime of Terror

Published by Thriftbooks.com User , 21 years ago
Samir al-Khalil depicts Iraq as a ruthless and nightmarish regime that plants the seed of terror within the general populace in order to maintain its political hegemony. This book informs the reader of significant events that accompanied the uprising of the Bathist regime, and the portrayal of Iraqi society with evidence of the encompassing features of the regime are explained in monstruous detail. Essential reading for those who harbor an interest in the effects of totalitarianism in present-day nations.

The Regime of Terror

Published by Thriftbooks.com User , 21 years ago
Cunningly masterful in the analysis of the authoritarian rule in Iraq, I throughly admired the author's inexhaustible illustration of the "Republic of Fear". Samir al-Khalil depicts Iraq as a ruthless and nightmarish regime that plants the seed of terror within the general populace in order to maintain its political hegemony. This book informs the reader of significant events that accompanied the uprising of the Bathist regime, and the portrayal of Iraqi society with evidence of the encompassing features of the regime are explained in monstruous detail. Essential reading for those who harbor an interest in the effects of totalitarianism in present-day nations.
Trustpilot
Copyright © 2022 Thriftbooks.com Terms of Use | Privacy Policy | Do Not Sell or Share My Personal Information | Accessibility Statement
ThriftBooks® and the ThriftBooks® logo are registered trademarks of Thrift Books Global, LLC