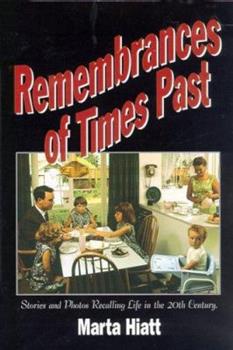 Remembrances of Times Past, A Nostalgic Collection of Stories and Photos Recalling the Way Life Was in the 20th Century

A nostalgic journey back to a time of Model-T Fords, stay-at-home-moms, vinyl long-playing records, telegrams, radio days, strict rules of etiquette and manual typewriters. Here are the personal... This description may be from another edition of this product.

Published by Thriftbooks.com User , 14 years ago
Ok: It wasn't so long ago we were watching tv on tiny black and white tubes, drinking ice cream sodas from a fountain and Diet Coke hadn't been invented (so women strapped themselves into girdles to banish the bulge.) The pictures in "Remembrances of Times Past" remind us of how far we've come in a century. Since my mom dates from the 20's and I from the 50's, we can together pore over this book and think: when Mom was a kid there was barely refrigeration! When I was a kid, the tv was a novelty and the computer in high school was a terminal from Ford Motor Company and you inserted a punched paper tape to run a single kilobyte program. Wow. It's fun to reminisce. Delightful.

Published by Thriftbooks.com User , 14 years ago
This is about the 20th century in America, at home, around the radio, in front of the TV, at the dinner table, in the garage, behind the wheel, in the kitchen. It's about what we ate and what we listened to and watched. What we bought, what we wore, how we behaved and what we did for a living. Marta Hiatt does an amazing job of weaving nostalgic black white photos of people, places and things with her own beguiling narrative interspersed with quotes from ordinary people who lived during these times. The result is book that I literally could not put down. In fact I put aside some other books to read it. Remember doing the dishes with soap that wouldn't make suds in hard water? I do. The grease wouldn't get emulsified. It just got moved around. It took 10-year-old me hours to do the dishes from a big meal. Remember the washboard and the wringer that you were warned about getting your fingers caught in? Remember margarine, white like lard in a clear plastic bag, but with a little red ball that you broke and kneaded into the margarine to make it yellow? Remember corsets and garter belts and stockings that got runs in them? Leopold and Loeb, Al Capone, Patty Hearst, and Charlie Manson? Manual typewriters and the milk man? Or when the iceman did cometh and you put a square sign in the window with a chosen side up showing how much ice you needed? Popeye and spinach? Walking a mile for a Camel, and this ad on page 239: "No curative power is claimed for Philip Morris but--...An Ounce of Prevention is Worth a Pound of Cure!...Call for Philip Morris"? The ad is from 1934. It is interesting how the tobacco companies projected their fears and revealed that even then they knew that cigarettes may cause disease. Hiatt remembers all this and a lot more. You will find yourself turning the pages--which is to be expected since photos of those old ads, movie posters, people in quaint clothing, etc. are just so much fun to see; but what surprised me is just how readable the prose is. Hiatt's direct, unpretentious style and her knack for picking people to quote who are also straightforward make this one irresistible read. If there is any single theme that stands out, it would be the liberation of women, or truthfully, the partial liberation of women that has taken place most profoundly in the twentieth century. Hiatt does an excellent job of chronicling this momentous development and she points to some of the changes it has brought about. The book is organized into chapters concentrating on various aspects of our lives, beginning with "Lifestyle," followed by "Sex and Social Mores," to "Household," through "That's Entertainment," "Fashion," and "Science and Technology," ending with Chapter Twelve, "A Potpourri of Changes." Reading this is a bit like seeing the changes that have taken place in our lifetimes as in a newsreel (remember them?) sped up and vivid, perhaps like our lives passing before us... Irresistible book.

Published by Thriftbooks.com User , 15 years ago
Written by Marta Hiatt and illustrated with a wealth of vintage black-and-white photographs, Remembrances of The Past: Stories and Photos Recalling Life in the 20th Century is a journey of nostalgia touching upon the highlights of modern American History. Vignettes of what American life used to be like and the events that forever transformed it - from the civil rights boycott that began with Rosa Parks' refusal to be discriminated against, to breakthrough advances in germ warfare, to the revelation that women's orgasms came from clitoral rather than vaginal stimulation, to the inception of the Internet. Organized by theme rather than chronologically, the snippets of revelation about how daily American life used to be are often driven home with firsthand testimonies of ordinary people who lived in those times. A virtual American History museum in book form.

Published by Thriftbooks.com User , 15 years ago
I really enjoyed reading this book and recalling so many things I'd long forgotten. The book is not only entertaining, but informative. This "trip down memory lane" provides an interesting review of some significant historical and cultural events of the last century in a lighthearted, personal and entertaining way. I plan to give copies to all my relatives.

Published by Thriftbooks.com User , 15 years ago
Ever wonder what it used to be like? Wondered how your grandparents lived? It's all here in "Remembrances of Times Past," told in stories and hundreds of pictures. You have a cell-phone. They had a party-line. Everyone along the way could listen in. No e-mail then, just telegrams. Music came on 45's and 12 inch long-play vinyl records that only held about 6 songs to a side. This book tells dozens of real-life stories that provide sharp contrast to our 'modern' world, from the horse and buggy right up to today's hectic freeways. Probably the best feature are the hundreds of photographs that vividly bring the stories to life. You'll get a kick out of reading the personal accounts of the 'good old days' by people who were there. I recommend "Remembrances of Times Past" to everyone who ever wondered "What was it really like?"
Copyright © 2022 Thriftbooks.com Terms of Use | Privacy Policy | Do Not Sell My Personal Information | Accessibility Statement
ThriftBooks® and the ThriftBooks® logo are registered trademarks of Thrift Books Global, LLC