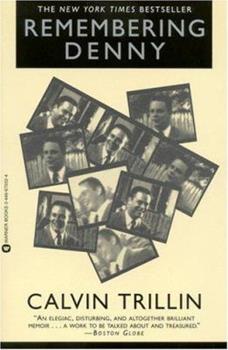 In the 1950s, Denny Hanson was the golden boy, a clean-cut, Rhodes Scholar whose bright future and million-dollar smile made him the subject of a Life magazine feature. The bestselling author of Uncivil Liberties chronicles this life that once held limitless possibilities, but ended tragically.

Published by Thriftbooks.com User , 14 years ago
Calvin Trillin's great work 'Remembering Denny' was re-released in 2005. I read the original back in 1993. It has stuck with me ever since then. I found it to be a brilliant look at unfulfilled promise, as embodied by his Yale classmate, Denny Hansen. Trillin also expertly weaves in two other larger themes. First, as he comes to know of Hansen's homosexuality, Trillin discusses the homophobia of the era (they attended Yale in the mid-Fifties) and the ramifications of that on Hansen's path in life post-graduation. The second theme is the changing of America in the 60s and how that sea-change wrong-footed some 'All-American' boys like Hansen, who were unable to adjust accordingly. I love the brilliant cover of the re-release, depicting a color photo of Hansen and his dazzling smile. It perfectly captures Hansen's then-promising future and why so many were smitten by him.

Published by Thriftbooks.com User , 16 years ago
This book has haunted me for 10 years now. For Roger Dennis Hansen, there was the terrible pain of being in the closet for as long as he recognized he did not have feelings for girls that the other boys did, and that society said he should. And remember, in those days, you were some kind of monster for having same sex yearnings - take a look at the statistics. And then there was the most basic indicator of failure, a deeply dysfunctional family life - no support, no love. One tries and tries to carry oneself with those external trophies, with the support of friends, employers and mentors, and that sometimes works for a while. But the basic perception of oneself is cast, and if there is no beaming, loving face in the mirror, no one is there really giving a damn about your welfare, you go as far as you can - sometimes you make it to the end of the road, but sometimes you crash before then. It is hard. There is a little bit of Denny in a lot of us - I see him in me. I did not have the scholastic glory that this man had, which some of you think should have carried him through to ripe old age, but the similarities remain. This is not a book for ghouls, as Mr. "Jim Burns" opines, nor a treatise on how great Mr. Trillin is, as Mr. "A Reader" states. If anything, Mr. Trillin minces no words in how he failed Denny - I dare any of you to be that truthful about your own failings in your dealings with the humanity around you. A great book that transcends class and race lines, humor and ground floor truth an intoxicating mixture for me.

Published by Thriftbooks.com User , 18 years ago
The book is a whatdunit: what caused an Ivy League golden boy with a million dollar smile to commit suicide at age 55.The boy was Denny Hansen. His family was lower middle class and lived in the San Francisco Bay area. At a public high school, he became all-everything. He attended Yale from 1953-57 where he became good friends with the author, Bud Trillin. There, he was a fifties hero: scholar-athlete, a student leader. and all-around good guy. He was a member of swim team, Deke fraternity and the Elizabethan Society. During his senior year, he was tapped by Scroll and Key. He graduated magna cum laude and was admitted to Phi Betta Kappa. Life Magazine published a photo essay about his graduation. He was selected as a Rhodes Scholar and studied two years at Magdalen College at Oxford. He received a master¹s degree from the Woodrow Wilson School at Princeton, Not bad for a young man with his background.Denny Hansen became Roger D. Hansen. On the career level, he worked briefly in broadcasting, the State Department and at the National Security Council in the Carter administration. He wrote several books on foreign policy that were widely praised. But the Foreign Service rejected his application. Eventually, he was appointed to a chair at the Johns-Hopkins¹ School for Advanced International Studies in Washington. He was a member of the Cosmos Club and the Council on Foreign Relations. On a personal level, Roger never married. He became estranged from his family, his relationships with a few women soured, he gradually alienated his friends from Yale. He became a chronic complainer. He became very depressed. But he always defended right conduct. Near the end of his life, he lived a clandestine gay lifestyle. He bequeathed his pension to his former girl friend, and the remainder of his "huge" estate to Yale. What caused Roger to commit suicide in 1991?. His friends and colleagues offer various explanations. During conversations after Roger¹s death, his Yale friends discovered that they did not know Roger and may have never really known Denny. Trillin¹s explanation is that because of ³poisonous template of the fifties², Roger could not accept his sexual orientation. A reader can interpret his explanation as an attack on values of the Fifties. To me, the most persuasive explanation is an application of the backpack analogy. When a boy is born, he is wearing a backpack. Other people put their heroic expectations for him in the backpack. The more the boy succeeds, the more expectations are put in the backpack and the heavier it gets. Eventually, the loan becomes unbearable and the boy reaches a crisis. In Roger¹s case, instead of emptying the backpack, he chose to kill himself. He had a house, but not a home. Remember, the line from a Robert Frost poem, "Death of the Hired Man"., ³Home is the place where, when you have to go there,/ They have to take you in.² Neither Denny nor Roger had a place where they had to take him in. The details of the book are f

Published by Thriftbooks.com User , 22 years ago
Trillin turns serious and reflects on a Yale classmate who seemed to have it all: a "dazzling smile," charm, brains, athletic talent. LIFE magazine covered Denny Hansen's graduation. But things didn't work out for Hansen, the expected future President, and he died a lonely, obscure professor in 1991. Trillin, in investigating Denny's path through life, draws larger lessons on larger themes than one man's life: struggling with closeted homosexuality; adjusting oneself to expectations that can never be met; growing up in the 1950's when the US in general and pedigreed white men in particular held all the cards. The book is many things: a biography, an autobiography of trillin, a social history, a remembrance of a tragic friend and a not-so-distant, but utterly vanished, era.

College life, the 50s and the weight of great expectations

Published by Thriftbooks.com User , 24 years ago
Trillin sheds dazzling light on college-days in the 50s, at Yale among his peer group of gifted students, athletes, class leaders -- the nation's wunderkind -- there assembled in New Haven. Most remarkable of them all ,Trillin writes, was Roger D. Hansen, "Denny" whose undergraduate life serves as the central metaphor of his classmates, aspirations and dreams for the future. Trillin offers a sharp focus in memoir form of Denny who was much-admired but little-known. Denny's life following undergraduate years becomes increasingly cryptic and desperate. Trillin repeatedly asks the question for us, "Who was Denny?"
Copyright © 2020 Thriftbooks.com Terms of Use | Privacy Policy | Do Not Sell My Personal Information | Accessibility Statement
ThriftBooks® and the ThriftBooks® logo are registered trademarks of Thrift Books Global, LLC