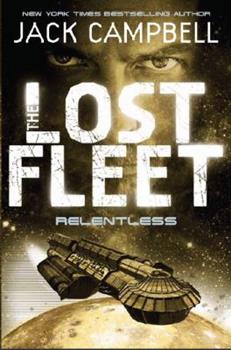 (Book #5 in the The Lost Fleet Series)

This description may be from another edition of this product. Captain John "Black Jack" Geary races to save a group of Alliance POWs from certain death in this gripping novel in New York Times bestselling author Jack Campbell's Lost Fleet series. Alliance...

Published by Thriftbooks.com User , 12 years ago
John Campbell (John g. Hemry) doesn't disappoint again in the latest Lost Fleet novel as they finally near their goal of home. Down to their last supplies, ships nearly at their breaking point and Campbell throws more at them than you could expect the characters to pull off in a believable fashion, yet they do. No last minute saves, no "oh did we forget we had some super weapon in reserve", just honest tactics. However like in all the books tactics that are as true to life as they might get in some distant future. Light only travels so fast and time again we see the impact of that causing heroic "runs to the rescue" taking hours or even days as you watch the monitors showing you what happened some time ago. A refreshing change from warp drives and instant battles. Overall the series seems to be wrapping up now and conclusions are to be found in their trip but as this book closes one part of the saga perhaps it opens new ones as they take the fight to their enemies rather than fleeing for their lives. If the books are anywhere as good as the last few I'll be getting them all quickly.

Published by Thriftbooks.com User , 12 years ago
I picked this series up after the third book had been released and loved it. I have eagerly anticipated each sequel in the series and this one does not disappoint. I agree with earlier reviewers, don't start this series at book 5, start from the beginning and you'll become engrossed in Black Jack's struggles and history. ***SPOILERS*** This book finally brings the lost fleet home, barely. When it ends your so engrossed and expectant to find out what happens next that it's frustrating to reach the last page and know it will be another 8 months before the next book comes out. I expect that the next book will need to focus on politics and personal back stories more than fleet battles in preparation for the next phase of the series that the author has set up so nicely to this point. Besides there are hardly any syndics left....

Published by Thriftbooks.com User , 12 years ago
I love this series, the first two or three books were amazing. The one previous to Relentless, Valiant, is the worst of the bunch so far, but it's main problem was that it was simply too slow. However, Mr. Campbell gets his groove back with Relentless... this book has all the tension and depth of plot as the earlier books, and while it tidies some of them up at the end, it leaves others hanging. I was pleased to see this book bring back the personal strife and tension that comes with the fleet journeying behind enemy lines, the political problems with Rione, the power-play with other senior officers, and the lack of resources, along with the mysterious alien influence. One of my favorite things about this series has always been the characters. One of my concerns with this genre is that sometimes characters take a backseat to battle scenes and technology/philosophy. This series is a nice change from that formula. And while the characterization may not be on the same level as a novel, at least Mr. Campbell makes an attempt to develop characters that are worthy of your concern, and puts you into their head so you feel their struggles and you grow to love, or hate, them. I look forward to the next book.

Once more into the breach

Published by Thriftbooks.com User , 12 years ago
With Geary's fleet running out of fuel and ammunition he must take his ragged fleet once more into the breach in order to make it home. On the way he must deal with conspirators that are willing to sabotage his efforts by any means necessary. Also the threats of an unknown alien force grows stronger. Only his fleet knows of the imminent threat the aliens represent, especially with the hyper gates, being used as weapons. Geary has a plan to stop the aliens from using the gates, but getting home to enact his plan will take a miracle. For anyone picking this book up it's a great series, but you need to start with book one. Lost fleet "Dauntless" In order to get a better understanding of the characters and the sequence of events that have been building. This book ties up a lot of loose ends and will ruin a lot of sub plots created during the first couple of books.

Published by Thriftbooks.com User , 12 years ago
I like it. Simple as that. Read it in one day (could not save it for next day)...Any one who likes the series, i recommended it.
Copyright © 2020 Thriftbooks.com Terms of Use | Privacy Policy | Do Not Sell My Personal Information | Accessibility Statement
ThriftBooks® and the ThriftBooks® logo are registered trademarks of Thrift Books Global, LLC