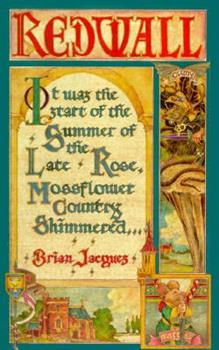 (Book #1 in the Redwall Series)

This description may be from another edition of this product. Perfect for fans of C. Alexander London's The Wild Ones, and Mrs. Frisby and the Rats of NIMH. The question in this first volume is resoundingly clear: What can the peace-loving mice of Redwall Abbey...

Published by Luiito , 10 months ago
Excellent read for the adventurous at heart. A surprise at every turn of the plot. Heroic!

Favorite series as a child

Published by Thriftbooks.com User , 4 years ago
As a child, I absolutely loved these books. I remember reading all of them at my school library and being completely engrossed in them. The Redwall series is a great first fantasy series for young readers, and I highly recommend them to blossoming fantasy fans.
Published by Thriftbooks.com User , 5 years ago
I read the whole redwall series when i was growing up and I still recall them as some of my all-time favourites. Beautiful written imagery, amazing descriptive language, and beautiful story telling are all combined in this wonderfully written book. 10/10 recommend.

The Perfect Transition for Young Readers

Published by Thriftbooks.com User , 18 years ago
'Redwall' is an exciting adventure that never slows, never bores, and never disappoints the reader. You could say it's a simple "good vs. evil" story between the good, honorable mice of Redwall Abbey and the evil forces of Cluny the one-eyed rat, but that would be an oversimplification. It's much more, largely in part to Brian Jacques and his skillful writing. As I was reading 'Redwall,' I realized that this book is the perfect transition between young adult and adult literature. If your child is bored with most of the books written for his level, but maybe is not quite ready for one of the heavies, 'Redwall' may be the answer. Jacques tells a very approachable story with a language that will be challenging for some younger readers, but not beyond their reach. His descriptions and characters are painted with more depth than the average young person's book, but the fun and excitement are retained. Jacques is to be applauded. If your child enjoys fantasy stories and is not quite ready for Tolkien, 'Redwall' is the perfect transition book/series. Enjoy. 350 pages

Published by Thriftbooks.com User , 20 years ago
Brian Jacques's first Redwall book is fantastic! Full of adventure and excitement, it will capture any fiction-lover's attention. Matthias, a clumsy, orphaned mouse, is the main character in this compelling story. He was taken in by the peaceful Redwallers at Redwall Abbey,a great sandstone place. It has a beautiful orchard, a nice pond, and nice beasts living there. In the dining hall hangs a magnificent tapestry of Martin the Warrior, the famed warrior and founder of Redwall. The story was, Martin defeated every foe with his sword and then one day vowed to never fight again. He helped build Redwall. The tapestry is the Redwallers' pride. Martin the Warrior was believed to help the Redwallers at troubling times by appearing in their dreams. One fateful day, a large rat with one eye comes. He is Cluny the Scourge, an evil, notorious rat that had a large army. He is looking for a fortress. As soon as he finds Redwall, he decides he wants to invade it and make it his. While he is in Mossflower, he is set on making Redwall his Cluny's Castle. He tries any way to dominate Redwall. Meanwhile, Matthias is trying to prove his worth. He admires and adores Martin. He works out challenging puzzles to find Martin's sword. He basically tries to become like Martin; an undefeatable warrior who fights for justice. Will he succeed? Will Cluny defeat the untrained Redwall army? This tale is truly superb, filled with sadness and delight. You should read it!

Redwall is one of the best books I've ever read.

Published by Thriftbooks.com User , 20 years ago
This book is the first volume in a long series of books which I consider to be the best series I've ever read. It centers around the adventures of a clumsy, unsure young mouse called Matthias. He is forced to grow up abruptly with the arrival of Cluny the Scourge, a rat warlord who commands vast armies of murderous rats, ferrets, stoats, and weasels. Cluny's aim is to conquer the immense Redwall Abbey, which is Matthias's home. However, the Abbey's inhabitants are peaceful creatures, most of whom have never handled a weapon in their lives. The Abbey dwellers manage to keep Cluny at bay, but their skills are too poor to ward him off for too long. Meanwhile, Matthias has gone in search of a legendary sword that once belonged to the famous mouse warrior, Martin. He hopes to use the weapon to defeat Cluny's infamous army and save Redwall. Helped by different friends along the way, he finally discovers the sword's location, but is unprepared for the grave danger he stumbles across while searching for the sword... This book introduces the reader to Redwall, one of the best children's book series ever written. I recommend the book (and the rest of the series) strongly if one is looking for a creative plot with many twists.

Order of the books...

Published by Thriftbooks.com User , 21 years ago
Just in cose anyone wants to know, the Redwall books go like this: 1. Redwall 2. Mossflower 3. Mattimeo 4. Mariel of Redwall 5. Salamandastron 6. Martin the Warrior 7. The Bellmaker 8. The Outcast of Redwall 9. The Pearls of Lutra 10. The Long Patrol 11. Marlfox 12. The Legend of Luke
Copyright © 2020 Thriftbooks.com Terms of Use | Privacy Policy | Do Not Sell My Personal Information | Accessibility Statement
ThriftBooks® and the ThriftBooks® logo are registered trademarks of Thrift Books Global, LLC