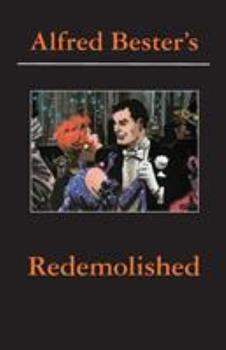 Redemolished makes up the best source for Bester's uncollected short fiction, essays, articles, and miscellaneous writings, including the deleted prologue to The Demolished Man. It gives you full access to the range of Bester's extraordinary five decades as a writer, and lets Bester speak for himself as you follow his restless mind across any subject he could ferret out with his amazing curiosity, drive, and exemplary writing talent. Before his untimely...

Published by Thriftbooks.com User , 15 years ago
Alfred Bester was certainly one of the finest 20th Century American science fiction writers, but his reputation isn't nearly as well known as it was when he died back in 1987. He's probably best known for his two great novels, "The Demolished Man", and "The Stars My Destination", published back in the 1950s, that were stylistically and conceptually unlike virtually anything else published in science fiction during that time. "Redemolished" is a fine collection of his fiction and nonfiction, demonstrating why Bester should still be remembered as one of our great writers of American science fiction; moreover, his nonfiction essays and interviews also show that Bester was quite often a funny writer and a fine literary stylist too. Most of the stories collected in this volume date from the 1940s and early 1950s; his most interesting tale, I think, is among the last, "The Four-Hour Fugue", which predates William Gibson's "Sprawl" series of cyberpunk short stories by only a few years (He is now acknowledged as an important early predecessor of the cyberpunk literary movement.). His nonfiction essays include a strong indictment on the quality of science fiction being published back in the early 1960s that he wrote as a reviewer for one of the major SF magazines ("A Diatribe Against Science Fiction"). Among his interviews are two hilarious ones devoted to film director John Huston and then comedian and playwright Woody Allen. Those unfamiliar with Bester's work will not find this particular volume entirely enlightening, except in emphasizing his broad range of interests, as seen from this vast collection of short stories, essays and magazine interviews. But I think loyal fans will appreciate reading this volume, since it offers some additional literary and personal aspects about Bester and his literary career which have been relatively unknown.

Essential reading for Bester fans - intriguing for anyone

Published by Thriftbooks.com User , 16 years ago
For anyone who has read "The Demolished Man" or "The Stars my Destination" (aka "Tiger! Tiger!") Alfie Bester needs no introduction. His brand of science fiction is, as far as I know, unique in its sheer energy. In his blending of scientific ideas with eclectic cultural, psychological and philosophical background, Bester anticipated (by over 20 years) acclaimed writers like William Gibson and the cyberpunk school. This book presents a lot of Bester's work that would otherwise be inaccessible. It packs ten stories, half a dozen articles, and interviews with John Huston, Rex Stout, Woody Allen, Isaac Asimov and Robert Heinlein into its 500-plus pages. Some of the writing is raw, but it is never dull or predictable, and for a fan it is fascinating to trace the evolution of Bester's style and read his own explanation of how and why he wrote that way. Having seen this book in a public library, I borrowed it and devoured it over Christmas. Although I have read every page, I am now buying a copy. I am not willing to risk being unable to get hold of it again. Bester died in 1988, unfairly neglected, and this book is the closest anyone can get to meeting him.

Published by Thriftbooks.com User , 18 years ago
This book was my initial introduction to Alfred Bester and to Sci-Fi books in general. I could not put it down. I enjoyed all of the stories tremendously. The level of detail as well as the smooth flow impressed me. I'm now an avid Sci-Fi book fan, thanks to Alfred Bester.
Copyright © 2020 Thriftbooks.com Terms of Use | Privacy Policy | Do Not Sell My Personal Information | Accessibility Statement
ThriftBooks® and the ThriftBooks® logo are registered trademarks of Thrift Books Global, LLC