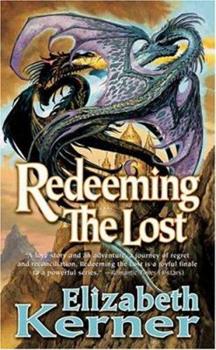 Redeeming the Lost (Tales of Kolmar)

(Book #3 in the The Tale of Lanen Kaelar Series)

The prophecies are coming true and the ancient race of the Kantri-or true dragons-have come back to the world of Men. It was through the actions of Young Lanen Kaelar that the Kantri were reminded of the larger world. It was bravery (and a mad belief in the old tales) that caused the young woman to start a perilous journey to find the great dragons of legend. In doing so, she found not only the reality of the myth but her own true love. He was the...

Published by Thriftbooks.com User , 14 years ago
I read Song in Silence years ago and have been wondering and waiting to find out if the story continued. Finally, I just found and finished reading The Lesser Kindred and Redeeming the Lost. I love the love story, not just romantic love, but the various ties and connections between the dragons and the people. I also love the idea about the war between chaos and order and the fact that the humans (Gedri) made the choice of "choice" in determining whether they would follow chaos (demons) or order (dragons/Kantri). The love stories between the lovers and friends in this book are so touching. I hope Elizabeth Kerner writes more books, because I connected deeply with this wonderful world.

The best of the trilogy. A fine conclusion.

Published by Thriftbooks.com User , 15 years ago
Elizabeth Kerner did a fine job in wrapping up the Tale of Lanen Kaelar. All of the different storylines came together nicely for a fantastic and heart-wrenching ending. Also, this final book had a quicker pace with more action and a headlong rush to the dramatic conclusion, with all of the forces of good cooperating to bring down the nearly unstopable demon master and his minions. The characters and interactions among them are all great, although some parts do get a bit sappy for my taste. The storyline is well-developed and comes to a satisfying ending without much in the way of loose ends. This book in particular stood out as the best of the trilogy to me because of the fast pace and conclusive ending. However, it did seem to me that Kerner must have been told to trim down the story by editing out some of what she meant to include.. A war in the land is briefly mentioned a couple of times and never came into play (and none of the characters even seemed to be aware of it). And some parts of the ending came abrubtly and without much explanation at all, such as Varien's transformation during the last battle, and what about the Sun God Vilkas? But, overall I appreciated the conclusive wrapping up of everything in the last book.

Tears of Pain, Tears of Joy: Which will you cry?

Published by Thriftbooks.com User , 17 years ago
I am not kidding when I say this book made me cry. I wont tell you why, only that this book rules! If you liked the first two at all, you'll love this thrilling conclusion! The third and final book of this trilogy picks up where the last one left off: Lanen has been captured by Berys; Varien and the others, filled with sorrow of Lanen's kiddnapping, head off to the valley to meet the newly arrived Kantri; and the Demonlord, in the form of the Black Dragon, is slowly closing in on land, to finish the work he started many years ago. As the Kantri land back in their original home, Maran, Lanen's mother, arrives with the Farseer. She explains that she was watching the whole time and knows what going and would like to help. Because of her Rashaka (sp?) stench that comes from the Farseer, it takes some time to persuade the other Kantri to welcome her. However, the evil in her hands and imprinted on her soul becomes a great help when Salera, one of the Lesser Kindred, appeares, chased by others that look like her. She tells her friends that these Hollow Ones, small dragons with no soulgem, are only animals. Shikrar places a soulgem of one of the Lost on one of the Hollow Ones forheads, but it is only when Shikrar, Varien, and the Farseer are touching it does something amazing happen: the small dragon becomes one of the great Kantri, a Lost dragon that was stuck in her soulgem due to the battle with the Demonlord. The trio quickly release the others from their prisons. Lanen, cut off from all she loves, is huddled in her cell, with only her unborn children to comfort her. When Berys comes, he discovers her mixed blood. When he leaves, Jamie appeares and frees Lanen from her cell. After a hard battle in which Shikrar battles a Demon Master, Lanen and Varien are reunited. Their reunion is cut short as the Demonlord flies overhead. Not fully knowing what his plans are, our heros follow him, along with all three races of dragons, to put an end to his evil. However, it is only with the help of the strange changes that undergo Varien that they can even hope to win. The battle at the end is so intense! I could not put this book down. In my opinion, possibly the best out of the three. Seriously, there were about three or four times when I cried and I dont normally cry. Keep a box of tissues with you when you get 100 pages from the end. I love all the pet names Varien and Lanen have for each other. The love they have is so special and so powerful! They are the perfect couple! No matter what happens or changes, they always stick together. All in all, a must read for any dragon fan, fantasy fan, or a fan of Elizabeth Kerner! This is a book that you will never regret buying!

Published by Thriftbooks.com User , 17 years ago
Berys the malevolent demonlord has captured Lanen, the humanoid Gedri who awakened the evil wizard?s enemy the dragonoid Kantri. Although he is unaware of the power that Lanen possesses, he feels he can use her as a hostage to force her mate, Varien, a Kantri in Gedri form, to do his bidding. Ultimately, with the help of Lanen?s father, Berys plans to sacrifice his prisoner as a means of ?meeting? the ancient prophecy, which will enable him to destroy the Kantri and allow him through his demons to control the world.However, what the malevolent allies are unaware of is that Lanen is pregnant with her Kantri lover as the sire. She now has the most powerful blood known on the orb flowing through her body as the fetus has given some of that of the Kantri. With no kernnel of hope for success, Varien and his Kantri kin will try to rescue Lanen. Meanwhile Berys has created and moved into a new body the Black Dragon and released the demons from the Six Hells in a final confrontation.This is a terrific conclusion to a strong fantasy trilogy in which good vs. evil with both sides construing that the ancient prophecy meets their needs. Fans will appreciate Lanen?s predicament as a prisoner of an egomaniac with the power to back his insanity. As with most genre miniseries, readers will be better suited to first peruse SONG IN THE SILENCE and THE LESSER KINDRED to increase understanding of the various species and key characters although REDEEMING THE LOST is an exciting conclusion that can stand on its own.Harriet Klausner

Published by Thriftbooks.com User , 17 years ago
Redeeming the Lost is the third novel in the Tale of Lanen Kaelar series, following The Lesser Kindred. In the previous novel, Lanen and Varien were driven off Hadronstead by an the attack of a mercenary band after Lanen and have traveled toward the College of Mages at Verfaren. In the meantime, the apprentice healers Vilkas and Aral have fled Verfaren with their friend Willem to escape false charges of murder by the Archmage of the College. When Lanen became desperately ill in Wolfenden from her pregnancy, Vilkas and Aral were staying at the same inn. Vilkas discovered that the mixed blood of the fetuses was incompatible with Lanen's own blood. With Aral assisting, Vilkas healed the damage, changed her blood to match that of the children, and left Lanen in a healthy pregnant state.Shortly thereafter, Varien met Salera, a Lesser Kindred who Will has adopted. Something in Salera called to both Varien and Lanen. They learned that they could enliven Salera's soulgem, giving her the ability to think at sapient level. Varien and Lanen repeated this process for all the Lesser Kindred while Vilkas and Aral healed the soulgem sockets and other minor wounds.The Greater Kindred have evacuated Dragon Isle to escape the volcanoes and earthquakes. While the rest of the dragons remained on the Isle of Rest, Shikrar flew on to contact Varien and Lanen, but when he reached them, Berys and his demons have grabbed Lanen and taken her away. Varien became half crazy with fear and grief.In this novel, Lanen's mother Maran Vena has been observing her daughter for decades with the Farseer ball and knows where Berys has imprisoned Lanen. Maran starts moving toward Shikrar. Meanwhile, the remaining Greater Kindred land in a field near Wolfenden.Maran meets Varien in the landing zone and starts to tell him about the Farseer. However, the Lost Kindred also come to the field and want something. Shikrar places a soulgem in the socket of one of the Lost Kindred, but nothing happens. However, when Varien, Lanen and Maran all touch the Farseer ball concurrently and place the ball in contact with the soulgem, it comes to life and restores the dragon to full function. The threesome restore all of the Lost Kindred and then promptly fall into a deep sleep.The Archmage Berys receives reports of these happenings via his demon observers. He is amazed, but not worried. He continues to prepare for the ritual that will drain the soul out of Lanen's body and leave her as a puppet and married to Marik. Everything is on schedule.In this story, the Demonmaster Berys intends to conqueror the world using the undead spirit of the Demonlord, who had long ago been thought destroyed by the dragons. Lanen is a vital part of these plans. The Black Dragon is already on the way for the final battle.This story shows a different view of dragonkind. While quite conservative and contemptuous of Gedri -- humankind -- some have come to admire and even love Lanen and have grown to like o
Copyright © 2022 Thriftbooks.com Terms of Use | Privacy Policy | Do Not Sell My Personal Information | Accessibility Statement
ThriftBooks® and the ThriftBooks® logo are registered trademarks of Thrift Books Global, LLC