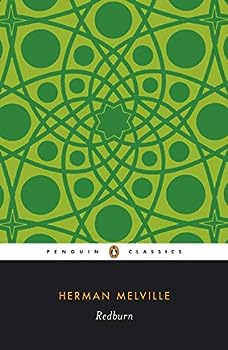 Redburn: His First Voyage, Being the Sailor-Boy, Confessions and Reminiscences of the Son -of-a-Gentleman, In the Merchant Service (Penguin English Library)

This description may be from another edition of this product. Drawn from Melville's own adolescent experience aboard a merchant ship, Redburn charts the coming-of-age of Wellingborough Redburn, a young innocent who embarks on a crossing to Liverpool together...

Published by Thriftbooks.com User , 11 years ago
Melville notoriously said that he wrote "Redburn" strictly to make money, this after the dismal commercial failure of his third book, "Mardi." Unlike that difficult and metaphysical work, "Redburn" was to be "nothing but cakes and ale" in its recounting of Melville's first voyage at sea. The story of 15-year-old Wellingborough Redburn (Melville himself was actually 20 years old on his first voyage) is indeed entertaining, and frequently very humorous, but it is certainly not a throwaway potboiler. It's a classic bildungsroman, the story of a naïve youth who is forced to grow up fast under trying circumstances. "Redburn" was written only two years prior to "Moby Dick," and Redburn strikes the reader as a younger Ishmael. Redburn, with little money in his wallet and no prospects on shore, becomes a hired hand on a ship, although this one is bound for England rather than on a doomed quest for the White Whale. Melville brilliantly sets the stage for Redburn's rude awakening among the hardened and bullying crew. Redburn is completely ill-suited - literally and figuratively - for his first trip at sea. He's equipped with a completely useless jacket that ends up shrinking in the rain and pinching his skin. His sheltered background also provides him just enough education and snobbishness to get him into trouble with his crewmates. The early scenes in which he first meets up with the crew, including the hypocritical captain (whom you will truly grow to hate), are hilarious. Redburn also encounters the satanic Jackson, one of Melville's most grimly fascinating characters. His subsequent experiences provide some hard-earned lessons. This is a highly accessible novel, with a more succinct and spare style than you will find anywhere else in Melville. But this is still Melville, and he couldn't write a strictly straightforward tale to save his life, and that's a good thing, for it means we still occasionally get his wise digressions on life, social issues and other matters. It also seems to be Melville's most personal story. You get the sense that Melville must've been shaking his head at some of the memories from his own youth as he describes the adventures and misfortunes of Redburn. This is a great and unforgettable coming-of-age story.

Parzifal at sea and abroad

Published by Thriftbooks.com User , 13 years ago
A tough initiation to sea life for the frustrated and angry young man from the suddenly impoverished family with the formerly wealthy background. His father has died, leaving the mother and several kids without means. Wealthy aunts and uncles do little. He goes to sea, but starts on a wrong foot. The 'Highlander' takes him from New York to Liverpool as a 'boy', but based on the misunderstanding that he is wealthy and that his family is looking after him. Hence he has the whole crew against him. He is excessively ill positioned: a non-drinker and non-smoker, a church-goer and book-reader, overdressed but without the means and the know-how to bring the right clothes and shoes, overeducated, but w/o any sea knowledge, and with conceipts of being a 'gentleman', who might be expected to call on the captain, underequipped (not even the cup and plate for taking his coffee and food rations), and with no instinct for the right kind of etiquette in the circumstances. This is possibly Melville's most personal book, nearest the 'real' experience, much more so than the South Sea adventures, which stay strictly away from the inner world of the man. He exposes his own ridiculousness in a merciless way. He then talks down his literary effort as just work for money, but since when was that a proof of low quality? Appropriately I started reading this treasure on August 1; which however was not a sheer coincidence, rather I read in my calendar that it was HM's birthday, so I thought, what better starting point for volume 2 of the LoA Melville. Considering that this book was first published in 1849, one has to pay attention to the language. Though he was not entirely free from the mannerisms of the epoch, all in all the freshness and directness of the narration is overwhelming. The narrator has the lovely name Wellingborough Redburn, and he is clearly to a large extent modelled on young Melville himself. As a typical American of his time, he thinks, like a majority would probably still think today , that Hamburg is in Holland, if at all anywhere outside the Golden Arches. Young Redburn tries to read the Wealth of Nations, given him by his brother's friend before departure; this turns out to be a particularly lost cause. The encounter fails. It is misplaced in social strata as well as in age group. Maybe good for a Caribbean Cruise, hardly for a North Atlantic Crossing in mid 19th century. While the ship docks in Liverpool, the young man spends some spare time looking around, and one gets the impression that it helps him growing up. He meets a new friend, the mysterious and tragic Harry, who remains a companion during the stay in England and the return trip. The return is dominated by tragedy at sea. The Highlander takes a load of Irish emigrants to New York, boarding under lamentable conditions. When the ship runs into prolonged bad weather, there is famine and a cholera epidemic on board, with not a few casualties. Melville's comments on the way this emigration bus

A deep look at Melville's heart

Published by Thriftbooks.com User , 20 years ago
There are those who read Moby-Dick and say they love it because they're supposed to, because it's marked as a classic American novel; and then there are those who love Moby-Dick because its miraculous prose, its Shakespearean characters and its spirit truly get inside them. Redburn is for the second group: any real fan of Melville's unique philosophy and thorough mastery of style will love this book. Redburn is, to be sure, no Moby-Dick -- it has none of the epic quality of that crowning jewel. But all of Melville's trademarks are here, in a plot which transcends its simple outline -- a boy from a formerly rich, now bankrupt family joins the crew of a merchant ship sailing to Liverpool and comes of age -- to reach the realm of genius. The poetically beautiful imagery and sparkling wit juxtaposed with profound melancholy jump out at the reader. But even more importantly, Redburn opens up a unique window on Herman Melville's soul. Elizabeth Hardwick, in her recent biography of Melville (which I also highly recommend), calls this his most personal work, and she's right -- where later works like Moby-Dick and Billy Budd hid Melville's real experiences behind an obscuring (if brilliant) curtain of fiction and the earliest novels like Typee and Omoo lacked depth in their rollickingly faithful accounts of Melville's sojourns among the Polynesians, Redburn has just the right balance of fact and fiction. It is in many ways a meditation on the author's once-illustrious father -- Allan Melville, who, just like Walter Redburn (the narrator's father) lost all his money and respect -- but it is equally a series of revelations about his youthful mind as he mulls over issues of time, the generational gap and social change. Read Redburn for a real glimpse of the man who would be the greatest American novelist.

Published by Thriftbooks.com User , 21 years ago
"Redburn" is a fantastic story. It is complex, funny and mysterious. Using Wellingborough Redburn as his persona and narrator, Melville writes of his first voyage overseas, when as a young man of 19 he signs on as a common seaman on board the "Highlander", a merchant ship bount for Liverpool, England. In the first few chapters Redburn seems to be mocking himself, using a tongue-in-cheek tone as he describes his romantic notions of sailing to distant lands and his ineptitude as a sailor during his first weeks at sea. The crew mocks him because he is such a poor seaman; they humiliate and tease him. As the story evolves, Redburn becomes more objective and contemplative. He becomes an acute observer in recording the harshness of a sailor's life and in describing the individual characteristics of the Highlander's crew, especially one Jackson, a malignant and powerful sailor who dominates the crew with his relentless venom.In Liverpool, Redburn meets Harry Bolton, a young man who attracts and fascinates him. Harry is obviously a gentleman, and although he is muscular and well built, he exudes a feminine charm. Harry is evasive about his past. Harry intrigues Redburn. Redburn admires Harry although he suspects him of an indefinable evil. Despite his misgivings about Harry, Redburn helps him get a job on the Highlander which, with 500 immigrants who board the ship in Liverpool embarks for America. Melville, through his alter ego, Redburn, tells of the harrowing problems on board the Highlander on the voyage back to America. He describes his strange, ongoing friendship with Harry who proves to be a terrible sailor. And he describes in penetrating detail the awful, slow death of Jackson and its effect on the crew.Some Melville aficionados have implied that Melville reveals homosexual longings in describing Harry Bolton and his attraction to him. But I feel that Melville, like the poet he is, transcends gender when he focuses on the sensuous nature of form, whether ugly or beautiful. "Redburn" is an exalting story of a young man's first voyage. It involves the reader both physically and spiritually.

Published by Thriftbooks.com User , 22 years ago
I'm one of those people who have read MOBY DICK a few times, so I may be biased towards Herman Melville, but I found REDBURN an excellent read. Though it is an argueable point; many believe that REDBURN is based on Melville's first voyage. This may not be interesting to you if you are an adherent of NEW CRITICISM, but for any Melville fan or scholar this book sheds some light on Melville's persona. I noticed some elements of REDBURN that would later surface in MOBY DICK and PIERRE -- as more developed themes. This book starts out as pretty straight forward adventure narrative, but leave it to Herman, by the middle of the book he goes off into his preaching, sermonizing, and editorializing . . . but I like that about Melville. This might sound strange coming from a Melvillian 'scholar,' but Herman Mellville was not a good writer . . . he is an interesting author though, but he makes mistakes, and he often takes his stories through such long and twisted circumloctions that it is no wonder that many modern readers are turned off by him. However, if you love Melville despite his flaws then you will love REDBURN, because it shows the progress that Melville was making towards THE GREAT AMERICAN NOVEL, MOBY-DICK. Herman Melville did not much care for REDBURN when he wrote it. He wrote it quickly and for the money, and then he tried to distance himself from it. He felt MARDI, the novel he wrote just before REDBURN, was the better, but it was panned. On the other hand, REDBURN recieved good reiviews in its day much to Melville's suprise . . . I learned all this in the afterword of the Northwest-Newberry Edition. The detailed history of REDBURN included in that edition is pretty interesting reading in itself if you are a Mevillian, like me.I apologize for any typos . . . but no spell-check.
Copyright © 2020 Thriftbooks.com Terms of Use | Privacy Policy | Do Not Sell My Personal Information | Accessibility Statement
ThriftBooks® and the ThriftBooks® logo are registered trademarks of Thrift Books Global, LLC