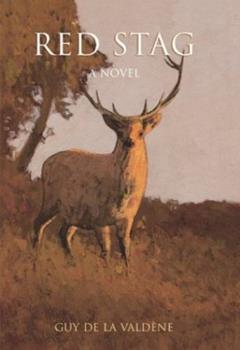 Set in Normandy, France, in the 1960s, RED STAG is a lush, rich novel. Nineteen-year-old bastard Vincent has just returned from boarding school to work on the Count's estate, where his uncle is gamekeeper, where Vincent himself was raised, where his mother, until her early death, was the Countess's maid. Shortly after his return, his uncle is viciously murdered. Vincent vows revenge. It is also deer hunting season, and the village is wild with anticipation...

Published by Thriftbooks.com User , 18 years ago
Vincent was born to an unmarried maid working on the estate of the Count and Countess of Costebelle. He has no idea who his sire was, but his Uncle Serge Lebuison, who also works as the gamekeeper, serves as his male role model as he becomes a young man. When he was nineteen, someone kills his beloved Serge. Count Costebelle hires Vincent to replace his late uncle. Vincent blames poachers who he believes were chasing the famed RED STAG and he vows vengeance.However, Vincent forgets his need for revenge when his childhood friend Nicole Costebelle returns from Paris. Nicole and Vincent begin to fall in love, but they will soon learn why they can never be more than friends even while a hunt for the RED STAG has been set in motion...Though this tale is set in the late 1960s early 1970s, it feels more like a Victorian novel due to the setting, poaching, and the privileged aristocracy. The story line seems subdivided between a murder requiring resolution against insight into the upper and working classes (including professional poachers). Though feeling out of time, readers will appreciate this vividly descriptive character study of the interaction and great divide between isolated social classes.Harriet Klausner

Getting to the essence

Published by Thriftbooks.com User , 18 years ago
Guy de la Valdene's "Red Stag" is a marvelous and very knowing book. Unlike much which currently passes for outdoor literature, this book resonates with seasoned and deeper truths, both of the woods and of the heart, that bespeak a wellspring of authenticity. It is very much an "unpastuerized" novel and as such, will likely appeal to all who like their experiences vital, direct and without denaturing. Valdene should be congratulated for so accurately conveying the essences. A wonderful read.
Trustpilot
Copyright © 2022 Thriftbooks.com Terms of Use | Privacy Policy | Do Not Sell My Personal Information | Accessibility Statement
ThriftBooks® and the ThriftBooks® logo are registered trademarks of Thrift Books Global, LLC