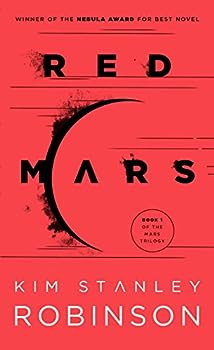 (Book #1 in the Mars Trilogy Series)

This description may be from another edition of this product. Winner of the Nebula Award for Best Novel - Discover the novel that launched one of science fiction's most beloved, acclaimed, and awarded trilogies: Kim Stanley Robinson's masterly near-future...

Rich and insightful portrayal of the colonization of a planet

Published by Thriftbooks.com User , 14 years ago
This is a complex, thoughtful and thought-provoking book. The science (what I can judge of it) is relatively plausible, and very thoroughly researched and presented in multiple fields. But beyond the science, the human drama that unfolds is absolutely riveting. Robinson develops a large number of characters without ever losing the narrative thread of her story. The plots and sub-plots all intertwine and interact beautifully. And the story she unfolds, showing the growth of different philosophical groups, the financial and political struggles, and the human level of impact, is absolutely riveting. Big and complex as the book admittedly is, I could barely put it down. I will necessarily be finishing the entire trilogy, and will definitely look at anything this author has written...

A beautiful portrayal of a giant lifeless rock

Published by Thriftbooks.com User , 19 years ago
Nominally a future-history of Martian colonization, Red Mars covers the initial 100 Martian colonists, the influx of workers as corporations attempt to exploit the planet's resources, and the consequences as conditions worsen. The book is divided into eight parts, each telling the story from the point of view of one of six characters. Each character is interesting and three dimensional. The first, Frank Chalmers, is a stunning example - a machiavellian sociopath who arranges the murder of his best friend. The book suggests early on that the characters are dysfunctional, but most are not, and Robinson describes each personality in a way that's easy to relate to. Most readers will see some of themselves in every character, and will be moved when many disappear from the story as events unfurl.Robinson's prose is easy to read and descriptive. He lovingly describes the Martian landscape, and the events that change the planet. He explains the processes and technologies being used to make the planet more habitable. Mars and its future is viewed through different cultures and ideologies. And Robinson describes political and social systems evolving, growing, and collapsing - the only challenges the colonists seem unable to solve are those that cannot be fixed technologically. The ending is dramatic and, cheesy last line notwithstanding, overwhelming.A word about the politics: Several reviewers have trouble understanding the concept of sympathetic characters not representing the author. Nobody argues that, through Chalmers, Robinson is advocating murder, so why assume that characters portrayed as idealistic hot-heads advocating an enlightened Utopia (not communism) are attempts to convert readers to Marxism? Robinson's prediction of a near future where a handful of democratically unaccountable transnational corporations wield more power than governments is neither unreasonable nor extremist propaganda nor unique; nor is it that people sick of these conditions might reject them for something Utopian, and might make up a sizable proportion of those wanting to leave Earth. Robinson is describing what might happen and why, rather than pushing a particular ideology. It is notable that the consequences of the actions of most of the first 100 are hardly positive: why would an author promote a vision of an enlightened Utopia by having for it such divided, belligerent, builders?If Red Mars has faults, they are that it is fairly humourless, and some of the science (nothing, fortunately, important to the principle of convincing the reader that colonization is possible) is somewhat stretched.There are no ray-guns or bug-eyed aliens: there is much to think about. If you're looking for an airport novel, go read L. Ron Hubbard. If you can watch CNN talking 23 hours a day about scandals effecting minor Democrats, and still grumble "Darned liberal bias", you may be too right-wing to cope with fictional characters disagreeing with you; go read some "Doc" Smith or something

Robinson is the Tolstoy of Sci Fi writers

Published by Thriftbooks.com User , 22 years ago
If Leo Tolstoy was alive and writing science fiction, this is the kind of book he would write. More than just an adventure in space, this novel presents complex, imperfect characters wrestling with questions of philosphy, politics, morality and conflicting personal ambitions against the backdrop of setteling a new world. The scope of the story, the level of detail, the number of characters and the ever shifting focus adds up to a War And Peace in the 21st century.This is not an easy book or a quick read. It requires attention and a willingness to let the author unfold the story in his own way. But it is a richly rewarding experience. While I liked it more than the following two books in the series, I think the entire trilogy represents a monumental achievement. As a shear feat of imagination based on the known possibilities, it is like no other science fiction that I have read. Those readers that fault Robinson for not writing something like Young Christian Republicans Go to Mars are overlooking the obvious - that a fresh start will necessarily mean a lot of conflict (social, political and economic) until some compromise between conflicting priorities can be established. Robinson does not offer any easy solutions to these problems, and the socialistic elements that are introduced into the Martian system have little to do with old terran forms of central planning and control. This is a thoughtful book full of action. Much of the action is mundane; people moving from place to place or building things. Yet it is always fascinating, because the trips are through unfamiliar landscapes and the building is constrained by the hostile atmosphere and limited gravity. Reading these books is almost like a physical experience. I even found myself dreaming the landscape. Like War and Peace, I suspect this is a book I will have to revisit in order to discover what I missed the first time. It's worth it.

Very realistic, absorbing story of our future on Mars.

Published by Thriftbooks.com User , 22 years ago
I tried to read this book a few years ago, but found it very heavy going. However, I decided give it another go. Already having a general idea about the plot and characters made it much easier to read. If you're after an action packed or 'stars and stripes' book about Mars, try 'Mars' by Ben Bova. However, if you want to be immersed in a believable (to an extent) Martian future then this book is for you. Many of the other reviewers here are right in saying this is a very long, detailed story. However, if you can read it at the correct pace, not expecting big things to happen all the time, it's very enjoyable. This isn't a book where you'll be dying to see what's on the next page, you should be just absorbing the atmosphere instead. When I was reading this book, it almost felt as if I was on Mars myself. If you can create images in your mind from the geological and location descriptions, then I can't see how you could fail to be immersed.The book is written from the viww-point of a couple of the main characters. Every hundred or so pages, the character in focus would change. I think this helped give a multi-dimensional picture to the story. Many people have said that the characters aren't very nice people. I think this adds to the realism. The descriptions of what each character thought of one another also helped to build believable images. Overall, a very enjoyable book. I can't wait to read Green Mars and Blue Mars.
Copyright © 2020 Thriftbooks.com Terms of Use | Privacy Policy | Do Not Sell My Personal Information | Accessibility Statement
ThriftBooks® and the ThriftBooks® logo are registered trademarks of Thrift Books Global, LLC