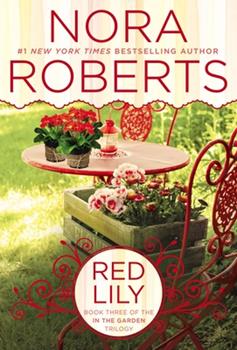 (Book #3 in the In the Garden Series)

Three women learn that the heart of their historic home holds a mystery of years gone by, as #1 New York Times bestselling author Nora Roberts brings her In the Garden trilogy to a captivating conclusion. A Harper has always lived at Harper House, the centuries-old mansion just outside of Memphis. And for as long as anyone alive remembers, the ghostly Harper Bride has walked the halls, singing lullabies at night... Hayley Phillips came to Memphis...

Published by Thriftbooks.com User , 14 years ago
I loved the complete triology. Nora Roberts made you want to finish the book, yet, at the same time, wish for it to never end.

Published by Thriftbooks.com User , 14 years ago
Harper and Haley finally get their story. Through the entire series they have gotten to know and love each other. Haley came to Harper House pregnant and very alone, but now has a large extended loving family. She is desperate to let Harper know her feelings, but fears from both of them keep desires hidden. Amelia, the Harper Bride escalates her violent tendencies as soon as the love between Haley and Harper becomes evident. Haley, Harper, Roz, Mitch, Stella, and Logan race against time to solve the mystery before something tragic happens. The final book in the garden series did not disappoint!! I loved the entire series, and it will be a permanent addition to my library.

Red Lily Rises to the Conclusion

Published by Thriftbooks.com User , 16 years ago
Nora did not disappoint. Contrary to some reviewers, I found this last book in the "In the Garden" trilogy a well-written, well-played out conclusion to a most interesting story. Red Lily is Hayley's story and very descriptive of a young woman with a great deal of love to share and a great desire to share it with Harper Ashby. Unbeknownst to Hayley, Harper had always had an attraction to her, however, neither one felt it was the proper time or circumstance to act upon their feelings. Hayley makes the first move and that is all it takes for their relationship to blossom. Hayley's little girl is just fascinated by Harper and this should make for a "happy ever after" ending were it not for the resident ghost, Amelia. Amelia has taken a special interest in Hayley and decides to take over her body as well as her mind to right the injustice that had been done to her over 100 years ago. Just as Stella and Roz had experienced her wrath, Hayley pays the price of falling in love, thus irritating the Harper Bride. It is most interesting how Nora Roberts weaves a tale of suspense and intrigue with the characters we have come to love in this series. Stella, Logan, Roz, Mitch, Harper, Hayley and David all come together to bring about peace and justice and to uncover the mystery of Reginald Harper (Roz's great grandfather) and the consequence of his actions played out through many generations. You will not want to miss the conclusion to this series. Red Lily is definitely worth the read.

A fitting conclusion for the In The Garden trilogy

Published by Thriftbooks.com User , 17 years ago
Harper Ashby and Hayley Phillips have been circling around their attraction for each other for quite awhile now. Neither wants to ruin the special friendship they have established, but both crave for something more. The chance to love each other is there and they are going to grab it with both hands. Along with Hayley's young daughter Lily, Harper and Hayley start to form a family. However, all is not right at Harper House. Amelia, the ghostly presence that has lived in the house since the late 1890s is getting more violent, more unpredictable. She's been taking over Hayley's body, using Hayley in order to get her story across. It's taking a heavy toll on Hayley, along with Roz and Stella and company. This close knit group must find a way to rid Harper House forever of Amelia's ghost, while also providing a fitting ending for a woman who was treated shabbily in life. Can they do it, or is Amelia destined to haunt Harper House forever? Red Lily is the fabulous conclusion for Nora Roberts latest trilogy. This is a truly creepy novel, more so in my opinion than previous Roberts' trilogies have been. The way Amelia subtly and slyly takes over Hayley's body is spooky to read about, but is counterbalanced nicely by the blooming relationship between Hayley and Harper. Also enjoyable for this reader was catching up with the other tenants of Harper House. This is by far the best of the three stories, and even if you weren't all that thrilled by Blue Dahlia and Black Rose, as I myself wasn't, I think you'll find Red Lily to be a fast-paced, and action packed romance that definitely shows off Ms. Roberts romance talent once again. All in all, this is suspenseful and romantic tale that will keep you on the edge with the mystery surrounding Amelia.

The Best of the Three

Published by Thriftbooks.com User , 17 years ago
As slow and meandering as the first two books in Nora Roberts' In the Garden trilogy were, "Red Lily" is the exact opposite. In a fast-paced, interesting, romantic thriller, Roberts is back to herself as she tells two stories at once: the romance of single mother Hayley and Roz's eldest son Harper--and the escalating haunting of the ghost who wants something from Hayley and is willing to posseses her to get it. But what does she want? Nora comes back alive in this book as she describes Hayley's winsomly darling baby daughter, Lily--one cannot help thinking that the author is describing her own adored grandbaby, it seems so real and true! The romance is perhaps a bit less graphic than in past books, but just as pleasing as always, and the dialogue is fresh and "now" and right. I'm so glad to see Nora back in the groove. I believe that she has settled happily and comfortably into the third stage of a women's life--wife and grandma--and this book positively shimmers with that happiness. I lift a glass of wine to her and this wonderful book.
Trustpilot
Copyright © 2022 Thriftbooks.com Terms of Use | Privacy Policy | Do Not Sell or Share My Personal Information | Accessibility Statement
ThriftBooks® and the ThriftBooks® logo are registered trademarks of Thrift Books Global, LLC