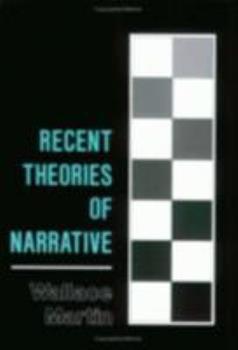 This book ranges over the entitle spectrum of recent theories of narrative to show how they have altered our understanding not only of fiction but of nonfictional forms such as biography and... This description may be from another edition of this product.

Published by Thriftbooks.com User , 24 years ago
Recent Theories of Narrative, By Wallace Martin, reviewed by Allan MaurerWallace Martin summarizes the entire spectrum of narrative theory up to 1986 in his Recent Theories of Narrrative. His survey of the field covers narrative theories as they apply to history and biography as well as literature. While he admits that some of his summaries of various narratology theories are far from thorough in the limited space such a work can give them, he does a fine job of outlining their essential points and noting how they relate to other theories. Martin covers the Russian formalists (Propp, et al), the French and American structuralists (Barthes, Scholes, Culler) and semioticians, providing extremely useful charts showing how each analyzes narrative. He connects modern narrative theory to traditional criticism, Northrup Frye's archetypal approach, and Joseph Campbell's monomyth outline, again showing how they all compare in a chart comprehensible at a glance. His chapters cover previous theories of the novel (James and others) and then proceeds to look at various specific areas of narrative theory, such as point of view, time, characters, and setting. The section on the peculiar grammatical forms we all unquestioningly accept while reading or listening to stories (an apparently universal feature of narrative is the unusual way storytellers use tense) is particularly interesting. Martin considers the reader/narrator questions of Wolfgang Iser, Frank Kermode, and others in his concluding chapters. Throughout, Martin shows not just what has been done in narrative studies up to 1986, he also points out areas needing further clarification, a particularly useful feature to academics who might wish to work in the field. As Martin suggests, the best way to test narrative theories is to attempt to apply them to a narrative and note the results. He does this himself within the book by referring constantly to Katheryn Mansfield's "Bliss," which is included in an appendix. The annotated Bibliography is absolutely first rate. Here you'll find an excellent guide to further research or reading in every field of narratology. Personally, I suspect readers would benefit from perusing Roland Barthes' seminal essay on "The Structural Analysis of Narrative," Wayne Booth's excellent book, The Rhetoric of Fiction, and Seymor Chatman's 1978 book, Story and Discoure in Fiction and Film, in conjunction with this work. Modern narrative study is taking a distinctly scientific turn, and this is the only aspect missing from Martin's otherwise wide-ranging survey. Jerome Bruner's essay collections deal with the cultural importance of narrative in creating individual and cultural meaning and lead the reader to the work of psychologists, philosophers and psychiatrists in narrative study. Philosopher Paul Ricoeur wrote an exhaustive three volume analysis of time in narrative. One time Yale Artificial Intelligence researcher Roger Schrank wro
Trustpilot
Copyright © 2022 Thriftbooks.com Terms of Use | Privacy Policy | Do Not Sell My Personal Information | Cookie Preferences | Accessibility Statement
ThriftBooks® and the ThriftBooks® logo are registered trademarks of Thrift Books Global, LLC