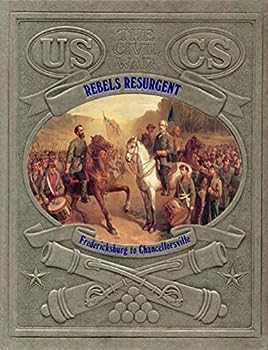 Beautifully bound and illustrated civil war volume featuring Fredericksburg to Chancellorsville. This description may be from another edition of this product.

Published by Thriftbooks.com User , 13 years ago
The Time Civil War Series is a great comprehesive overview of the the Civil War from the causes up through reconstruction. Rebels Resurgent: Fredericksburg to Chancellorsville is a ensential part of this series as this is the period when Lee's Army of Northern Virginia was at its best, not only defeating the Army of the Potomac, but literally fighting circles around them despite being at an extrme numerical disadvantage. Mr. Lincoln on the other hand, possessed his biggest challenge of the war: finding a commanding general in the east, who not only would take the fight to the enemy, but do it in a competent manner. Casualties were high, and results and morale were low. Again, a great book, illustrated in a correlating manner.
Trustpilot
Copyright © 2022 Thriftbooks.com Terms of Use | Privacy Policy | Do Not Sell or Share My Personal Information | Accessibility Statement
ThriftBooks® and the ThriftBooks® logo are registered trademarks of Thrift Books Global, LLC