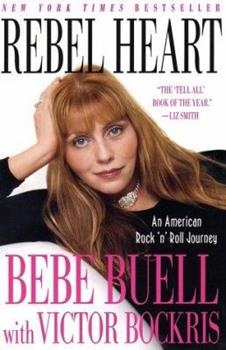 Rebel Heart is Bebe Buell's no-holds-barred account of her life at the center of the rock scene in the '70s and '80s, when rock stars were royalty. A wild child model who took New York by storm, Buell captivated a generation of rock's greatest talents. Her relationships with musicians like wunderkind Todd Rundgren, Aerosmith's Steven Tyler - father of her daughter Liv-Mick Jagger, Jimmy Page and Elvis Costello played out against a backdrop of some...

Published by Reader , 6 months ago
Wise readers realize that memoirs are always embellished. Bebe’s book however contains quite a few whoppers. She claims that she accompanied Todd Rundgren to London in September 1974 for a press event, and that she snuck out and met Jimmy Page behind Todd’s back while Todd was at an event at the Speakeasy. Todd was photographed by Michael Putland on September 5, 1974 in London according to a photo available from Getty Images. Jimmy Page however was in the United States on September 4, 1974, appearing with Bad Company in Central Park according to Led Zeppelin’s official website. Did he drop his guitar after the show and fly straight back to London? Sure anything’s possible I suppose. Bebe also claims she was summoned to Jimmy’s Equinox bookstore later in 1974 - however the bookstore was not opened until 1976. A groupie’s tale just isn’t complete without claiming an affair with Jimmy Page, eh girls?There is no doubt most of Bebe’s book could be similarly deconstructed, but not by me. It was a big fat DNF. Todd Rundgren in Uncut magazine in 2006 stated that Bebe is “incapable of telling the truth.” Elvis Costello in the liner notes for the Armed Forces reissue stated: "On the eve of recording this album a girl arrived on my doorstep from America. At best we were strangers with a coy and theoretical entanglement. I thought that she was to be coming for a short visit and that I might at least satisfy my curiousity about her. However, she turned up with eight pieces of luggage like a mail-order bride and moved in. I was too stupid and vain to resist. She'd later claimed to have inspired most of the songs on this record---all of which were already written when we met. This was said also about the previous release---a chronological impossibility---and many of my other compositions to this day. It is a tragic delusion about which I wish I could say: "I shall not dignify that with a response” but "dignity" doesn't come into this story." It is a shame this woman was only beautiful on the outside, and a shame that she will only be remembered now as Liv Tyler’s mother (oh, yeah, the daughter she lied to for 10 years regarding the identity of her father).

I learned a lot from this book!

Published by Thriftbooks.com User , 20 years ago
I'm going to keep this short and sweet. Loved the book, love the woman who wrote it, love her daughter, love her daughter's father, love all the stories and pictures, love Bebe's self confidence, love the whole vibe of "Rebel Heart". Now stop whining and look for the things in art that are positive and good. There is a lot more good than bad about this book. Some of the negative stuff I read about this book isn't even in the thing. I looked for it and couldn't find it. People just jump on bandwagons and don't really scratch beneath the surface. There is a whole wonderful lesson to this woman's journey and it is, LOVE YOURSELF!!! Whats wrong with that? NOTHING!!! The book is entertaining and honest, SO THERE!!!

Published by Thriftbooks.com User , 20 years ago
REBEL HEART is a great read and can be seen as a source of information regarding modern relationships in the late 20th century.Bebe Buell really packs alot in here, especially regarding her emotional state during her various love affairs.I felt like I was there, reliving all the music and drama of that great era.I would recommend this book because it explains alot about relationships and why people get together as well as why they come apart.You're taken inside the mind and heart of a woman who while a world class beauty was also only human and made understandable mistakes. She overcame all these mistakes and most importantly you learned along with her how to survive some tricky and traumatizing emotional blows.Bebe Buell should be respected as a pioneer for women who are held back from doing what they want to do and I hope that her musical career grows and grows.My review doesnt detail alot of the famed relationships that she was in because I mainly saw the book as a interesting look into the modern relationship and how things like open relationships came to be an accepted norm in many ways. I think that many many people can relate to Bebe's chronicle of unstable relationships mixed in with great love affairs.I think most women have had some sort of Elvis Costello in their lives to some extent and I for one can feel Bebe's pain on that issue and many others that were brought up.I am looking forward to an up coming book Bebe is working on about Rock and Roll etiquette.Good Luck Bebe!

I LOVED "REBEL HEART" WITH ALL MY HEART!

Published by Thriftbooks.com User , 20 years ago
I just loved this book so much that I've already read it again. I highly recommend it to anyone who loves pop culture. Bebe Buell is the number one selling author in Maine right now and she really deserves it. I went to her book signing and it was so crowded that I had to stand. It is great she getting the overlooked state of Maine some attention. Thanks to her and Mr. King, we are literary hip. One of the things I loved most about "Rebel Heart" was the honesty about bad times in a person's life. It was refreashing and candid. Yea, so she's a little big headed but so am I. You don't have to be big headed to love this book. Just a lover of music and the people who make it. Great photos too.

Published by Thriftbooks.com User , 21 years ago
Plain and simple...if you're into real rock n' roll - I'm talkin' The Stones, Zeppelin, Aersomith, and the raunchy, glamorous, crazy lifestyle that surrounds these bands...you'll LOVE this book. Bebe gives the reader a real insight into the decadent rock n' roll scene of the 70s. Personal and detailed accounts of her steamy relationships with the likes of Mick Jagger, Jimmy Page, Steven Tyler, Rod Stewart, Iggy Pop, Jack Nicholson...you name it (!), had me glued to the book. For all us girls out there...imagine Mick Jagger and Jimmy Page competing over you!! The book does get a bit slow towards the end and I too found it odd that practically every love song that came out in the 70s, Bebe claims was written about her (ha), but trust me, the good parts in this book completely overshadow any dull parts.Buy this book NOW!

Published by Thriftbooks.com User , 21 years ago
Bebe Buell seems down to earth and friendly and takes us to a powerful era and time. Her fame via being a FORD model alone would be noteworthy, but the fact, that she was able to SNAG so many cute and powerful pop stars is great! I think that she is quite beautiful and she touched my heart with her vulnerability and also love for animals. This book is powerful and it teaches that even if you are one of the most beautiful woman in the world, you can STILL get your heart broken. I wish Ms. Buell all the best in her future endeavors. This book is entertaining from start to finish. I would really like to have given the book a ten star rating instead of five!
Trustpilot
Copyright © 2022 Thriftbooks.com Terms of Use | Privacy Policy | Do Not Sell or Share My Personal Information | Accessibility Statement
ThriftBooks® and the ThriftBooks® logo are registered trademarks of Thrift Books Global, LLC