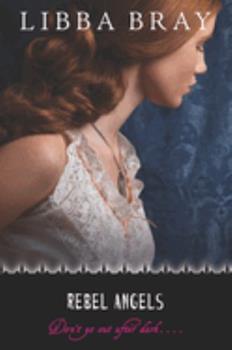 (Book #2 in the Gemma Doyle Series)

Gemma Doyle is looking forward to a holiday from Spence Academy--spending time with her friends in the city, attending balls in fancy gowns with plunging necklines, and dallying with the handsome Lord Denby. Yet amid these distractions, her visions intensify--visions of three girls dressed in white, to whom something horrific has happened that only the realms can explain. The lure is strong, and soon Gemma, Felicity, and Ann are turning flowers into...

Even better than the first

Published by Amanda , 25 days ago
Came in great condition! Such an amazing book series... recommend 10/10! If you love Harry Potter u will more than likely love this series! Through all 3 books u read as these girls grow into young woman and there powers as witches! Such a great series def buy it

Published by Mistress Alfredo , 1 year ago
I love Libba Bray as an author and cannot wait to read this series after loving The Diviners. This was in great condition shipped really fast and was really low priced.

As the story deepens the characters grow more interesting.

Published by Thriftbooks.com User , 17 years ago
Libba Bray has lived up to my greatest expectations with her sequel to A GREAT AND TERRIBLE BEAUTY. More precisely, REBEL ANGELS is the second installment of what is proving to be a well-crafted and nicely plotted trilogy. In this second novel, we are allowed to see the lives of Gemma, Ann and Felicity outside of their finishing school (Spence) as well as outside of the realms. It is generally accurate upper-class Victorian world of dinner parties, teas and evenings at the opera spiced with the gothic-fantasy intrigue of magic and mystery. As I had hoped, Bray further develops her characters - and not just the endearing Gemma. We gain insight into Felicity, Ann, Kartik and even Gemma's brother, Tom. These characters become more complex and compelling as the story progresses and I would imagine that many of those who found the characters to be less-than likable in BEAUTY will find them more appealing. The central plot line revolve around Gemma's quest to find The Temple, now abandoned by The Order, and bind the magic that she freed in the first installment, but the subplots, including a budding romance, the health of Gemma's father and a particularly delightful scheme to present Ann as a member of aristocratic society are just as compelling as what goes on in the magic of the realms. Pippa returns as well, although even more mystery surrounds her new spirit-self. I must commend Ms. Bray on walking a careful and thoughtful like between historical accuracy and pure enjoyment. While she takes a few historical liberties (for example, the freedom with which Gemma moves about in London), she seems to do so in order to maintain a sense of adventure that modern readers would be able to relate to. And, while still centering her novel firmly in the Victorian mindset (for example, Ann's distress over her future), she introduces some timeless and complex issues (trust, power struggles, racism, poverty, child abuse, self-mutilation) that modern readers face as well. Above all, this is a novel to be enjoyed by teens and adults alike and I highly recommend it to all. My only negative comment (if you could even call it that) is that I strongly suggest that one read A GREAT AND TERRIBLE BEAUTY first and then move on to REBEL ANGELS. The plot is so intricate that it would be difficult to simply jump into the middle. Thanks, Libba, for another wonderful story!

Not just for Teens!!!

Published by Thriftbooks.com User , 17 years ago
Firstly, when I picked up A Great and Terrible beauty on a book display it did not occur to me that this was a young adult book. I took it home, began to read it and could not put it down. Only after I read it, did I find out what type of book it was. So what did I do....I went out and bought the sequel, Rebel Angels. These books are fantastic, well written and exceptionally detailed, especially in relation to the authenticity of 19th century behaviours and customs. Gemma is an amazing protagonist, and covets many of the feelings and desires of young girls in the 21st century, clearly showing that the mindset of teenage girls has not drastically changed. However, while the first book caught me off guard with certain events, i did find that Rebel Angels was a bit more predictable at certain parts. Both books i would recommend to not only young adults but older readers, like myself. Even though the characters and romances between them are geared toward teens there are older story lines which are of some interest to older readers. For example the girls' relationships with Mademoiselle LeFarge, Mrs. Nightwing and Miss Moore. As well as certain themes which have meaning to all ages. The hunger for power, the desire to feel beautiful, the agony over losing a loved one, and whether or not to follow what is expected of you or follow your own heart. So to finish, it does not matter if you're 14, 16, 18, or 20, it would do everyone good to step into the world of Spence Acadamy and spend a day or two living like Gemma Doyle.

Published by Thriftbooks.com User , 17 years ago
A Great and Terrible Beauty was one of the best literary revelations I've had this year. I couldn't wait to pick up the sequel, Rebel Angels. Again, Libba Bray has failed to disappoint me. No sophomore slump here! In this wonderful follow-up to Beauty, Gemma Doyle is getting ready for Christmas and a break from the Spence Academy. This is her first Christmas in London after spending all of her life in India. She looks forward to attending tea parties and balls and traveling around in the city with her friends, Ann and Felicity. Despite her friends' protests, she has left the realms behind and is living a normal life. That is until Kartik, sent by the Rakshana, resurfaces and tells her that the magic of the realms is loose for anyone to grab and this could cause chaos. She had shattered the runes that kept the magic safe and things in order (this happened in Beauty). And now Gemma, with the help of Felicity and Ann, must return to the realms and find the Temple that will put everything in order again. But she will face many obstacles. The Rakshana want the magic for themselves, a mysterious and suspicious new teacher appears at the Spence Academy, and Circe is still on the loose. There are various twists throughout the novel. This is a wonderful continuation to A Great and Terrible Beauty. It is just as dark, gothic and fanciful as the aforementioned novel. In this offering, the author tightens up the loose ends left in the previous book but leaves new story possibilities for the next installment. The reader gets many answers regarding the realms, that beautiful and wonderful place where all dreams are possible. I was right about the person I had suspected was Circe since the first book. I am pleased with that development. We also get to see Gemma experience Victorian London society in all its glory. She even has a proper suitor, a young, attractive Englishman named Simon Middleton. The characterization is excellent. There are more layers to the characters, especially Felicity and Ann, that add more depth to the story. We see just how much Ann desires to be a proper, upper-crust young lady instead of the scholarship student, governess-to-be nobody that she is in the face of the nobles. We also get to know Felicity in a deeper level. She is sort of a loose canon with shades of gray -- neither good nor bad. I picked up on various foreshadows regarding her desire to obtain her own magical powers. And that is another thing. You are not certain whether she and Ann would be Gemma's friends were it not for the realms. The scenes with Pippa (from AGATB) are quite disturbing. It was nice to see Pippa again, but she is quite changed. There is some development regarding Gemma and Kartik as well. They really are cute when they're together. Despite her special abilities, Gemma is an ordinary sixteen-year-old girl going through the usual teenage angst. She is a three-dimensional heroine through and through. There are great hi

Published by Thriftbooks.com User , 17 years ago
Libba bray's novel had me hooked from beginning to end. I was excited to get the second book to A Great and Terrible Beauty, hoping that it would have me spellbound like the first. I loved it and I can not wait until the third book arrives!

Published by Thriftbooks.com User , 17 years ago
Victorian Era? Snore. A magical world? Been there, done that. Exclusive girls' school? Do we really need more insight into the lives of the rich and fabulous a la Trading Up? When I picked up Bray's first book, A Great and Terrible Beauty, I was unsure of how good the book would turn out to be. I'm glad that I bought it though because these books are anything but unoriginal or boring. Libba Bray sets up a startling but realistic picture of the Victorian era from the perspective of one of the least powerful people of the time -- a teenage girl. Through her eyes, we're able to get to know the ins and outs of two worlds, the conflicted "real world" we all live in and the seemingly serene "realms" where women can have power and dewdrops turn to butterflies. The main character, Gemma, isn't some overly heroic contrived character either. Bray sets her up to be defiant enough, yet Gemma also has the same concerns and needs as any other normal girl, which is to fit in and be accepted. I loved these books not only for the intricately weaved plot and the bodice-ripping, fast pace that kept me reading more. I also felt like the books addressed other concerns of teenagers and problems that anyone, from any era, can relate to.
Trustpilot
Copyright © 2022 Thriftbooks.com Terms of Use | Privacy Policy | Do Not Sell or Share My Personal Information | Accessibility Statement
ThriftBooks® and the ThriftBooks® logo are registered trademarks of Thrift Books Global, LLC