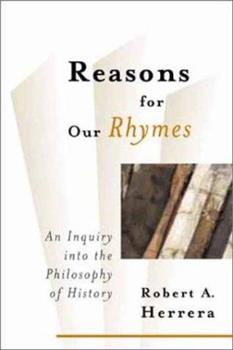 Reasons for Our Rhymes: An Inquiry Into the Philosophy of History

by Robert A. Herrera

Reasons for Our Rhymes provides a fascinating chronological overview of the major philosophical approaches to human history. Herrera clearly presents the ideas and influences of key figures from the past two thousand years -St. Augustine, Vico, Hegel, Marx, and others - showing how each of these thinkers initiated a new paradigm for our understanding of the meaning of history.

Those who do not remember the past...

Published by Thriftbooks.com User , 19 years ago
Not all histories are equal. Anyone who has ever debated the historical accuracy of the Bible knows the principle to which I'm referring here. How the literate classes viewed history in the past is not the same as how we conceive it today. However, there is no easy one-step shift between our current method of history and those of biblical times. How history is done has been an ongoing development of method, just as science, theology, politics, business, and most every other human endeavour has developed. Enter this slim book: `Reasons for Our Rhymes: An Inquiry into the Philosophy of History'. In this book, R.A. Herrera, professor emeritus of philosophy who taught at Rutgers, Seton Hall, and Baruch, follows the development of major twists in the development of historical method and discourse from the early Hellenic origins to the present. Herrera sees the interchange between Hellenic influences and Biblical influences as being significant. It is probably not unusual that people without a sense of history, but rather a sense of mystery, who lived in a cyclically-patterned world, would tend to see the cycles as more important than the separate events. Even the great people and events tended toward legendary embellishment (something that carries over toward Biblical and other ancient trends in writing), and often became part of a cyclical pattern (this tendency toward the cyclical view has never departed from history, particularly from the popular view of history). Herrera credits the early Biblical writers for making a stronger base for the idea of linear time. This is the primary concept for history today. Most philosophies of history waver between the repetitious pattern and the linear development. Augustine, whom Herrera introduces as the first, most fully-developed philosopher of history, cast a shadow from classical times through the Middle Ages into the Renaissance, even up to Hegel and Marx, by solidifying the idea of the non-repeatable. For Augustine, that exemplary event was clear: Christ would not be crucified again -- it was a once-and-for-all event. This seemingly simple statement shatters the entirely-cyclical view. Augustine work in The City of God is a theological/philosophical development of history, which while it incorporates some cycles of events, moves inexorably from a beginning to an end. Developing from Augustinian beginnings and later variations, Herrera continues with in-depth analysis of the ideas of the philosophy of history (which, for significant stretches of time, was a combination of theology and philosophy) through Joachim of Fiore, a monk-mystic compared to the better-known Hildegard of Bingen as one who incorporates visionary aspects to his thinking processes. Joachim developed some spiral ideas (a combination of cyclical and linear patterns) which, while outlandish in interpretation and biblical exegetical incorporation, represented an important point in historical thinking. Joachim was also one to emphasise the e

A Useful Introduction to a Sometimes Difficult Subject

Published by Thriftbooks.com User , 20 years ago
Of the many branches of philosophy, perhaps the most interesting to specialists and laymen alike is the philosophy of history, a subject that has been recently come to the fore of the academic world as those who believe history is coming to an end are still grappling with those who feel history is far from over.Unfortunately, most books on the subject would frighten away even the most fervent scholar. Rare is the academic these days who can write for the educated public. Yet, there are good introductions to the topic and this is one of them. A strong point in Herrera's favor is that this book pretends to be no more than an introduction, and, combined with its brevity, makes for excellent reading.Herrera mixes chapters on the giants of the subject, such as Augustine, Hegel and Marx, with lesser known, but nevertheless influential thinkers as Joachim of Fiore and Vladimir Soloviev. At the same time the author also traces the underlying theme of the philosophy of history from that of Providence through Progress to the current anti-threads of Postmodernism.The only fault in the book is the exclusion of twentieth century existentialist thinkers Jose Ortega y Gasset and Raymond Aron. This ends up leaving a noticeable void because the road from Progress ro Postmodernism travels through the thought of Ortega and Aron.Aside from this, however, the book is a rewarding intoduction to a most fascinating subject and well worth the time and money.
Trustpilot
Copyright © 2022 Thriftbooks.com Terms of Use | Privacy Policy | Do Not Sell or Share My Personal Information | Accessibility Statement
ThriftBooks® and the ThriftBooks® logo are registered trademarks of Thrift Books Global, LLC