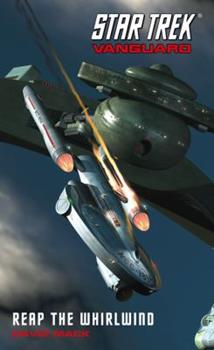 In this third 'Vanguard' novel, the investigation of a mysterious star system leads to a downed ship, a collision of mystery forces, and a difficult decision that will shatter lives and careers.

David Mack does it again!

Published by Thriftbooks.com User , 12 years ago
If you haven't read Vanguard book 1, "Harbinger", go back and do it now. If you like Trek, and you like strong character drama, you won't regret it. After a superb introduction in "Harbinger", David Mack sat out for Book 2. The resulting effort was a mixed bag. Returning here for Book 3, Mack brings the series to top form. You get the Vanguard staple philosophical and moral dilemmas, alien perspectives, and sweeping space adventure. But lacking in Book 2 and back in spades here are the strong characterizations and deft wordsmithing of Harbinger. Simply put, Mack writes great, believable dialog and his narrative flies off the page. You'll find yourself effortlessly blasting through the chapters, eager for more. My only criticism is that it became clear early on how one of the main threads would likely play out. I was a little surprised when the dominos fell exactly that way. Even so, this was a ripping read, expertly handled and thoroughly enjoyable. The adventure is only the vehicle that the characters ride in anyway, and the characters are what make this series great. To those new to Vanguard it's worth saying that there are no status quo resets at the end of each episode. Vanguard is more like an ongoing saga, not an adventure of the week series. Nowhere is that more evident than in this book. Since Mack is not doing Book 4, it will be very interesting to see how someone else picks up the pieces of this installment. In summary, Mack is a phenomenal author and Vanguard is a phenomenal series. I'm hooked. Bring on more Vanguard!

I hope this series continues

Published by Thriftbooks.com User , 13 years ago
An excellent continuation of the Star Trek Vanguard series. The plots, the characters and the stories are very compelling. I have to say that this is science fiction at its best while at the same time the interpersonal dialouge is first rate. The characters deal with real emotional issues which we can all relate to. The story has so many interesting ramifications for future novels.

Published by Thriftbooks.com User , 14 years ago
I have to say I really enjoy the Vanguard Series of books. I agree that with there being a year between books it took a bit to get back up to speed - but it didn't take long for me to remember all the characters. I'm looking forward to Book 4. Even if you're not a Star Trek fan - you'll like this book. And seeing where a character from the Wrath of Khan gets started is quite intriguing. Maybe that can be explored in later books - even if only as a subplot. Enjoy the read.

Best of the series so far...

Published by Thriftbooks.com User , 14 years ago
I look forward to these books each time the come out. This one was hard to put down. Some books plod along, but Reap the Whirlwind just keeps on delivering one punch after another. The ending seems to have almost wiped the slate clean to start anew but the past still lingers and I cannot wait to see what the authors have in store for Reyes, T'Prynn, Quinn, Pennington etc.

Published by Thriftbooks.com User , 14 years ago
David Mack Is becoming one of my favorite authors and book 3 of the Vanguard series is the best in the series so far. You learn more about the storys lines of book 3 than both of the other books. If you have not read any star trek books you need to read this series.
Copyright © 2020 Thriftbooks.com Terms of Use | Privacy Policy | Do Not Sell My Personal Information | Accessibility Statement
ThriftBooks® and the ThriftBooks® logo are registered trademarks of Thrift Books Global, LLC