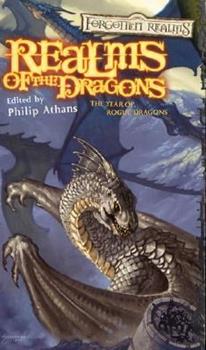 Realms of the Dragons: The Year of Rogue Dragons (Forgotten Realms Anthology)

An all-new anthology showcasing the dragons of the Forgotten Realms world, including a new story from New York Times best-selling author R.A. Salvatore. This anthology features all-new stories by R.A. Salvatore, Ed Greenwood, Elaine Cunningham, and the authors of the R.A. Salvatore's War of the Spider Queen series. It fleshes out many of the details from the current Year of Rogue Dragons trilogy by Richard Lee Byers and includes a short story by Byers...

Published by Thriftbooks.com User , 14 years ago
This book came in great time and was in great condition. I was very happy with ordering and receiving this book.

Published by Thriftbooks.com User , 15 years ago
Here we go. 1. Soulbound by Paul S. Kemp. Dark, mythical and simply brilliant. Kemp keeps his high standard. Sheds some light on Mask's relationship with Cale and Riven. ***** 2. First Flight by Edward Bolme. Set in ancient Netheril. A bit boring and naive for my money. Doesn't deal with dragons that much.** 3. Gorlist's Dragon by Elaine Cunningham. Deals with the past of Gorlist, a villain from Starlight and Shadows series. Fleshes him out a great deal. Otherwise, nothing special. *** 4. The Keeper of Secrets by Ed Greenwood. Thank you for creating this wonderful world Mr. Greenwood, but please stick to design of game material. * 5. The Topaz Dragon by Jess Lebow. Offers some nice dialogues, good description of the setting (An island off the coast of Chult), but otherwise too ordinary. *** 6. Wickless in the Nether by R.A. Salvatore. Artemis Entreri and Jarlaxle always guarantee a lot of fun with their bickering and outsmarting. This story can even be considered a short prequel to the "Promise of the Witch King". Besides two mentioned characters, the story offers nothing spectacular.**** 7. Serpestrillvyth by Richard Baker. Story as unimaginative as its title. At least stays away from cliché endings. ** 8. Waylaid by Thomas M. Reid. Good characterization and cliché story. So unlike Reid. ** 9. Standard Delving Procedure by Lisa Smedman. Funny and different. Just the way it was intended to be.**** 10. An Icy Heart by Voronica Whitney-Robinson. Very short and very strong. **** 11. Penitential Rites by Keith Francis Strohm. The best story of the book, and one of the best short stories ever to appear in FR. This came as a surprise to me, since I thought Strohm's novel "Bladesinger" was awfully written. Make sure to read this one.***** 12. How Sharper Than a Serpent's Tooth by Dave Gross. A fresh story and good writing. Features Talbot Uskreven and his theater. **** 13. Beer with a Fat Dragon by Don Bassingthwaite. If you liked "Yellow Silk", you're going to like this story as well. Witty writing and a different concept. And Tycho, of course. Very Good.**** 14. The Prisoner of Hulburg by Richard Lee Byers. I didn't like this one at all. Strained dialogues, a pointless plot and lots of fighting. Not my idea of a short story. ** All in all, this book offers more good stories, than bad ones. It also has a lot of pages, so it gives it additional value. Very good. I would also like to mention the book Realms of Dragons II. Although it's significantly shorter, and doesn't offer stories by "big guns" of the Realms (Salvatore, Cunningham, Kemp), it has a lot to offer. Check out both of the books.

Published by Thriftbooks.com User , 16 years ago
Thsi book was really good. The stories were exciting and detailed. The best story was "Wickless int he Neither" by R.A. Salvatore. It was good. A reccomended read.

Published by Thriftbooks.com User , 17 years ago
Providing a selection of stories from a range of eras in the Forgotten Realms history and present, this anthology's stories all involve dragons in some fashion. While his is usually the best among Forgotten Realms anthologies, Salvatore's "Wickless in the Nether" is not really anything to rave about. This is another Artemis Entreri and Jarlaxle story, this time having them being manipulated by dragons. The story really does not go anywhere, though it might tie into the next novel involving them. This one just did not do it for me, though it was the reason I bought the book. "Soulbound" gives us a story of a Shadow Dragon and its dealings with some clerics of Shadow. The ending was disappointing, though there might be a sequel at some point, or so I hope. "First Flight" by Edward Bolme is a great read. This one has a wizard of Netheril investigating some mysterious happenings, and being caught up in some deific meddling. Cunningham's "Gorlist's Dragon" was so-so, telling the tale of a drow in Ched Nasad. This is something of a coming-of-age tale, and was worth the read. Greenwood's "Keeper of Secrets" was also a so-so read. This is a story set in Waterdeep, with some familiar characters. Mirt the Moneylender contacts a mysterious figure of rumor in his attempt to solve the murder of one of those in debt to him. "The Topaz Dragon" by Lebow was a nice story. This one has a dragon trying to use those who would steal her egg to her own ends. "Serpestrillvyth" by Richard Baker was a really nice story. While many others have nice touchy-feely resolutions, this one certainly does not. It deals with a band of adventurers in their mission to save a town from the depredations of an evil dragon. "Waylaid" is a good read, brought to us by Thomas Reid. It has a half-elf snared by a white dragon and coerced into doing its bidding. "Standard Delving Procedure" by Smedman started out very promising, though the ending was somewhat abrupt and only partially satisfying. I liked it overall though, with an older dwarf trying to mentor a younger impetuous one. "An Icy Heart" provides a nice story about Dragon Turtles and their attempts to deal with the Rage, the malady that is making dragons go crazy. "Penitential Rites" by Strohm is a murder mystery that was really not that tough to solve. I did not get much from this tale of a half-dragon trying to repent for his past misdeeds. Dave Gross's "How Sharper Than a Serpent's Tooth" is a truly great story. This one has a theater troupe writing and performing a play as a special commission. The characterization and plot development, as well as the details of the day-to-day theater life. This and Byers' story are the two best in the book. "Beer with a Fat Dragon" is another so-so story. This one has characters from the Forgotten Realms' Far East dealing with a dragon legend from that region. Richard Lee Byers' "The Prisoner of Hulburg" is another great story. Evil Zhents, archeological delvin

Published by Thriftbooks.com User , 17 years ago
First of all, the problem with anthologies is typically this: there are always a couple superb stories and a couple of real lousy stories, with the rest just being moderately par, if that. However, "Realms of the Dragons" is much better than some of the more recent collection of short stories that I have read. There are many more exceptionally good stories, and the moderate ones were slightly above average. Of course there are a few that are just plain bad, too, but that is as expected. One great thing is that there are so many familiar characters from other Forgotten Realms stories. It is very interesting to touch in on some of these characters to see what they are up to after the last story they were in, or to see how this short story will affect the next book they might appear in. A few of the better stories were authored by Kemp, Bolme, Salvatore, and Byers. Cunningham's story was pretty decent, but not exceptional for the same reason that some of the others were: this anthology is about dragons, and in some of the stories there is very little interaction with dragons. Sometimes they only make a brief appearance, which is very dissappointing. And in some of the stories, they are just people in disguise. I wish the author's would have collaborated and talked about what they were going to do with the dragons in their respective stories, so there would not be quite so much overlap. However, most of the stories are good, interesting, and definately worth reading. The worst story in the collection was "Standard Delving Procedure," by Lisa Smedman. It was pretty awful and was very dissappointed in the content of the story. Other than that big flop, the collection is very satisfactory.
Trustpilot
Copyright © 2022 Thriftbooks.com Terms of Use | Privacy Policy | Do Not Sell My Personal Information | Accessibility Statement
ThriftBooks® and the ThriftBooks® logo are registered trademarks of Thrift Books Global, LLC