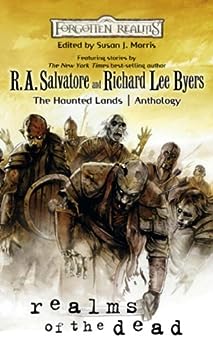 Realms of the Dead: A Forgotten Realms Anthology (The Haunted Lands)

This description may be from another edition of this product. Get spooked by Faern's most chilling ghost stories! The millennia-old history of Faern is haunted with ghosts, vampires, zombies, and all other manner of gruesome undead. This anthology of all new...

A lot of fun

Published by Thriftbooks.com User , 11 years ago
Really good short stories in here. Fantasy meets horror. Something different. I enjoyed it so much I went and purchased more books of this genre.

Realms of the Dead edited by Susan J. Morris

Published by Thriftbooks.com User , 11 years ago
Realms of the Dead edited by Susan J. Morris was released in 2010. This is an anthology based in the Forgotten Realms setting. This anthology is comprised of twelve short stories written by Richard Lee Byers, Lisa Smedman, Erin M. Evans, Bruce R. Cordell, Jaleigh Johnson, Christopher Rowe, Philip Athans, Richard Baker, Rosemary Jones, Ed Greenwood, Erik Scott de Bie, and R. A. Salvatore. This anthology is included with Richard Lee Byer's The Haunted Lands trilogy, and deals with all things undead. "Pieces" by Richard Lee Byers- The story follows the events after the second book in The Haunted Lands trilogy entitled Undead. Bareris Anskuld was a bard in life, and still is in death. Along with the specter of a paladin named Mirror, Bareris seeks revenge for the 're-death' of his love. In this story, Mirror and Bareris go to join a resistance group against the undead horde that the lich Szass Tam rose to take over the land of Thay. But it's hard for undead to join a group opposing the undead. Negatives: 1) Undead. I didn't really care for how a few of these undead were explained. It didn't really paint a vivid picture in my mind and kind of was a little bit of a bummer. Positives: 1) Bareris. Now I liked Bareris in the trilogy, a lot. His thirst for revenge is something that you can really feel. That and he has to be one of the coolest bards in any story. 2) The Ending. It's was dark and it really worked considering the whole premise of the anthology and trilogy itself is about death. The 'twist' it takes I really enjoyed. Overall: 5/5 *Even though I didn't really like the undead description's, it was a interesting story with a great ending and with a character I really enjoyed. "Soul Steel" by Lisa Smedman- This short story is about revenge. A green elf by the name of Trelwyn wants to avenge the death of her brother, who saw their queen having an affair with an lover. The queen had him sentenced to death, and when Trelwyn finds out the truth, she goes to a dark elf lich to make a sword that will steal the soul of the queen. However, during her revenge things don't go according to plan. Negatives: 1) Terms. There were a few words that I had never heard of that pop up in the story. For example, I never really heard of a green elf till this story, and upon some research, they are basically wild elves. Why not just call them that? Also, the word Trunadar is brought up a few times and, at first I thought it was yet another name for the green elves, when in fact it's their village name. Which was never mentioned as being such and just barely hinted at. 2) Ending. I didn't really care for it, but it was bad. I just don't understand how these two characters would seem to trust one another, it just seemed like a stretch. Positives: 1) Revenge Story. I really enjoyed the revenge story. I thought it was really interesting and had a really good premise. It was enjoyable and exciting at the same time. Also, I liked the added ironic touch of using a d
Copyright © 2020 Thriftbooks.com Terms of Use | Privacy Policy | Do Not Sell My Personal Information | Accessibility Statement
ThriftBooks® and the ThriftBooks® logo are registered trademarks of Thrift Books Global, LLC