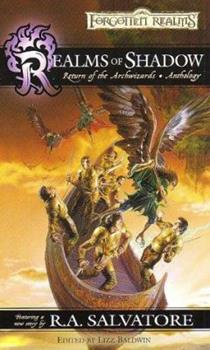 Realms of Shadow (Forgotten Realms: Return of the Archwizard anthology)

A new collection of stories chronicle the lingering impact of the events that occur in the Return of the Archwizards series, with contributions from R. A. Salvatorie, Troy Denning, Ed Greenwood, Elaine Cunningham, and other notable authors. Original.

Entertaining stories out way the time-wasters

Published by Thriftbooks.com User , 19 years ago
This book provides an entertaining read even with the occasional poor story thrown in. The Theme of the book is interesting and several of the stories more than do it justice. The story by Paul Kemp was exceptionally entertaining, and the Lisa Smedman story was also very good. Salvatore's characters are always interesting and, although short, his story was a fun read. There are several others that make the book worth purchasing also, just accept that there will be some stories that will leave you shaking your head in disbelief. This book does prime the pump of interest in the return of the Shadovar adequately to make this an anticipated FR event.

Published by Thriftbooks.com User , 20 years ago
From Lisa Smedman's Netherese mystery tale to Peter Archer's Indiana Jones-esque reprise of a character from Realms of Mystery, Realms of Shadow offers a nifty tie-in which stands effectively apart from the polarizing Return of the Archwizards trilogy (personally I like the trilogy a lot, but plenty of you don't -- do not let that discourage you from buying this anthology). I particularly like Paul Kemp's story (watching this guy. He's going to be Salvatore-big some day), Elaine Cunningham's comedy and Richard Lee Byers' adventure tale set in the ruins of Tilverton. Ed Greenwood's story sets some kind of "sets of villains in one story" record with four - phaerimm, malaugrym, shades and Bleth/Cormaeril renegade Cormyrians.

Published by Thriftbooks.com User , 20 years ago
I thought this book was very good. I do not ususally read anthologies, but I like reading about the Shadovar. I think most of the stories are worth the five stars, but some are pretty depressing. I recommend that you buy this book.

5 stars from me too

Published by Thriftbooks.com User , 20 years ago
This Anthology was very well done and really helps add to the current crisis presented by the return of Shade Enclave in the Forgotten Realms. From front to back, the stories were arranged chronologically beginning with the first one which takes place before the fall of Netheril in -470 DR and ending in the current Realms year, 1372 DR I believe it is. About half of the stories are set in the current time period, while the other stories lend a little background emphasis on Shade Enclave's past. Very nice planning. This should definitely wet your whistle while you await the 3rd volume of the Return of the Archwizards trilogy set to come out later this year.

Published by Thriftbooks.com User , 20 years ago
I'll start off by saying that many people will buy this anthology merely for the R.A. Salvatore short story. The thing is, that's perfectly alright. When I first picked up this book, I looked at the table of contents and found the Salvatore story, "That Curious Sword." I promptly turned to the indicated page and read an incredible short tale involving two amazing characters: the cunning assassin Artemis Entreri and the pragmatic dark elf Jarlaxle. I, along with other FR fans have been looking forward to this piece of writing from the pen of RAS. This marks the first return to his popular duo since the book Servant of the Shard. Long story short, this nineteen page short story is worth the price of the book alone.Alas, like I said many will buy the book for the Entreri & Jarlaxle story, but there are many more reasons why this book deserves a five star rating. There are tales delivered by Troy Denning(whose current trilogy is the backbone of this anthology), the creator of the Forgotten Realms Ed Greenwood, and last but not least an author that I have grown to enjoy just as much as RAS, Elaine Cunningham. Elaine Cunningham dishes out a great story that is connected to her recent Counselors & Kings Trilogy. So all in all, Realms of Shadow is truly a satisfying and enjoyable entry in the FR anthology line. Albeit, not quite as well rounded and long lasting as some of the former FR anthologies(Realms of Valor and Realms of Magic), but it obviously delivers the goods from the well-known FR authors and has more than a handful of good impressions made from some of the new talespinners that have made their first imprint on the Realms.
Trustpilot
Copyright © 2022 Thriftbooks.com Terms of Use | Privacy Policy | Do Not Sell My Personal Information | Accessibility Statement
ThriftBooks® and the ThriftBooks® logo are registered trademarks of Thrift Books Global, LLC