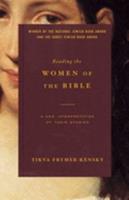 Reading the Women of the Bible: A New Interpretation of Their Stories

Reading the Women of the Bible takes up two of the most significant intellectual and religious issues of our day- the experiences of women in a patriarchal society and the relevance of the Bible to modern life.

An insightful look at the women of the Old Testament

Published by Thriftbooks.com User , 16 years ago
I have read a few dozen such books and I was very impressed by this one. Tikva Frymer-Kensky is very scholarly she often defers to the original Hebrew. Her work is well documented, yet very readable. I was particularly impressed by her treatment of Hagar. Most Jewish authors either portray her negatively or ignore her altogether.

Thoughtfully engaging interpretation of their stories

Published by Thriftbooks.com User , 17 years ago
In Tikva Frymer-Kensky's Reading The Women Of The Bible: A New Interpretation Of Their Stories, gender issues in the Bible are tackled from the perspective of proposing a new taxonomy of four discourses involving women, reflecting the author's background as a professor of Hebrew Bible at the Divinity School at the University of Chicago. Informed and informative, Professor Tikva Frymer-Kensky's new and thoughtfully engaging interpretation of their stories includes liberal quotes from the Bible and insights into early Biblical influences and is very highly recommended reading.

Published by Thriftbooks.com User , 19 years ago
An excellent read and an excellent resource for students and interested parties. Well-written, clear, with humor and insight too.

Published by Thriftbooks.com User , 19 years ago
If you're like me, here's your problem: you're a self-respecting woman, but you're struggling with your faith, whether Jewish or Christian. Why? The Biblical stories at first appear incredibly chauvinistic, and you just don't know if you can handle serving a God who apparently thinks you as a woman should be subservient. You tried going to the local Christian bookstore, but the stuff you found was weak and insulted your intelligence, either making no reference to your equality or advising you to indulge in your own subordination. Worse, some even labeled feminists misguided or even down right witches. Here's your solution: Rivka and her book. Excuse me while I gush, there aren't enough adjectives to describe the woman's brilliance. Firstly, you need not worry that you're reading a book by some housewife who attends church but never picked up a Bible herself and would like to expound on the joys of degradation. This is a professor, a woman who makes her living on biblical studies, having a deep understanding of the original language, the cultural surroundings of the time and what should be labled "context". Secondly, you will neither be left behind nor will your hand be held. Even if you've never read the Bible, Rivka will help to describe the stories she's making reference to, and helpfully provide the actual text, and she never makes an assumption that you know more than you actually do. At the same time, she will not emotionally pamper you with feel-good mush, she'll only throw facts at you, hard and fast, and even old-school students will walk away with many new pieces of information. She will not get up on a soap box with moralistic, abstract declarations, she'll hand you the information and make a few suggestions, leaving you to make your own decisions. Thirdly, she goes off of the beaten path. She's not afraid to stray from conventional interpretations of the texts. You'll see what I mean. By the way, the cover is gorgeous. It just looks pretty on your bookshelf. Most importantly, my faith, which may have been teetering, is now firmly grounded. Besides the Bible, this is the single most important religious book in my library, and there are many. My only two gripes: I wasn't sure if Rivka herself believed in God or the sanctity of the Bible. Also I very much wish she'd approached the women of the New Testament. She also skipped over a great many other women in the old testament and seemed to specifically focus on the Torah, I assume because she's Hebrew. Overall beautiful. I put my recommendation all over it.
Trustpilot
Copyright © 2022 Thriftbooks.com Terms of Use | Privacy Policy | Do Not Sell My Personal Information | Accessibility Statement
ThriftBooks® and the ThriftBooks® logo are registered trademarks of Thrift Books Global, LLC