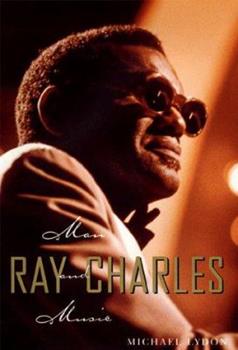 1llustrated with 16 pages of black and white photos, this is the first full-length biography of Ray Charles and the definitive portrait of the man called The Genius of Soul'. Colourful, commanding, ruthless, opinionated and dogmatic, Charles stands among the most influential pop musicians of the last half century and his musical innovations have touched everyone from Elvis to Prince, from Aretha Franklin to Billy Joel. A fascinating analytical look...

Published by Thriftbooks.com User , 13 years ago
Michael Lydon has done a magnificient examination and bio of Ray Charles. One comes away from this book realizing at least two important points: One, that the movie "Ray" is highly fictionalized and does a great disservice to Charles in inadequately relating the amazing ability and range of accomplishments of this man. And second, the evidence builds as the bio progresses to suggest by the end that here was one of America's supreme musicians of all time, if not at the top. This is no gloss job about Charles. All in all, a fascinating read by a very good researcher and writer (and musician himself).

Published by Thriftbooks.com User , 16 years ago
I have never been a Ray Charles fan,and when the movie Ray came out,I was sadden,that I had missed a great talent.I brought the DVD version of the movie,and then started reading everything there was about the man. After reading this book,which I enjoyed I found that I did not like the man. I think that the writer of the book,told about Ray,being cheap,being a womanizer and the way he treated people in general.I think that the movie version of his life,glossed and sugar coated his life,his career and his marriage.I came away feeling very sorry for his wife and his children,as it appears they were truly the victims of Ray Charles I,for one will not spend any more money on the Ray Charles legend.

The newly expanded paperback version of a classic biography

Published by Thriftbooks.com User , 18 years ago
Now in a newly updated edition from Routledge, Ray Charles: Man And Music by Michael Lydon ("Rolling Stone" founding editor and an influential music journalist) presents and documents the live and contributions to contemporary American music by Rhythm & Blues singer and musician Ray Charles. Afflicted with blindness at an early age, suffering the loss of his family at fourteen, Ray Charles went on to become one of the best known and best liked American music performers. This outstanding biography doesn't flinch from Charles struggle with heroin addiction or his problematic career at Atlantic Records. Originally published in 1995, this new edition now includes chapters on the last seven years of his life making Ray Charles: Man And Music very strongly recommended reading for anyone who has enjoyed his music and admired his ultimate triumph over adversity.

For Music Fans Only?

Published by Thriftbooks.com User , 22 years ago
If you only reading this book because you want to know exactly how friendly Ray Charles is, you might end up disliking him. This book is a tell it like it is. After reading it, I developed mixed emotions towards Brother Ray, that I didn't have before reading it. However, this book is truly a musician's favorite.

Published by Thriftbooks.com User , 23 years ago
I found this book extremely readable and comprehensive. Charles has lived a huge life, and this book does justice to that life. While some might think it is too insular regarding Charles and his music, that would seem to be a true reflection of his life as he lived it. Many of the minor characters are vividly drawn. Lydon's style is graceful and evocative. Music fans should rush out and buy this book!
Trustpilot
Copyright © 2022 Thriftbooks.com Terms of Use | Privacy Policy | Do Not Sell My Personal Information | Accessibility Statement
ThriftBooks® and the ThriftBooks® logo are registered trademarks of Thrift Books Global, LLC