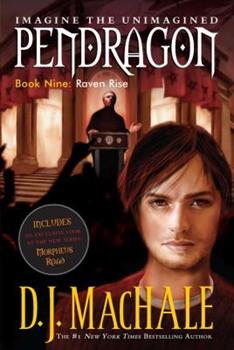 (Book #9 in the Pendragon Series)

This is where it begins. The showdown for Halla. At stake is nothing less than all that ever was and all that will be. There's only one thing missing--Bobby Pendragon. While Bobby remains trapped on Ibara, the battle moves to his home territory: Second Earth. Mark Dimond and Courtney Chetwynde are left on their own to defend Second Earth agsinst the forces of Saint Dane. They must face off against a charismatic cult leader who has risen to power by...

Published by Thriftbooks.com User , 13 years ago
After Pilgrims of Raine I was very excited when I heard that another book was coming out. Raven Rise really delivered. The characters were dramatic yet comical. I normally don't like first-person point of view stories, but this is the exception. The story starts after Bobby trapped himself and demonic Saint Dane on the tropical Ibara, yet it seems that his sacrifice was pointless for the Convergence has already taken place. On Third Earth, Patrick wakes up to a dystopian future Earth. He meets up with Mark and Courtney in 1930 and they go to Second Earth to try and stop Saint Dane's plans. Nevva is disguised as Tello (trying to get Bobby to fall in love with her; no luck) and lets a few minor details slip. Bobby then finds out that Saint Dane has escaped Ibara, and goes after his to his home territory Second Earth. A cult leader named Alexander Naymeer (an English idealist, brainwashed by Saint Dane) is creating chaos with Ravina (the name of the cult). Bobby, Alder, Mark, and Courtney try to avoid the Ravinans while looking for the leader of the rebellion. In a giant battle known as the Bronx Massacre almost half the characters die or at least seem to be dead (leaving clinchers for the next book), and Saint Dane seems to have won. Yet the ending gives readers hope for Bobby and the travelers, but I won't give to much away for the ending is very shocking.

Just what I wanted- Not what I expected

Published by Thriftbooks.com User , 13 years ago
The last 3 to 4 chapters of this book are the best of the whole series. Honestly, this book, if you've read the past ones, is a must read. There isn't an introduction of a whole lot of information but there are times in the book where new things are learned. You'll start to notice that some of the things said in the past book were really [really] important yet did not seem like it at all. At some points of the, the past books that is, some of the things said seem meaningless- nothing but politeness. But, reading this book- with the help of it being pointed out that this has been said before- you'll find out that wasn't so. Read it!

PENDRAGON-THE SINGLE MOST UNDERRATED PIECE OF ENTERTAINMENT OF ALL TIME

Published by Thriftbooks.com User , 13 years ago
Everyone knows about Harry Potter, Eragon, and Artemis Fowl. But whenever I ask anyone if they've read Pendragon, I get a funny look. No one I know has even heard of it. That's unfortunate, because it is one on the best fantasy series ever. The plot goes something like this: Bobby Pendragon is a fairly normal boy. One day his Uncle Press picks him up and whisks him off to another dimension. He learns that he is a Traveler, one of a special group that can travel through space and time by using a "flume", a sort of tunnel that transports them quickly from place to place. The Travelers have to battle the evil Saint Dane and stop him from turning the dimensions, or territories, to chaos. I'm no sucker for any fantasy book. Harry Potter really was original. Fowl was too. Eragon, not as much, but it was still enjoyable. However, books like Charlie Bone (seemed like a complete HP ripoff to me) displease me. Pendragon is completely original. It's a stunning mix of science fiction and fantasy, magic and dark matter. While some book series' with the general plot of "they travel to territories all over space and time" might have the cliche "dino worlds" and "future robot world", D.J. MacHale keeps the territories new and exciting. The characters are also not generic; they have many sides and you really end up caring about them. The only thing some people might find wrong is the writing style. D.J. is a TV guy. He's written several teleplays. Naturally, reading this book is like watching a TV show. Bobby Pendragons journals feel like separate episodes, and the plot lines changing from Mark and Courtney in First Earth to Bobby on Ibara keep it flowing. The style also makes the book much easier to visualize, which I think is key for a book. MacHale is descriptive in all the right places. Now onto this specific book. This is the best Pendragon book. Hands down. It has the worst villains (Naymeer and Nevva are amazingly terrible in this book) while giving SD an almost human side. He actually believes all he is doing is right. Also, Travelers like Patrick and Alder are given a chance to shine for once, and shine they do. And by the end, you'll be yearning for the last book. The best part about these books is the intensity. The stakes always feel high, and the pages keep on turning. For some reason, Pendragon has never caught on like HP or Fowl. You don't see any fan sites devoted to the books. But they deserve the acclaim, and you should help give it to them.

All Halla Has Broken Loose!

Published by Thriftbooks.com User , 13 years ago
This installment of Pendragon is both exhilarating and disappointing all at the same time. There is so much going on and so much to take in from the past books that the bulk of adventure from any one territory is muted, which disappoints me because I love the individual experiences on each of the territories. I still am lingering on the past descriptive genius of unique territories such as Cloral and Eelong! The cool part is that the story line all still works well and I could not put this book down. I am definitely left with more questions than answers, which leaves a tall order for finishing out the series. Bobby Pendragon is now grown and his decisions have not gotten any easier. The bond of friendships are still what make him such an endearing and flawed character. Halla is pretty chaotic and things are not as they are meant to be. That premise drives the book, shakes up former realities and brings us one step closer to understanding what is really going on in this Matrix-like world of adventure. You have to read this book! Please make sure you read all of the others first, though, as not doing so is pointless. DJ MacHale has done it again and I can't wait for the finale! Hobey Ho, One Mo!
Copyright © 2020 Thriftbooks.com Terms of Use | Privacy Policy | Do Not Sell My Personal Information | Accessibility Statement
ThriftBooks® and the ThriftBooks® logo are registered trademarks of Thrift Books Global, LLC