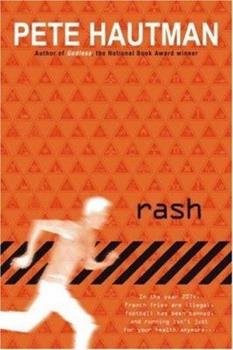 Consumption of alcohol: Illegal. Football and other "violent" sports: Illegal. Ownership of guns, chain saws, and/or large dogs: Illegal. Body piercings, tattoos: Illegal. It's late in the twenty-first century, and the United Safer States of America (USSA) has become a nation obsessed with safety. For Bo Marsten, a teenager who grew up in the USSA, it's all good. He knows the harsh laws were created to protect the people. But when Bo's temper flares...

Published by Thriftbooks.com User , 14 years ago
this was a great book it's funny to hear an idea of what the future will be like and what the people living in the future think of our lives right now. Great book by Pete hautman looking foward to reading more of his books

Published by Thriftbooks.com User , 14 years ago
Hautman's Godless remains one of my favorite teen books, and this one is almost as good. Like many other great science fiction novels, this is social commentary in disguise: Hautman conjures up a sinister future world that has taken some of our current obsessions to extremes, yielding nightmarish results. While I usually think the age recommendations for fiction are too low, the recommendation for this one is too high: middle schoolers will enjoy this book too.

Published by Thriftbooks.com User , 15 years ago
This is a real page-turner of a novel which also made me think and stayed with me after I got to the end. The narrator is a product of a disturbing future in which society has over-protected itself in a ridiculous but scary manner. Along with the dangers of bears, bullies, and brutal football is fun humor and winningly eccentric characters, including Bo the main character who has a wry, engaging voice. One of my favorite books of 2006.

Published by Thriftbooks.com User , 15 years ago
Picture, if you will, life in the year 2076. You are living in The United Safer States of America and things such as obesity, verbal abuse, and dangerous activities are against the law. The legal driving age is twenty-six. Even sports such as football are illegal. Sports that are allowed are hindered due to all the safety gear the participants are required to wear. This is the world that sixteen-year-old Bo Marsten inhabits. Bo has inherited a bit of a temper from his father who has been in prison since 2073 for road rage. He has been in trouble at school many times for "failing to control his antisocial impulses," but when he is falsely accused of causing a rash that spreads throughout the school, his anger gets the best of him and he assaults a classmate. This action lands him in a work camp in the middle of the Canadian tundra that is surrounded by hungry polar bears. The work camp Bo is sent to is a factory that makes pizzas. He becomes a member of a four man team with the responsibility of using the pepperoni gun. Each pull of the trigger on the pepperoni gun delivers twenty-six pepperoni on each pizza. When the team works in sync, life isn't so bad. There is only one group that causes Bo problems while he is there, the Goldshirts. The Goldshirts are an elite group at the pizza factory that have special privileges like a variety of food, when the others only have defective pizzas to eat for every meal, every day. The Goldshirts main job is to play football for the warden. All new editions to the work camp eventually have a tryout in front of the warden. This entails running and catching a pass. If you catch it, you become a Goldshirt and are placed on the team. Bo makes the team and experiences physical activity without protective gear for the first time in his life. The warden requires that the team practice every day for several hours in order to prepare for an illegal game with another work camp. If you want to remain a Goldshirt, you play even if you are injured. After surviving work camp and brutal football games, Bo, with the help of an unlikely attorney, is released from his sentence and allowed to go home. Bo begins to think about life in the USSA and considers where else he can go that would allow more freedom. Pete Hautman has written a unique sports novel for the sci-fi/fantasy lover. This interesting look at what might happen to a society more concerned with safety than freedom is a page-turner. The reader will enjoy comparing today's life with the life Hautman has created. Reviewed by: Karin Perry

Food for Thought, A Fast-Paced Plot, and Teen-Friendly Trappings: Masterful

Published by Thriftbooks.com User , 15 years ago
Rash by Pete Hautman is a wry look at a possible 2070s United States, now called the USSA (United Safer States of America? United Socialist States of America?). In this dystopian society, Americans (as well as people in most other countries) have traded freedom and independence for safety. It's no longer legal to play football, or to run without wearing extensive padding a helmet. Alcohol, cigarettes, temper tantrums, hunting, large dogs - all illegal. Three quarters of people over the age of ten are on the drug Levulor, which slows their reflexes, and helps them to keep their tempers in check. Levulor apparently doesn't work all that well, though, because twenty-four percent of adults are in prison. The government uses prison labor to do the jobs that other people don't want to do, like cleaning septic systems, working on roads, and making frozen food products. People are carted off for all sorts of minor infractions (including "self-mutilation", which can include weighing too much), because their labor is needed in the work camps. Rash is the story of sixteen-year-old Bo, who lives with his ineffectual mother and his nostalgic Gramps, while his father and older brother are off in prison. Sandbagged by a rival, Bo is unfairly blamed for a mysterious rash that spreads through his school. Pushed to the breaking point, he lashes out against his rival, and is sentenced to three years of labor in a prison camp up in the (former) Canadian tundra. The workers in this camp spend 18 hours a day, seven days a week, making pizzas. The camp actually reminded me a lot of the youth offender camp in "Holes", but set in a much colder climate. Taken out of the protective cushion of society, Bo encounters things he's never seen before. Deliberate violence and cruelty. Football. Polar bears. And, surprisingly, the feeling of being part of a team. Meanwhile, an artificial intelligence agent that Bo created before he left evolves into a sentient being called Bork. Bork starts communicating with Bo, and works to rescue him from a land of endless pizza and football. I liked double-entendre of "rash" in the book. Bo is wrongly accused of creating a rash. His real crime is his own rash behavior, in a society where being rash is just about the worst thing a person can be. I also enjoyed the character of Gramps, constantly reminiscing about his youth (when people could actually own guns, and buy beer in restaurants, and wear sneakers). Bork is also a lot of fun - Hautman does a nice job of capturing his gradual shift from computer to independent thinker, and his development of a sense of humor. Overall, I found Rash to be a fast read, one that grabbed my attention from the first page, and didn't let go until I finished. In addition to reminding me of "Holes", Rash evoked a more benign "1984". What's disturbing about this book is that our society is right now on a slippery slope, trading off freedom for safety. We face these questions every day. Hautman takes a l
Copyright © 2020 Thriftbooks.com Terms of Use | Privacy Policy | Do Not Sell My Personal Information | Accessibility Statement
ThriftBooks® and the ThriftBooks® logo are registered trademarks of Thrift Books Global, LLC