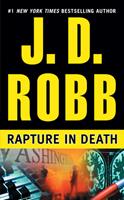 Lieutenant Eve Dallas delves into the world of virtual reality gaming to stop a sadistic killer in this In Death novel from #1 New York Times bestselling author J. D. Robb. They died with smiles on their faces. Three apparent suicides: a brilliant engineer, an infamous lawyer, and a controversial politician. Three strangers with nothing in common--and no obvious reasons for killing themselves. Police lieutenant Eve Dallas finds the deaths suspicious...

A COMPELLING AND CONVINCING READING

Published by Thriftbooks.com User , 20 years ago
Voice performer Susan Ericksen is both compelling and convincing in her reading of this fourth book in the "In Death" series by noted author Nora Roberts writing as J. D. Robb. As was the case with the three previous tales, "Rapture In Death" is a skillful blend of mystery, romance and hi jinks. While Lieutenant Eve Dallas knows her way around her New York precinct and has seen what few can imagine, she's not come up against three apparent suicides - a sharp engineer, a questionable attorney, and a maybe, maybe not politician. Is it possible that someone or something is causing these people to take their own lives? What does our intrepid detective discover as she probes the lives of the lately departed? It's the year 2058 and Eve is supposed to be on her honeymoon with her new spouse at a resort on another planet. After all, this is 50 years hence so we can add sky glides, increased life spans, and the other someday-will-bes that we now read about in sci-fi. The addition of techno thrills spices her story as Roberts spins another spellbinding yarn. This is a good one to listen to while curled up by the fire on a cold winter's night. - Gail Cooke

Published by Thriftbooks.com User , 21 years ago
This is the forth book in this really exciting series. Eve and Roarke were just married,. They are a great couple, both dynamic, strong willed and Roarke has the need to take care of Eve, which she fights all the way. The humor and progress of intimacy throughout their relationship and the series is extraordinary. This book starts on their honeymoon at one of Roarke 's Luxurious hotels off planet that he is turning into a lavish gambling resort. It is still under construction but this way other than the workers the couple had the place to themselves. A young man hangs himself and this does seem to be totally out of character for this man. When Eve and Roarke return home there are a couple suicides which seem to match this pattern. Then even one in Washington. Eve must find the connection between these suicides and prove it is actually murder. This goes deep into the brain waves and a connection to another of Roarke companies. This was really a surprise at the end and an excellent book. I highly recommend this book and all in the series. If you are new to the series start at the very beginning and you will be very pleased!

As good as the others

Published by Thriftbooks.com User , 21 years ago
The fourth book of the In death series by J.D. Robb it starts at the end of Eve's honeymoon at the Olympus one resort. When an egineer is dicovered dead in his room by his roommate. It is ooobviously self termination and Eve goes home back to new York ehere she has to testify for a trial. Then the defendants lawyer is discovered dead also ruled self termination. Then a controversial politician kills heimself.Why are all these brilliant people with graet futures killing themselves.Eve has very little time to find the answer. This book is great but I suggest that you start at the beggining if the series it is less confusing.

Published by Thriftbooks.com User , 22 years ago
I have read most everything Nora Roberts has written, including her Language of Love Series from years ago... I am now reading the JD Robb series featuring Lt. Eve Dallas. WHAT an imagination Roberts has! To imagine the future through her eyes... I love the way Eve and Roarke interact. She is her own person and he loves her for this-never trying to make her something else. And, at the same time, she is able to admit that she needs someone too!I loved Rapture in Death. This is perhaps the best "Death" book so far. The VR Goggles were a trip! The idea of manipulating musical undertones to control a person's behavior... Where does she get her ideas? So believable!

Published by Thriftbooks.com User , 23 years ago
I have read just about everything Nora Roberts has written and have just discovered her as J.D. Robb. She's wonderful! I love the romance, especially the way Rourke takes care of Eve - with or without her knowing (I want a Rourke too); the humour - the quiet little mutterings under their breath, and the quiet smiles; the mystery - how Eve puts herself into the crime scene and works through everything and of course her aide Peabody. I like the growing friendship and respect between two strong women who can defend themselves yet not be afraid to be women and have a healthy relationship with a man.Robb has it all in her books. I read her first one and went back to buy the entire series. I can hardly wait to get to the next book. I just hope that by the time I'm caught up there will be another one in print.Whether she goes by Nora Roberts or J.D. Robb this lady knows how to get your interest and keep it.
Trustpilot
Copyright © 2022 Thriftbooks.com Terms of Use | Privacy Policy | Do Not Sell or Share My Personal Information | Accessibility Statement
ThriftBooks® and the ThriftBooks® logo are registered trademarks of Thrift Books Global, LLC