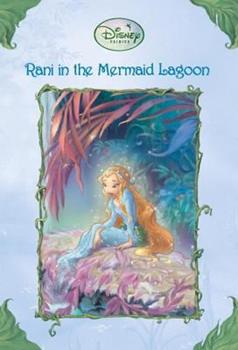 Rani in the Mermaid Lagoon:

(Book #5 in the Tales of Pixie Hollow Series)

Published by WinnieRainyStem , 6 months ago
Arrived 10 days early. Very good condition, cover was a little bent but I was able to bend it back into shape.

Rani is the sweetest

Published by Fanny , 2 years ago
A sweet story about my favorite fairy in Pixie Hollow. Or one of them with Silvermist. The theme about finding the place where one belongs, is sweet

Published by Thriftbooks.com User , 14 years ago
My favorite book is Rani and the Mermaid Lagoon. The book theme is good vs evil and it's a fairy tale. It's about a mermaid that feels left out because she thinks her talent is not good and because she has no wings. She runs away and gets caught in a bad storm. Rani's bout sinks and it gets ripped to shreds. Some mermaids come along and see Rani passed out on a rock they give Rani some power to stay under water They give her a makeover and then they send her to get some kind of treasures. Does she get caught? Read the book and you will find out. This book is recommended for all people. It is fantastic that's my personal opinion.

Published by Thriftbooks.com User , 15 years ago
Fairy society is built upon being tiny and having wings. Rani's heroic sacrifice of her wings (in a previous adventure) has left her handicapped and without a clear place in Pixie Hollow. Rani goes questing in search of a new home. Very well written. The story stays focused, correctly, on Rani. Lisa Papademetriou does not make the mistake of giving Rani ALMIGHTY water super powers. This is not an "Aqua-girl" story. I was disappointed that the mermaids were not a bit more like Disney's "Little Mermaid" Ariel, but this is the universe of Peter Pan and besides Ariel is not your typical mermaid. The CD version is read by Quincy Tyler Bernstine. I could listen to her voice all day.

this book was fun.

Published by Thriftbooks.com User , 15 years ago
I like fairies, especially Rani. This book has beautiful pictures. I recommend that anyone interested in Fairies, read this book. K

Rani in the Mermaid Lagoon

Published by Thriftbooks.com User , 16 years ago
I think this book is great! If you love fairies, THEN THIS BOOK IS FOR YOU! The other books in this series are great too. Rani has cut off her wings to save Neverland. She doesn't feel like she belongs to the fairies after she ruins a dance. So she runs away and goes live with the mermaids in the Mermaid Lagoon. But then she realizes how much she misses the Pixie Hollow and would rather face mean Vidia than the mermaaid Oola and her snobby friends (in my opinon). She also misses the feeling of the wind blowing against her hair when she's flying on the back of Brother Dove (who is her wings) instead of riding on the back of her seahorse friend. What does she chose to do, go back the Pixie Hollow or stay with the seahorse's family underwater? Find out when you read the book!

THIS BOOK IS SO TOTALLY COOL!! IT IS A MUST TO READ!!

Published by Thriftbooks.com User , 16 years ago
Reporter's Opinion: I thought this book was awesome! I love all of the Disney Fairy books, but this one was great! Summary: Rani previously cut off her wings to save Mother Dove, and Neverland, but now, she was the only fairy without wings. Even though Brother Dove let Rani ride on his back to get to where she needed to go, she felt like she didn't belong with the water-talent fairies anymore, but once she messed up the whole party, she felt like she didn't belong with any fairies at all! So, she decided to move to Mermaid Lagoon. When she got there, all of the mermaids were so excited to have a fairy, but once one of the mermaids, Oola, showed everyone her new ring, everyone forgot about Rani. Rani, then met a sea horse, and he got her a glowing pearl. Then, Rani went back to Pixie Hollow, and they had a party for her. They even made a dance with no flying! All of the light-talent fairies were so happy that they can now light up the water fountain with the pearls, and Rani got to put the jet on the top of the fountain. Rani was an official water-talent, and light-talent fairy. Rani felt like she really belonged in Pixie Hollow.
Trustpilot
Copyright © 2022 Thriftbooks.com Terms of Use | Privacy Policy | Do Not Sell My Personal Information | Cookie Preferences | Accessibility Statement
ThriftBooks® and the ThriftBooks® logo are registered trademarks of Thrift Books Global, LLC