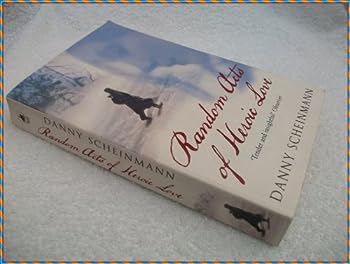 With over 200,000 copies sold in the UK, a Richard & Judy pick, rights sold in 19 countries, called "riveting" and "mesmerizing," this is a cinematic debut from a gifted new writer. Based on real... This description may be from another edition of this product.

Published by Thriftbooks.com User , 13 years ago
This was a beautifully written story which I was sad to see end. It truly touched my heart. I was totally transported into these people's lives. The stories were so different, yet the same--the journey we call life. I can't wait for Scheinmann's next book. Bring it on!

Published by Thriftbooks.com User , 13 years ago
This wasn't a book I would have chosen...possibly because the title had the word 'love' in it and possibly because it was a Judy and Richard recommendation (they DO review some good books, but the fact that they never seem to dislike any...whereas I do....puts me off). However, it was picked for the reading group I belong to and... I loved it!! Love does play a major part , but not in a soppy way. The book begins with Leo who wakes up in hospital in South America to the realisation that his girlfriend Eleni is dead...then the chapters alternate between Leo's story and that of Moritz Daniecki a young soldier caught up in WWI on the Russian Front. In between the chapters are journal pages which include factual information on the trials of love in the animal kingdom; from crabs to elephants...sounds odd but is relevant and interesting. This book is stunningly realistic, whether it's the battle of Gnila Lipa and the graphic description of war, backpacking in South America or the fun and friendship of university. Roberto was fascinating, I can't have been the only reader considering researching quantum physics can I? ;-) Overall though, it makes you realise the importance of having someone to talk to who understands, the knowing that you're not the first person to have known grief and...the realisation that life does go on. Humourous...sad, heroic, brave, inspirational...a book to cover all emotions.

Published by Thriftbooks.com User , 13 years ago
When I'm desperate for a good book, I turn to Book-of-the-Month Club, one of the best sources for mid-list writers who don't get a lot of promotion. That's where I found Danny Scheinmann's RANDOM ACTS OF HEROIC LOVE. RANDOM ACTS is really two parallel stories. In 1917, Austro-Hungarian soldier Moritz Daniecki escapes from a Siberian prison and walks seven thousand kilometers to find Lotte, the girl he left behind. He has several near-death experiences but his quest for Lotte keeps him alive. This one is based on Scheinmann's grandfather's experience. The second story jumps ahead to 1992. Leo Deakin's wife, Eleni, is killed in a bus accident in Ecuador. He blames himself and has an awful time getting over her death. Leo's thread takes some time to develop; he's a doctoral candidate, studying ants. Lots of people try to help him overcome his grief. Perhaps the most interesting is Roberto Panconesi, a physics professor with a unique perspective on the afterlife. Leo attends his lectures and keeps a notebook with illustrations. They're included in the book. I began to look forward to them; they're about love occurring in the natural world. Red ants mate in mid air. The Arctic Tern circumnavigates the globe to breed in the Arctic. It takes Scheinman almost three hundred pages to connect the two stories. I chose this book because of the POW story and wound up loving it because of the Leo story. Roberto Panconesi shows Leo that colliding atoms are irretrievably connected until another relevant collision occurs. In other words, Leo won`t get over Eleni until he finds another girl.

Phenomenal book that deserves to be read

Published by Thriftbooks.com User , 14 years ago
I bought this book on a recent trip to England, where it is available everywhere in paperback. For a good part of the book I was happy to be reading a well-written, enjoyable story (or two stories, as it seems), and it was only at about 2/3 of the way through that the hyperbole surrounding the book became obviously justified. When I was done, all I could think was "wow" and wish forlornly that there was still more to read. A truly wonderful little book, that deserves publication and mass distribution in the U.S.

Published by Thriftbooks.com User , 14 years ago
Five stars are not enough! 'Random Acts of Heroic Love', is an incredible debut novel from Danny Scheinmann. A labour of love in itself; in his acknowledgements the author says it took six years and numerous drafts to get it right, but all that painstaking work has paid dividends. It's a wonderfully rich, insightful and wrenchingly emotional novel. The story begins in 1992 with Leo, a young PhD student, waking up in an Ecuadorian clinic to find that his girlfriend Eleni is dead. Eleni. His soulmate. The other half of his whole. She's been killed in a bus crash they were in - the only victim of the crash. Leo's loss, and his attempt to go on living, picking up the pieces of his previous existence, without Eleni, is just one half of the book. Leo turns to Physics to try and find some answers and interspersed throughout the pages of the novel are facsimile pages from a journal Leo was keeping to help him get through Eleni's death... One of the quotes Leo finds is the one I used for the title of my review. The other story, which picks up at chapter 3, is every bit as heart-wrenching. It is the story of another young man from Galicia, Moritz Daniecki, caught up in the war on the Russian Front as a soldier from 1914 through to 1917. In 1914 before the outbreak of war, young Moritz meets the love of his life, Lotte, and they declare their love for each other before Moritz goes to war. During the war he suffers unbearable conditions before finally escaping from a prisoner of war camp in Sibera. Moritz tells the story of how he is driven across the Siberian wilderness by his everlasting love for Lotte. It is her memory and the letters that he writes to her that keeps him going on his journey... not knowing what he will find at the end. The two stories are truly beautiful. Both young men are kept going through each and every day by their memories of love, and the connection between the two is revealed at the end (if you haven't already guessed). Superbly written. The harshness of a Siberian winter and First World War horrors are vividly brough to life by Scheinmann. The book takes you on a non-stop emotional roller coaster and only those with cast-iron feelings will remain unmoved! An exceptional book.
Trustpilot
Copyright © 2022 Thriftbooks.com Terms of Use | Privacy Policy | Do Not Sell or Share My Personal Information | Accessibility Statement
ThriftBooks® and the ThriftBooks® logo are registered trademarks of Thrift Books Global, LLC