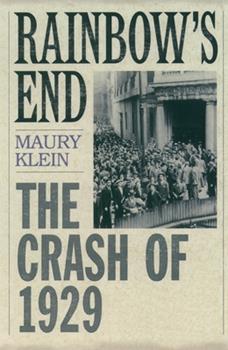 Rainbow's End tells the story of the stock market collapse in a colorful, swift-moving narrative that blends a vivid portrait of the 1920s with an intensely gripping account of Wall Street's greatest catastrophe. The book offers a vibrant picture of a world full of plungers, powerful bankers, corporate titans, millionaire brokers, and buoyantly optimistic stock market bulls. We meet Sunshine Charley Mitchell, head of the National City Bank, powerful...

One of the best books to learn about the market and enjoy it too!

Published by Thriftbooks.com User , 16 years ago
I have to admit I am a bit biased since I am interested in the Stock Market and especially the present market's similarity to that of the time referred to in the book. But, it's a lot more than that! It is very well written and though it probably is written for those 11th grade and higher, it is easy to read. It is loaded with real-life history. My wife has already completed it and I am part done. We plan on having our oldest four children read it. The prologue on the 1929 summer seemed to place you right there--even though I never visited New York City itself. My wife mentioned it made the stock market easy to understand especially margins and short selling. I think she also mentioned puts and calls, which is the one area of the stock market I would like more practice with. If you are into history or want to really learn about the market, this is the best place to start. Highly recommended! Tom from Michigan

Published by Thriftbooks.com User , 19 years ago
Maury Klein, in his book Rainbow's End: The crash of 1929, has given us a blend of a newer style of historiography with the traditional sense of examining historical events. He has given us a look at the Stock Market Crash of 1929 through the eyes of the people that participated, rather than looking at it strictly from an economic or political historical viewpoint.Klein starts his book with a description of American society in the 1920's and explains to us why the society of excess and speculation led to the crash moreso than a failing of the general American economy. By dotting the landscape with characters, some familiar and some unfamiliar, Klein gives us a good portrayal of the times.There is, unfortunately, only a short section of the book that actually deals with the events of the crash itself. This section focuses the days between Black Thursday and Bloody Tuesday, which culminated in a horrific period of losses in the market.Klein does a good job of staying on task during the sections of the book in explaining the economic factors and the behind-the-scenes actions that took place during these few hectic days. He does not, however, explain the immediate social ramifications (such as the fact that people who lost everything gave up on life) as well as might be expected; he gives this facet of the crash only peripheral coverage.I would recommend this book to anyone that is looking for a socio-economic history of America during this 1920's. It does a very good job of covering this topic. However, if one is looking for details just on the crash itself and those few terrible days on Wall Street, that reader would be well served to find another book to read.

An intriguing argument is presented, here

Published by Thriftbooks.com User , 20 years ago
Maury Klein's Rainbow's End: Crash Of 1929 reveals the story of the Wall Street stock market collapse in 1929 using a narrative which focuses as much on the cultural and economic forces at work during the times as it does of the actual crash and the nation's descent into depression. Was the crash an unusual event in which coincidence played more than a small role? An intriguing argument is presented, here.

Published by Thriftbooks.com User , 20 years ago
Rainbow's End, by Maury Klein, will not cheer you up, but it is the best history of the stock market crash of 1929 I've ever read. Klein provides a detailed history of the unfolding of the crash and places it in the economic and social context of the times. His chapters on the key personalities both deepens our understanding of the crash and makes for fascinating reading.
Trustpilot
Copyright © 2022 Thriftbooks.com Terms of Use | Privacy Policy | Do Not Sell or Share My Personal Information | Accessibility Statement
ThriftBooks® and the ThriftBooks® logo are registered trademarks of Thrift Books Global, LLC