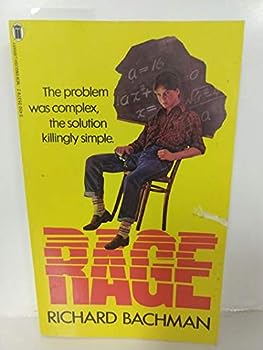 This description may be from another edition of this product. This is an example product description.

Published by Thriftbooks.com User , 16 years ago
After the Columbine tragedy, Stephen King basically had all copies of Rage pulled from the shelves - understandable yet unfortunate, as King had always been a stalwart opponent of censorship. The novel, though, features a high school student who wigs out, shoots two teachers, and holds his class hostage for several hours. On the face of it, that's what the novel is about, but it's really much more involved than that. The real heart of the story is the way the students react to their captor during their ordeal; they go way beyond merely sympathizing with him. It's a little fanciful and simplistic but highly fascinating, and it shows amazing talent from such a young author. King began the novel, which he originally called Getting It On, when he was a senior in high school (1966), and he brought it back out and finished it five years later. In 1977, it became the first novel King released under the name Richard Bachman. The story isn't polished or fleshed out completely, but Rage bears many of the hallmarks that would make Stephen King the world's best-selling author. For me, the most extraordinary thing about this short novel is the fact that I can almost hear Stephen King reading the words aloud in a number of places - I've never experienced this feeling in any other King novel. There is a very close connection between writer, reader, and characters in this dark story of teen angst taken to an extreme. King explores some very adult aspects of Charlie's psychological development, and he doesn't stop there - he takes us right inside the minds of several other young characters before he's through. It's like Lord of the Flies, only different and more emotionally slippery. Charlie Decker has some problems; not long ago, he cold-conked his chemistry teacher in the head with a metal pipe. Now back in school and closely monitored by the principal, he snaps at the perceived injustice of it all, calmly shoots his teacher and a second teacher who pokes his head in the room, and basically takes his classmates hostage. In his parlance, he is most definitely getting it on. While his classmates are shocked and frightened at first, they settle in rather quickly to the situation, begin to commiserate with their captor, and eventually sort of take over the whole show as an us against them mentality blossoms in that secluded room. Secrets are revealed, accusations are made and answered, and Charlie is not the only one to open up and talk about his inner demons. Negotiators are less than effective in talking Charlie out of the situation, and all but one of the kids really has no use for their self-serving efforts. That one boy, Ted Jones, is a problem - he's got ideas about being a hero, and he keeps wearing a peculiar grin that proves just how much Mr. Cool is hiding beneath his mask of popularity. The rest of the kids actually seem to want to stay there with Charlie; they're learning a whole lot about themselves and their classmates. Charlie ini
Copyright © 2020 Thriftbooks.com Terms of Use | Privacy Policy | Do Not Sell My Personal Information | Accessibility Statement
ThriftBooks® and the ThriftBooks® logo are registered trademarks of Thrift Books Global, LLC