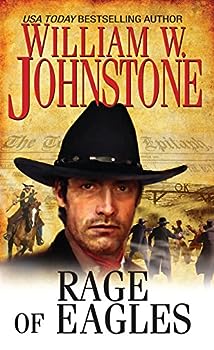 (Book #5 in the Eagles Series)

This description may be from another edition of this product. The Greatest Western Writer of The 21st Century Justice Gets Its Revenge Jamie Ian and Kate MacCallister are together now, buried side by side on a ridge overlooking the huge Colorado valley they had...

tracking says delevered, but did not receive. Better to order through Amazon where there is recourse

Published by Thriftbooks.com User , 2 years ago
Did not receive, therefore cannot rate.

Published by Thriftbooks.com User , 23 years ago
William W. Johnstone has done what I did not think was possible.... He has taken his "Eagles" series and after "killing off" the main character of Jamie Ian Mac Callister in the prior story (Scream of Eagles)... taken the series to a new level of excitement. "Rage of Eagles" tells the begining story of the Falcon Mac Callister Legend. While not using the historical references as he has done in the first four "Eagle" books... Johnstone has created a story that if you are a fan of Westerns at all... You will not be able to put down.... If you have not read the first four books in this series... (DO SO!) but this book is written so that a newcomer can enjoy the continuing saga of the Mac Callister Clan

This is a really good book.

Published by Thriftbooks.com User , 23 years ago
I read it in one setting. Everything he writes is great and I've read them all. He's made Falcon a legend. I can't wait for more.
Copyright © 2020 Thriftbooks.com Terms of Use | Privacy Policy | Do Not Sell My Personal Information | Accessibility Statement
ThriftBooks® and the ThriftBooks® logo are registered trademarks of Thrift Books Global, LLC