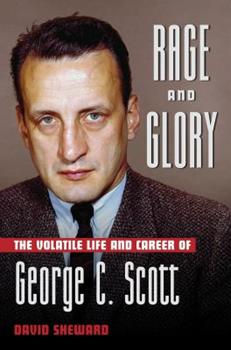 Rage and Glory: The Volatile Life and Career of George C. Scott

George C. Scott (1927-1999) born in Wise, Virginia, created some of the 20th century's most memorable performances on stage and screen - the cunning prosecutor in Anatomy of a Murder, the manipulative gambler in The Hustler, the buffoonishly warmongering chief of staff in Dr. Strangelove, and, of course, the brilliant and rebellious Patton. He also played Willy Loman, Richard III, Mussolini, Scrooge, Fagin, and countless others. But his offstage life...

Published by Thriftbooks.com User , 13 years ago
I personally know the author. I was disappointed in the book. 1-It was poorly edited 2-Although Scott is described as a private man his multiple marriages and abusive, violent behavior in public seems to belie the "private" description. 3-The book starts in a serious vein but at points becomes chatty and gossipy.

Excellent study of Scott -- One of cinema's giants

Published by Thriftbooks.com User , 13 years ago
FINALLY A BOOK ON GEORGE C. SCOTT...AND A DAMNED FINE ONE!!! George C. Scott was among the greatest actors in movie history, his performance in Patton (1970) one of the greatest pieces of acting ever put on film. But he was a man plagued with rage, self loathing and a ferocious temper that exploded it seems at the most inopportune times. He was a difficult interview (trust me, I tried) but possessed the ability to channel most of his rage into his work. Sheward's book is excellent, a fine study of a man we will never understand because he never understood himself. The author captures the many contradictions that made Scott the prickly personality he was, but the writer also captures the sublime artist that was Scott.

Published by Thriftbooks.com User , 14 years ago
YES, I DID ENJOY READING THS BIO FROM COVER TO COVER. HE WAS TRULY ONE OF OUR GREATEST ACTORS OF THIS PAST CENTURY. BUT HE WAS A DEEPLY DISTURBED MAN.MY MAIN BEEF WITH THIS AUTHOR IS THAT IN THE FIRST PAGES OF THE BOOK, HE NEVER ONCE MENTIONS HIS HERITAGE. I EVEN WENT SO FAR AS TO CONTACT THE PUBLISHER THRU EMAILS AND PHONE CALLS TO GET THIS QUESTION ANSWERED. NO RESPONCE!!! THAT REALLY GOT MY GOAT. NINE OUT OF TEN AUTHORS THAT WRITE BIOGRAPHIES ALWAYS , IN THE OPENING PAGES, PUT IN IMPORTANT FACTS. SUCH AS DATE OF BIRTH, HERITAGE,AND SO ON..BUT IT WAS VERY INFORMATIVE..FRANK TAGLIERI

Published by Thriftbooks.com User , 14 years ago
I have other books by this author and I'm a huge fan. this is a very compelling read. I highly recommend it.

Yet Another Great Talent Dogged by Inner Demons!

Published by Thriftbooks.com User , 14 years ago
David Sheward's book missed the mark with its title. Rather than RAGE AND GLORY, it should have been titled RAGE AND MORE RAGE. No actor was better able to project that emotion than George C. Scott. In a roller-coaster career topped by winning the gold for PATTON, he portrayed a number of fascinating yet repellent characters brimming with rage, avarice and many other unlikeable characteristics. Tragically his personal live was as unhappy and self-destructive as many of the roles he played. Sheward takes a long-overdue look at this unique individual. Scott's beloved mother died early; his father was distant and uncommunicative. Growing up with a chip on his shoulder, Scott discovered alcohol and the die was cast. Wanting the security of marriage, he went through a series of wives yet each marriage floundered as Scott ran away from the responsibility that went with the marriage. Intensely shy yet bubbling with barely surpressed anger, he made few friends. His record in Hollywood and Broadway was as mixed, some hits and many misses. Yet whatever he was in, Scott was always eminently watchable and, especially in movies, often stole the spotlight from the film's star. THE HUSTLER, for example, was Paul Newman's film but Scott's Bert Gordon character was the one that held your attention. His memorable line at the movie's end - "You owe me MONEY!" grabbed the viewer by the collar. Likewise Scott's loony-goony General Buck Turgidson in DOCTOR STRANGELOVE was a hoot. Sheward does a workmanline job of chronicling Scott's tempestuous life and career. Though he apparently had input from almost 50 Scott family members and friends, he seems to have relied awfully heavily on previously published books, magazines articles, etc. After reading RAGE AND GLORY, I had one thought: "What glory?" Scott certainly triumphed in the awards category with Oscars, Obies, Tonys, etc. but did they bring him happiness? Sheward's book makes me wonder if this talented yet troubled man ever knew happiness. You'd like to hope so. Movie fans will want to add RAGE AND GLORY to their collection. It tells you everything you wanted to know about George S. Scott and more. Recommended.
Trustpilot
Copyright © 2022 Thriftbooks.com Terms of Use | Privacy Policy | Do Not Sell My Personal Information | Cookie Preferences | Accessibility Statement
ThriftBooks® and the ThriftBooks® logo are registered trademarks of Thrift Books Global, LLC