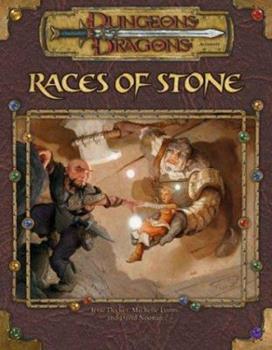 A new D&D sourcebook detailing various mountain-dwelling races. Races of Stone provides Dungeons & Dragonsreg; players with an in-depth look at races that live on, under, or around mountains in the D&D world. There is extensive information on the classic races of gnomes and dwarves, including new rules, information for interaction, new spells, and new magic items attuned to each race. In addition, there are new races, over 20 new prestige classes,...

Published by Thriftbooks.com User , 13 years ago
I bought this a as a gift for my brother in law and he absolutely loved it!

Published by Thriftbooks.com User , 14 years ago
There are some neat feats and build variations in this book. I also like the in depth description of dwarven culture. Oh, I'm sure the gnome and goliath are good too, I just haven't read them yet.

Published by Thriftbooks.com User , 16 years ago
Races of Stone brings insight into the lives and social structures of dwarves and gnomes. It also offers the same insight new races such as the goliaths that are great for pcs and npcs alike. This book offers great information for both players and DMs.

Dwarves and Gnomes would be pleased...This one's a gem.

Published by Thriftbooks.com User , 17 years ago
While Races of Stone isn't quite on par with say Libris Mortis: The Book of the Undead or Frostburn, it is certainly one of WotC's best 2004 releases. Considering some of the dreck that saw print last year (Player's Guide to Faerun, Planar Handbook, Complete Divine) I would say this was one of my favourites. Of course, it basically boils down to whether or not you like Dwarves and Gnomes (I do) or have use for a new mountainous race called Goliaths (I can take them or leave them). The breakdown of the three races in terms of culture, philosophy, religion, history and so forth can add a nice touch to your characters (or your campaigns), particularly if you're building only on what you have from the core books. The assortment of Prestige Classes and Feats is relatively good, but you'll probably come away with the sense that the Goliaths receive just a bit more attention than our traditional rocky friends. There's been much debate over the newcomers in the Races series and most of it deserves saying. While I don't mind the Goliaths (in fact, I might use them in upcoming campaigns) I feel that their presence ate up space that could have given a bit more depth to the Dwarves and Gnomes. (This problem, which isn't quite so noticeable in this volume, returned with a vengance in the follow-up: Races of Destiny, in regards to the book-hogging Illumians.) All said Races of Stone is, if you'll pardon the expression, solid as a rock. It gave me great hope for the other books in the series and, indeed, hope for the future of WotC's products. While I can't say that hope lingered long, I still feel Races of Stone is a strong addition to the D & D library and I'm glad it's on my shelf. If Races of the Wild is as good as this one I'll be most pleased.

Published by Thriftbooks.com User , 17 years ago
I've always liked dwarves. There've been a great many d20 racial splatbooks, few of which I've liked, and the only one I own is for dwarves. Now, WotC has decided to do its own racial splatbooks, and the first effort, detailing dwarves, gnomes, and a brand-new race, the goliaths, is actually a very good product. One of the striking differences between Races of Stone and, say, the Planar Handbook, is that the primary focus of this product is what's known as "fluff"; i.e., information that is not strictly related to rules, but that details things like history, mannerisms, behavior, etc. For example, dwarves make a great variety of their clothes from root fibers! This has no real game effect, but it's nice information to have. There are sections for each race in this book, with the goliath section being a tad longer, since they're new to Races of Stone. Speaking of goliaths, they're a primitive nomadic mountain-dwelling race; they're almost like evolved apes. They're very competitive, and quite strong. Their society is detailed in a lot of detail, and there are rules aspects that are non-obvious; despite having a Dex penalty, for example, they have a great fondness for ranged weapons. Also included are variant races...chaos and whisper gnomes, dream dwarves, stonechildren, and feral garguns (who're relatives of the goliaths that live in even more unpleasant circumstances). However, there is a very nice proportion of game mechanics goodness to be found (this is known colloquially as "crunch"). There are many new feats that are appropriate for the given races, new equipment (like exotic armors!), racial substitution levels (where you get an alternate class ability in place of a standard one, but only if you qualify by your race or other factors), and quite a few nifty prestige classes. There are a few spells and magic items (like forges that let non-casters create magic items, with some severe limitations), too. There are even adventure seeds that are more appropriate for the races of stone, as well. Quite possibly the best new thing is that they don't assume you just have the Player's Handbook, as there is support for the Expanded Psionics Handbook, in the form of additional psionic feats and powers! This is very new, and very welcome, to boot. I'm quite pleased with Races of Stone. It certainly washes out the bad taste of certain previous releases. I wholeheartedly recommend it.
Trustpilot
Copyright © 2022 Thriftbooks.com Terms of Use | Privacy Policy | Do Not Sell My Personal Information | Accessibility Statement
ThriftBooks® and the ThriftBooks® logo are registered trademarks of Thrift Books Global, LLC